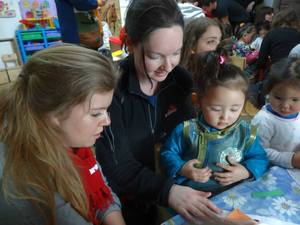 Spearheaded by Professor Karl Moore, the Hot Cities of the World Tour, in its sixth year, has the slogan “Taking the future to the future”.

This year, 40 McGill Desautels Faculty of Management undergraduate students and alumni traveled with two professors to Ulaanbaatar and Seoul to meet with leaders of industry, political figures and members of the Canadian diplomatic corps to discuss everything from mining (with Rio Tinto) to women’s access to healthcare (with a member of parliament in Seoul) and to learn what it really means to do business abroad.

A significant aspect of the trip – which can be taken as a course – is the charity component, introduced by student leaders on the past trips to India and South Africa. Every year, the students choose a local organization to visit and fundraise for so that the trip is not solely focused on business.

This year, that charity was the Veloo Foundation, an organization that takes a holistic, community-based approach to reducing urban poverty and class differences in the northwest ger district of Ulaanbaatar.

Following the economic boom, very rapid urbanization in Ulaanbaatar led to the creation of districts with very limited infrastructure and a very high level of poverty. Limited vocational training and employment opportunities for unskilled and semi-skilled labour means that many people have had to resort to other means to survive.

The Veloo Foundation, founded by Julie Veloo, currently runs a kindergarten, the Sanctuary of the Peak, for 40 children who would otherwise be working with their parents as garbage-pickers in a nearby landfill. The school provides a warm, safe space for the children there, and is also the first permanent community building in the area. 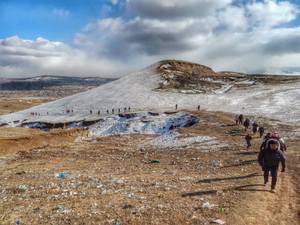 Students from the Desautels Faculty of Management at McGill University hike up to the dump in Northwest Ulaanbaatar. Photo credit: Cate Anthony

For students on the trip, the charity is often one of the most memorable experiences, as it presents a very human aspect of the country they are visiting. For me, the charity is an essential component, especially since as a business school student, we talk a lot about the theories behind social corporate responsibility without always seeing it in action.

I’ve always believed that at the end of the day, you have to be able to look at yourself in the mirror and be comfortable with the choices you’ve made and your contribution. So, for me, going abroad and learning about economic opportunities without being educated about the social and environmental impact is totally unthinkable.

As a group of students from an elite university in a first world country, it is easy for us to go into a country like Mongolia and focus on the future and its potential for investment and economic development. It’s easy to see the social problems that are at play and separate them from the economy, saying that it is up to the government to deal with them.

Ultimately, however, to invest in a country means investing in its development as well and this makes sense both from an economic and social point of view: the real power in a country comes from the population and from their potential as a workforce and group of innovators. To focus on foreign investment without valuing the local population and their knowledge of the issues that most affect regional businesses is to invest blindly and non-sustainably.

Of course, there’s also the advantage gained from being seen as a responsible and ethical investor and business, but I don’t think that should be the motivating factor behind corporate social responsibility either – though I harbour no illusions that for many companies, goodwill and public image are the priority.

To me, there is the potential for a disturbingly paternalist side to trips like the one that we undertake, and that is only partially assuaged by fundraising for a local charity, since it can often seem like it is just a token gesture. While the fundraising work done for charities in South Africa, India and Russia was hugely important and very beneficial for the organizations concerned and their project development, the consulting initiative we are starting this year aims to move beyond aid and towards a “trade” approach.
What we want to build is a strong partnership, one that relies on sharing skills and knowledge so that we can help establish sustainable, long-term change. 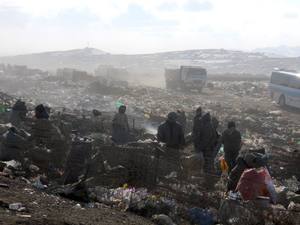 One of Ulaanbaatar’s newest landfills. Over 11,000 people rely on the landfill to survive; people here scavenge for food, fuel and recyclables such as bottles that they can sell to garbage collecting companies. Many of the people working here are under the age of 15. Photo credit: Victoire Scherer
Our fundraising goal for the Veloo Foundation is $20,000 – this money will go to building a new communal shower block in Ulaanbaatar’s ger district (most of the people living there have to walk up to 45 minutes in the cold to get to the nearest communal shower, and many of the people working on the dump have not showered in over six months), building a new school so that more children can go to kindergarten, setting up a “clothing library” so that students can borrow clean clothes to be allowed access to the local public schools and establishing an after-school and homework help zone for older students.
All donations, no matter the size, will help immensely and go directly to supporting the children and the initiatives mentioned above. To donate or to learn more about the cause and the course, please visit: http://blogs.mcgill.ca/desautels-hotcities. Thank you for your support.

Top Photo: BComm student Sabrina Otrowski and McGill alum Melanie Walsh help some of the children at the Sanctuary of the Peak with their Mother’s Day cards. Photo credit: Melanie Walsh

Aliénor Lemieux-Cumberlege is a fourth year student majoring in Honours East Asian Studies, with minors in Education and Management. She will be working with the Global Equity in Health Systems and Non-Communicable Disease Prevention programs at the International Development Research Center in Ottawa this summer, and can be reached at alcumberlege@gmail.com.

B Corp certification is distinct from the benefit corporation form of business that is legislated in many U.S. states.