In our ongoing series on conscious corporate citizens worth watching, SEE Change talks with Aeroplan and their recent efforts at giving back.

It was a cool October afternoon when I landed in Montreal in time to witness approximately 300 Aeroplan employees, from Vancouver, Toronto and Montreal, begin one of their Aeroplan Days activities: peanut butter and jelly sandwich-making. The goal was to feed homeless youth, in partnership with Dans La Rue (http://www.danslarue.com), a Montreal-based charity dedicated to supporting homeless youth in Montreal.

Designed to foster employee engagement and nurture internal community, Aeroplan Days are held every year, typically organized around a variety of team-building activities. But this year they decided to take it further, says Kevin O’Brien, chief commercial officer. “For the first time, we’ve included a community element to the event.” An extension of their commitment to community engagement, Aeroplan partnered with Dans La Rue, offering employees a unique 24-hour experience: supporting homeless youth and getting a glimpse of what life is like for them.

Reporting on corporate social responsibility efforts often comes with a dose of cyncism, some of it perhaps warranted – nonprofit partnerships are a great way to garner publicity, after all – but some, I admit, is not. Truth is, for nonprofits today facing government cuts and severe competition, corporations can be vital in their sustainability efforts. “Less than 6% of funding comes from the government,” echoes Dans La Rue executive director, Aki Tchitacov, “the rest we get from partnerships like Aeroplan; they give us tools to help us help them [the homeless],” he said.

What’s more, while money is nice, the return on awareness is too. “The money is amazing; it helps us feed youth and provide services,” Dorothy Massimo, director of development and communications explained. “But what’s really important is the education of the general public.” Even if the event sensitized 75% of the employees who took part, the ripple effect – they’ll talk to friends and family – has huge potential. “It’s really about the growing impact of sensitizing people to the plight of the homeless.”

The other reality is, no matter how you slice it, corporations are made up of people – mothers, fathers, grandparents – for whom building healthier communities is an ever-growing priority. For Aeroplan employees, having the opportunity to help Dans la Rue, a small organization with 65 staff and 135 volunteers who Tchitacov calls, “the place of last resort for homeless youth,” is one many seemed to appreciate. 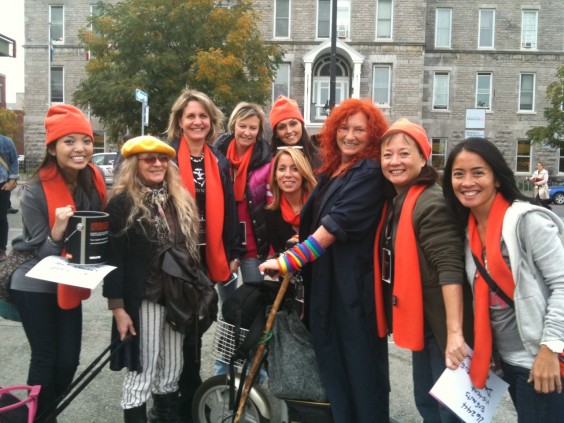 Their enthusiasm was perhaps best exemplified with the standing ovation they offered special guest Joe Roberts as he made his way to the stage that afternoon. There is perhaps no better mentor for disadvantaged youth than Mr. Roberts, for whom a bridge in downtown Vancouver was once his self-appointed home and who stands now a multi-billion dollar success story. “In the old days they called me lowdown and dirty scumbag,” he relates. “Now they call me CEO”.

He proceeded to share his life story – “not as a victim but as someone who’s overcome challenges” – including an abusive alcoholic stepather, drug use, prison time, living on the street and panhandling. He finally got out of the vicious cycle, acquiring two college diplomas, making his first million before 35, running Vancouver’s leading multimedia companies and being recognized by Maclean’s magazine as one of “10 Canadians who have made a difference.” Roberts, today also a motivational speaker, (http://www.skidrowceo.com), ended his presentation by remarking: “I am here thanks to people like Dans La Rue.”

With that inspirational message, the group was deployed to subways stations across Montreal with one clear objective: find creative ways to panhandle while telling the Dans la Rue story. “I’m turning this room into a whole bunch of hope dealers,” said Roberts with a laugh. 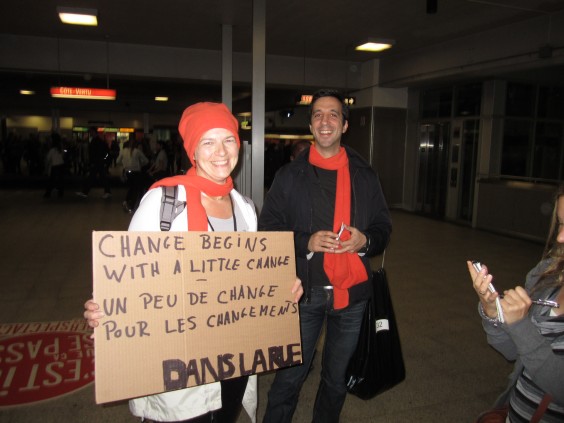 As I traveled from one metro stop to the next, I witnessed employees succeed and falter on the oft-challenging mission. I, for one, did not envy their task, which some carried out through song, others with colourful, impactful signage and some adopting pretty assertive methods. It’s not easy getting rush-hour commuters’ attention. Which made their tally of over $8,000 pretty impressive (add that to their online donations of $25,000 which was matched by Aeroplan for a total donation of $66,000 and it’s even more impressive still). 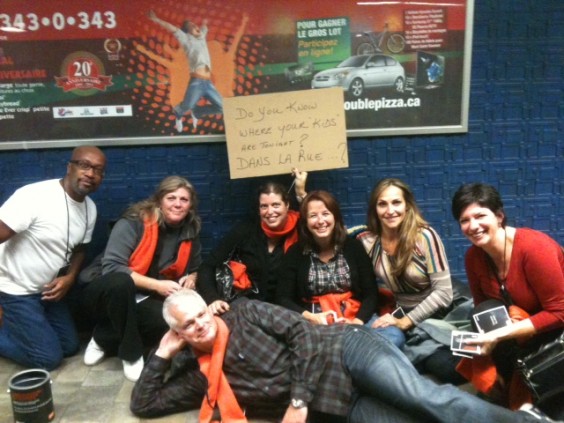 Employee Nathalie Belanger raised $2,000 and was moved by the experience. “It’s great that the company is supporting such a terrific organization,” she declared. “It makes me proud to be working here.” Her enthusiasm was shared by fellow panhandler-for-the-day, Jimmy Dimitrakopoulos. “It’s a really great opportunity that Aeroplan is offering us to raise money and build community with our colleagues,” he said. Others echoed their sentiments, saying they were proud to be part of an organization that makes community a priority.

Next up for the group? One last step in homeless awareness: sleeping outside in a parking lot. In full disclosure: it was chilly and rainy that evening so I opted for my cozy hotel room (yes, I’m a wimp). But for the 135 who toughed it out, kudos to them. At the morning sendoff, where the cheque for $66,000 was presented to Dans La Rue, people were tired but feeling accomplished.

Accepting the funds on behalf of the charity, Massimo was visibly moved. “You were able to feel the invisibility that people feel on a general basis, ” she said to the group. “And you will never be the same,” adding that seeing pandhandlers will prove a whole different experience for many. The sleepy crowd, in desperate need of a shower, nodded.

I walked over to Joe Roberts who stood beaming. When asked for his response to those who may still remain cynical, Roberts shook his head. “You can’t transfer the feeling of homelessness but you can bring people closer to it,” he said. “Sleeping on cold, hard pavement in the rain was an immersion experience that allowed them to see issues more empathetically.” In the end, Aeroplan has shown bias for action, he added emphatically. “They set the bar higher for other Canadian companies.”