Ben & Jerry’s founder gives us the scoop at Venture4Change Summit

Social entrepreneurs of all kinds

This made me nervous. Our chat was just ahead of the Venture4Change summit that we at Capacity Waterloo Region were producing. The whole point of the day was to bring nonprofit and for-profit social entrepreneurs together under one roof to talk about how people with powerful ideas were changing the way business was done. I started second guessing. Would it end up being a debate about right and wrong? I had brief flashes of heated arguments with the “good” nonprofit folks lined up on one side of the room and the “bad” for-profits on the other. 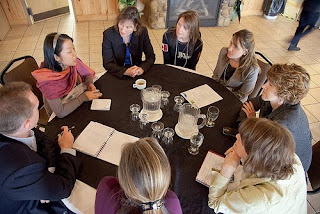 Luckily, the day worked. People interested in real social change proved that they care less about terminology than they do about action. Nonprofits, for-profits, and funders found common ground. They listened, shared ideas, started conversations, and sometimes agreed to disagree. Of course, silos weren’t torn down, but little pieces of them were chipped away. Jerry Greenfield, co-founder of Ben & Jerry’s and Venture4Change’s keynote speaker, told me that he had never been to an event before with such a mixed cast of characters and passionate attendees. He was joined by two other speakers, Tony Pigott, CEO of JWT Canada and co-founder of Brandaid Project, and Sam Purdy, National Director of Habitat for Humanity’s Restores.

Tony’s message to “be different and be better” was a reminder that while socially-conscious consumers are wielding more market power than ever before, the market is very crowded and only ventures that distinguish themselves will be successful. Sam’s story of Habitat’s Restore business touched on the branding and regulatory challenges of a national venture that’s completely run by 73 affiliates – all separate charities with their own boards. Restore, a “retail business that turns donations into cash,” sells donated used building materials that provide an ongoing source of funds to fulfill Habitat’s mission.

Venture4Change wrapped with Jerry, who founded Ben & Jerry’s with Ben Cohen in 1978 after unsuccessful attempts on the career track. Friends since seventh grade, Jerry says they thought, “why don’t we get together, do something fun, be our own bosses, and since we always liked to eat quite a bit, we thought we would do something with food.”

Ben & Jerry’s didn’t set out to change the world. These hippy kids just wanted to have a good time. They knew absolutely nothing about the ice cream business, but a five dollar correspondence course taught them enough to set up shop. But a funny thing happened on the way to the ice cream parlour. Ben and Jerry woke up one day and realized they were becoming businessmen. “It wasn’t exactly our idea of a good time,” Jerry said. “Business had all these negative connotations and we felt like our business was just becoming another cog in the economic machine and we didn’t want any part of that.”

They were about to abandon ship when they received life changing advice: if you don’t like the way you’re doing business, change the rules. Decades later, Ben & Jerry’s is almost as well known for its social initiatives as it is for its decadent Cherry Garcia and Chunky Monkey.

Today, Jerry believes business is the most powerful force for change that we have. He’s convinced that the double bottom line is what has made Ben & Jerry’s a success – that operating from your values reaps rewards. Their approach has helped blaze a trail for a new, perhaps more intentional generation of social ventures.