Broadening Horizons: On the ground in Bangladesh with Brighter Dawns 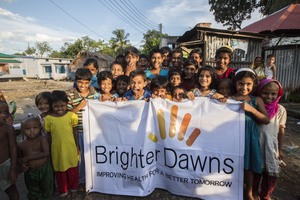 Some 8,000 miles away from the United States is a warm and colorful community known as Ward 12. One of the most densely populated slums in Khalishpur, Khulna, Bangladesh, in Ward 12 access to safe sanitation and clean drinking water is severely limited –  and a non-profit group based out of Illinois named Brighter Dawns is trying to help. Founded by Tasmiha Khan, Brighter Dawns initiates well and latrine projects and spreads health education through seminars.

While becoming acquainted with the challenges, hopes and frustrations of residents in Ward 12, Brighter Dawns’ team has fostered strong relationships with residents and has witnessed progress transform as Ward 12’s health situation improves. Imagining Ward 12 from afar is a difficult exercise, but thanks to a couple of Brighter Dawns team members, we now have a better idea of what it’s really like on the ground in Bangladesh. Benjamin Jimenez and Kimberly Muellers are among the past attendees of Brighter Dawns’ trips to Bangladesh, both of whom found their trips to Ward 12 to be moving experiences.

Brighter Dawns resident photographer, Benjamin Jimenez has been on the ground in Bangladesh twice.  Jimenez, who had never traveled for non-profit work before his foray with Brighter Dawns, found the trip to be, “constantly moving from day one.” Upon arriving in Bangladesh, his first impression was of the severe contrast in income that is often displayed side-by-side in Bangladesh, where water and poor sanitation are widespread issues and not limited to a particular area of the country.

Over 70% of the population lives in a slum, many adjacent to affluent communities. “When we first arrived in Dhaka [the capital of Bangladesh], we had some time to explore the streets,” recalls Jimenez. “Even though Dhaka was extremely city-like, you saw slum communities around you…some even worse than the ones we did work with.”

Jimenez’s photography illuminates what life is truly like in Ward 12. His photos capture the community in action, with a focus on particular residents. As a result, he has become a familiar face in the community, and has found that revisiting the area has encouraged community engagement with Brighter Dawns’ work and fueled local residents’ interest in the organization. Jimenez was invited to meals at family homes and large tea sessions, due to what he presumes is the community’s acknowledgement that Brighter Dawns is serious about their projects. “Since I came back the second time, I found the large majority of the community were even more hospitable to me,” shares Jimenez. “I was invited to the office of the commissioner of Ward 12, we drank tea and talked about our game plan and this time around, it was ‘what do you guys need I am here to help you now.’”

Like Benjamin, Kimberly Muellers was also struck by the situation in Bangladesh and found forming relationships with the members of Ward 12 to be rewarding. Muellers’ trip to Bangladesh was her second time outside of America. Welcomed by the intense heat of the country after 24 hours of traveling, she felt she was, “in another world.” One of the first Americans to attend the trip, though she felt her perspective was filtered due to standing out as a foreigner, Muellers found the trip to be, “mind-blowing.”

Both Muellers and Jimenez noted that the slums in Bangladesh are not isolated from the urban center, but present throughout the city. As Muellers noted, “There are parts of Daaka that are very urban and advanced and then you turn a corner and literally one building over is a slum. It’s like that all over.”

Muellers worked with videography and attended health seminars and events, including an event held for children at one of the local schools in Ward 12. Even though she was staying in a more urban area than Ward 12, Muellers was struck by how much influence water had on her daily routine. Water affects everyone in Bangladesh. Wealthier families can boil their water or purchase it by the bottle, but drinking from the tap is a luxury unknown.

The poorer communities often find clean water at a far distance, while the wells in their own neighborhood are broken and in serious need of repair. Reflecting on her trip for a Brighter Dawns’ newsletter, Muellers stated, “My trip also introduced me to a completely different way of experiencing water in everyday life. Throughout our travels, there was a constant buying, sharing and conserving of one-liter filtered water bottles. My life became an endless effort to balance staying hydrated in the oppressive heat and saving enough water to drink with my next meal.” Overall, Muellers commented that the experience of being on the ground was “hard, but it is really interesting…it was a good experience for me to see how millions of other people live.”

Focusing on a small corner of the world, Brighter Dawns has built trust with the community of Ward 12 thanks to their hard work. Ward 12 is already seeing improvements, but there is much to be done. The community is one of many slums that need clean water and proper sanitation to save lives from illness in Bangladesh.

Learn more about Brighter Dawns and how you can help at: brighterdawns.org.

Michelle Hardin is a Louisiana native, literature enthusiast and freelance writer. She attended Rhodes College for her B.A. in English and King’s College London for her M.A. in English. She has served as the writer-in-residence for Brighter Dawns a little over a year and enjoys volunteering for the organization. She hopes to be a professor of English literature one day and plans to continue writing forever.