Building Resilience Against Natural Disasters: Build Change takes technology to the next level 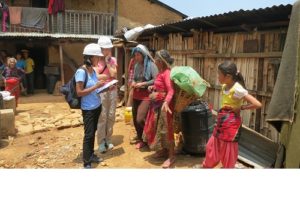 Rebuilding communities in emerging nations after a devastating earthquake or natural disaster is about more than just repairing damage. For Build Change, a global nonprofit social enterprise, it is an opportunity to build a foundation for safer, more prosperous communities by using resilient materials and techniques and providing practical training to local builders, homeowners and engineers who can pass these practices and skills along for generations to come.

While many rebuilding efforts are based on routine, one-size-fits-all procedures that will not lead to sustainable improvements in infrastructure, Build Change is combining its extraordinary vision and the power of breakthrough technology to take international disaster relief to the next level.

There are plenty of advanced materials and cutting-edge technologies that are used today to create disaster-resistant buildings. However, many emerging nations do not have access to the resources necessary for building sustainable structures that often rely on advanced techniques to meet the needs of growing populations in these communities.

Instead of introducing completely new technologies or reintroducing methods that have gone out of style, Build Change engineers focus on small, low-cost improvements to existing, culturally preferred ways of building through tactics like developing strengthening techniques for mud and stone homes, retrofitting (or repairing and strengthening damaged or unsafe buildings) to meet disaster-resistant engineering standards, or providing the people in developing countries with the right technical training to support the safety and sustainability of their own communities for years to come.

One of the places Build Change is making a significant impact is in Nepal to repair damage from a major earthquake in 2015. Build Change started its work in Nepal just 10 days after the disaster. And now, it is taking its work to the next level with its new drone initiative. The organization is using drones to generate high-resolution images for close-range inspections of earthquake damage. Using drones reduces the risk for emergency responders in dangerous areas and captures a unique viewing angle that may not be possible to achieve from a manned aircraft. Furthermore, drones are an easily deployable technology that can be launched within minutes of a disaster, and their use proves to be a cost-efficient method of monitoring. Build Change is first focusing its drone initiative in the Lower Bhimtar village that includes 186 households, 138 of which were destroyed in the 2015 earthquake.

But Nepal isn’t the only country Build Change has set its sights on. The nonprofit’s most recent endeavor takes it to Colombia. Colombia has experienced sustained economic growth and improved political stability over the past 15 years. However, in spite of that growth, more than 10 million Colombians live in houses that are weak and likely to collapse during an earthquake. To combat both the economic and environmental instability affecting the country, Build Change is focusing on retrofitting to create more resilient homes.

On August 3, 2016, Build Change broke ground on its first retrofit for a Bogotá resident, Maria Amalia Suarez, who has three generations- a total of seven people – living in her single-story, three-room home. She lives in a part of Bogotá that used to be controlled by one of the guerrilla factions, and she was extorted multiple times to “pay rent” on the land that she already owned. This prolonged extortion even made it so Maria was not able live in a secure home. In fact, when the team went over the proposed retrofit, Maria revealed the rear of her house, where her kitchen and bathroom were, had no exterior wall to separate her from her neighbors.

Maria’s story is just one of tens of thousands of similar stories. This is Build Change’s first permitted retrofit in Bogotá, and the nonprofit is aiming to acquire 11 more permits for retrofits by the end of 2016. This is a big step in the community, and Build Change hopes these additional permits will demonstrate to local builders and government officials the importance of retrofitting on a broader scale.

We are proud to work with the homeowners, builders, governments, and our other partners around the world who are committed to a safer, more resilient future for their communities, said Kyla Gallagher, Marketing and Development Associate for Build Change.

Founded in 2004, Build Change has improved more than 245,000 lives with its rebuilding efforts – with the goal of reaching 10 million people by 2024. An impact of this magnitude requires power and cutting-edge technology that Build Change finds using Autodesk design software and Lenovo ThinkStations and ThinkPads to create concept models, perform structural analysis, render full-fledged visualizations and more.

Lenovo partnered with Build Change this year through its ThinkRevolution program, which allowed the nonprofit to not only tell its success stories to a broader audience, but also access the right technology to create groundbreaking designs that would hold in any condition.

To learn more about how Build Change is supporting other nations and communities in need, visit www.thinkworkstations.com/tr-story/buildchange.

Kyla Gallager is the marketing and development associate for Build Change