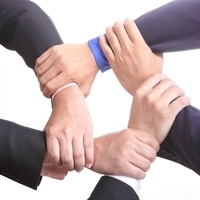 Listen. Hard. Because multi-collaboration projects require an appreciation for the language and systems of stakeholders. According to Terry Rock, past president and founder of Calgary Arts Development (CADA) some of us are rooted enough in curiosity to initiate important cross-sector conversations.

“You have to be willing to push the boundaries of structure to address opportunities,” says Rock.

Excellent. And boundary pushing generally isn’t the issue, is it? Social entrepreneurship means we’ve aligned values with opportunities, passion is inherent, making conversations or perceived boundaries the least of our concerns.

Perhaps collaboration isn’t as easy as it sounds. This is not just playing nicely with the other children in the sandbox. You have research to do (yawn, says the fiery passion). People to meet, lots of them. I’s to dot and t’s to cross. Come now, you don’t want to be a pig in a poke.

“Business, government, arts, each have their own flow of information. Brokering between those and understanding each of them can help with identification of opportunities and assembling resources,” says Rock. That’s how it goes. This thing leads to that thing, leads to a broad based skill set and knowledge base.

That’s how things went for Rock. He ended up CEO of the arts authority after a gleaned insight from his 2002 contract to reform Calgary’s dated Civic Arts policy (circa 1996). The former strategy professor knew an umbrella organization streamlining investment, connecting like-minds and promoting the vibrant arts scene had legs. So he began dotting i’s.

“A mentor in the cultural sector advised me, whatever you do, don’t create an organization with one person, you won’t be influential,” says Rock. Are you listening? That advice was clearly for you. Pig. Poke. Not you. “I also knew we needed to operate in all spheres to be viable. We couldn’t be optional and fight for airtime on the council’s agenda. As a wholly owned corporation of the city, the council was a shareholder, and we’d be guaranteed a conversation,” says our savvy friend. 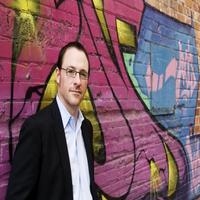 Today, this for-profit corporation owned by the City represents the taxpayer’s interests in arts spending. And Calgarians do love their arts and culture. According to a 2009 white paper published by CADA, “arts attendance eclipses that of other Calgary attractions, including heritage and sporting events”.

Hold the phone. Now that was another smart move. Tying spending to something you can prove the taxpayer cares about. Brilliant. Dr. Rock adds, “In start-up mode you are judged by actions and results. Have some quick wins, a reputation for good judgment, and tell the stories about the impact your making.”

And don’t forget to hook up with some passionate generalists. Rock built CADA with the help of a few, favoring them over specialists for the project. He likes the dynamic capabilities approach, which, according to Rock, is the ability to reconfigure the organization as required by the environment. Darwin said something about us passionate generalists. You know, the flattering part, about being adaptive. We are you know. We just keep getting back up. Kind of like zombies.

So, good luck out there. Keep an open mind. Share knowledge and continue to seek it with that fiery passion of yours. We really like where you’re going with all this business of doing good.

Elisha Kittson has questions, lots of them. She finds answers through her writing and work as a communications consultant. She lives in the recreationally abundant Okanagan Valley of British Columbia with her family.