If You Can’t Pivot, You Must Persevere 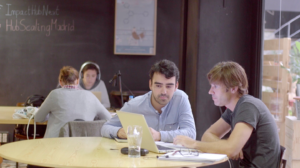 “Do you know what is the biggest difference between social entrepreneurs and classic ones?” This intriguing question was coming from an Ashoka Fellow from Spain, Jordi Martí Gascón. Mart has created a technology to make early diagnosis and prevention of medical conditions accessible and affordable. Surprised, Pablo Santaeufemia asked for the answer. As the CEO of Bridge for Billions, an online incubation program for entrepreneurs worldwide,Santaeufemia was working with many social entrepreneurs and was eager to learn about that key difference.

Wait, what is a pivot?

For those unfamiliar with the term, pivoting is used to describe when a company radically changes their product or target market in order to attract more customers. For classic entrepreneurs, pivoting allows them to seize a market opportunity, and increase their financial revenue. For them it’s a numbers game in an attempt to maximize their profits. Did you know, for instance, that YouTube started as a video online dating service? When Jawed Karim identified that the model was not gaining any traction and turning unprofitable, he uploaded random videos on the site, such as of Boeing 747s taking off. Users started sharing all kinds of videos – and so began the rise of a tech star.

While this kind of pivoting is something that regular entrepreneurs can easily do, a social entrepreneur cannot. Why not? Social entrepreneurs by nature have identified a problem affecting society and are attempting to solve this specific social or environmental issue, or to help a specific target population. While social entrepreneurs can find different means to pursue that mission, the end is very specific and always remains unchanged. They may change their strategy, but their mission and vision – the end goal of their enterprise – cannot be modified.

As demonstrated by the YouTube story (and many more – Groupon, Instagram and Flickr are some other examples of companies that started off with a radically different product and target population than what you know of them now), the goal of making money is achievable through an infinite number of paths, but a precise social goal like empowering underprivileged students to succeed in STEM can only be achieved through limited paths such as mentorship, workshops, or tutoring.

If you can’t pivot you must persevere

This lack of pivoting options requires a higher level of resilience from a social entrepreneur. Typical entrepreneurs can decide to radically pivot as long as it allows them to continue growing their revenue, while social entrepreneurs must persevere. In the face of adversity, they need to deal with how to surpass the obstacle they are facing, for example by refining their product or strategy, but never fully pivoting or altering their mission.

Bridge for Billions, an online incubator for early-stage entrepreneurs that started operating in April 2016 has witnessed that, without fully pivoting, social entrepreneurs CAN change their product and strategy to reach the same goal. Bridge for Billions – which already boasts 106 entrepreneurs, 146 mentors and the creation of 63 new jobs- is based in Spain and the US, but the online platform is accessible from anywhere and has been translated into English, Spanish and French. One of their entrepreneurs from the UK, for instance, wanted to provide employment to refugees and asylum seekers in Europe following the recent migration crisis. After considering a catering and food delivery service run by refugees, she identified the huge competitive barriers that existed to enter this market, specifically food-delivery giants like Deliveroo or Just Eat.

The team decided to launch a coffee shop run by the same target population, which still perfectly aligned with their social mission: give employment to those that need it the most.

When impact and profits actually align

The link between the social mission and the business of social enterprises means they enjoy a stronger “succeed or fail” framework. They have less grey areas between those two factors than classic entrepreneurs, and this is especially true for nonprofits. This is why hybrid business models that inextricably link the mission of the business with its revenue streams are especially interesting. By definition, the more good they do the better they will perform financially speaking.

For these social entrepreneurs, the ability to create a meaningful impact is equally as important as generating profit. This focus on the social or environmental impact of the business means that social entrepreneurs must be resilient in the face of adversity, and creativity when considering solutions to these problems. While they may follow a difficult path, for them these struggles are worth the end result of making a difference in these seemingly insurmountable issues.

Paula Abarca is a Content Writer at Bridge for Billions, an online incubator for early-stage entrepreneurs around the world. Paula is passionate about social entrepreneurship and languages; and is currently pursuing an undergraduate degree in Comparative Literature and History at Brown University.