The CAPE (Capital for Aboriginal Prosperity and Entrepreneurship) Fund may have launched in 2009 but its seeds were planted years ago. A $50 million private-sector investment fund initiated by the right Honourable Paul Martin and his son David, one could say its mission began during the former Prime Minister’s adolescence. It was then, Mr. Martin recalls, that he first encountered the inequalities that existed between Aboriginal and non-Aboriginal Canadians.

Over time, an interminable quest for justice – a desire to right the wrongs – would inspire Mr. Martin’s work, both in government and beyond. Take the Kelowna Accord, a $5-billion deal signed in 2005 by the Canadian government and provincial, territorial and national Aboriginal leaders that was designed to improve the education, employment and living conditions of Aboriginal peoples. Or the Martin Aboriginal Education Initiative, aimed at reducing Aboriginal dropout rates and increasing post-secondary attendance.

A history marred by restrictive laws and controversial government policies has had far-reaching impact on Canada’s Aboriginal peoples, from high suicide, incarceration and dropout rates, to various societal challenges and a marginalized role in the economic growth of Canada. CAPE Fund was born to promote economic independence and entrepreneurship among Aboriginal peoples, believing mentorship, hope and a self-sufficient middle class to be inestimable antidotes to poverty and despair.

Capitalized by 21 investors, the fund provides equity and quasi equity investments in the range of $1 million to $7.5 million (most are 3 to 5), with social and financial returns at its core. Partnering with Aboriginal individuals and groups, the fund supports increasing Aboriginal ownership and control of business, and promotes greater Aboriginal involvement in the management of the business itself over time, explains managing director Peter Forton. “That’s as important to us as the financial returns.”

Building viable, sustainable businesses is important too. “This isn’t just a charity project,” Forton says. Selected companies have to be capable of generating profitability and return for CAPE and its Aboriginal partners. A tall order but one that One Earth Farms, CAPE’s first investment completed in December 2009, can accomplish. Working in conjunction with First Nations’ partners in Alberta, Saskatchewan and Manitoba, One Earth Farms intends to become the largest, most efficient operating farm in Canada and eventually the world, says Forton. Several other investments are in the pipeline and CAPE aims to close three or four more this year. Ultimately, Forton hopes the market will witness CAPE’s potential, convincing the private sector to continue their support for these important initiatives.

In light of the recent launch of CAPE Fund, SEE Change spoke with the Rt. Honourable Paul Martin about the initiative, his views on social entrepreneurship and its potential to change lives. 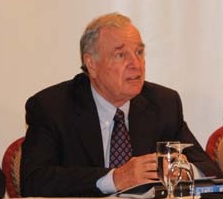 What inspired the creation of CAPE Fund?

What are the greatest challenges facing Canada’s Aboriginal peoples today?

What obstacles prevent a vibrant social entrepreneurial landscape in Canada?

PM: There’s no reluctance on behalf of the business community to provide mentorship or to invest if the purpose of that investment is to provide Aboriginal Canadians with the opportunity to build a business and have a better life. The problem that exists – the fundamental problem of social enterprise in Canada – is people are so used to viewing the world in terms of either charity or investment and never the twain shall meet. And so they [investors] essentially ask, “Is this a charity, in which case there should be a charitable deduction, or is this an investment, in which case there should be a market return.” The problem is to overcome that.

How do you foresee overcoming that challenge?

PM: It requires, in my opinion, a government imprimatur. The fact that the CAPE Fund has succeeded means it can be overcome. But if it’s going to be overcome on a broad basis, in order to respond to the huge needs that are out there – especially at a time when both governments and the private sector have just come through a major recession – you require a tax incentive to lift that financial return, similar to the kind of tax incentive that’s provided through flow-through shares for the mining industry.

The social entrepreneur should be given the same tax incentives that so many other entrepreneurs are provided. The reason for that is, for someone to make an investment, they’ll require that tax incentive, and also because we’re used to this constant rigid breakdown between charity and investment. So the imprimatur from the legislature, that this is a valid form of providing a social good, is required.

So are tax incentives the greatest obstacle? Do you foresee this changing soon?

PM: Yes, it is. I think that some of the provinces are interested and that’s positive, but I’ve not seen any indication that they’re prepared to move on this quickly.

Actually, to be quite honest, I think a magazine like yours will be a tremendous benefit. I think right now the problem is that social entrepreneurship is restricted to a smaller group. What we have to do is widen the audience. When you tell people that the nonpprofit and charitable sectors are employing more people than the entire natural resource industry in Canada, people are amazed. There’s a huge audience out there and a huge receptivity out there, but it has to be mobilized.

There’s much disagreement over the definition of social entrepreneurship, do you see that as problematic? How do you define it?

PM: Yes I do, to the extent that so many other countries – the U.K., the U.S. – are far ahead of us. If social entrepreneurship is going to catch up in Canada, I think its message has got to be pretty straightforward. And that means, obviously, arguments over definition do hurt. My definition would encompass all the others. It is, simply: a social entrepreneur is someone who’s first goal is to provide a social return but that, as a means of achieving it, will also provide a financial return that will be lesser. It doesn’t have to be less than market return, but if the first goal is primarily a social return then obviously a substantial portion of that return is going to be taken up by that.

What can we learn from Sir Ronald Cohen?

PM: Sir Ronald Cohen, a very successful business person, was asked by Gordon Brown to essentially go out, simplify the message and develop a way to make social entrepreneurship succeed. You’ve got tons of champions in Canada. There are all kinds of people who, if asked by the provincial or federal government to go out and basically tell us what has to be done to give the social entrepreneur the same opportunity as the business entrepreneur, would do it. I think the provincial or federal government should nominate someone with the same kind of background of Sir Ronald Cohen, someone with a business background who understands entrepreneurship.

Why are you such a strong advocate for social entrepreneurship?