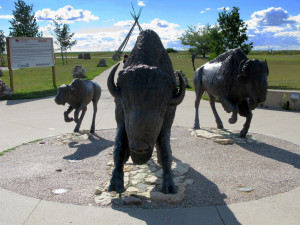 We arrived in the pouring rain on a cool and breezy July afternoon. But it didn’t take long for Wanuskewin Heritage Park to envelop us in its warm embrace. A 20 minute-drive from the downtown core of Saskatoon, Saskatchewan, Wanuskewin —situated above Opimihaw Creek and the South Saskatchewan River— offers a unique and compelling look at Canada’s past, one we don’t often learn about in everyday history class.

With a mission of celebrating and advancing the understanding of the Northern Plains Indigenous people, the 4000-acre Wanuskewin Heritage Park offers a rich educational platform – including state-of-the-art exhibits and an art gallery—to help meet its goals. For over 6000 years, nomadic tribes roamed the lands to hunt, gather and engage in ceremonies and spiritual practice. That it has historically played such a formidable role as a peaceful gathering place for celebration and giving thanks helps explain why in the late 1980s Wanuskewin was given its name – meaning “seeking peace of mind” or “living in harmony”.

Named a National Historic Site in 1996, the area around Wanuskewin encompasses some of the more profound archaeological finds in North America, many of which pre-date the Egyptian pyramids. In fact, the archaeological dig site began its excavations 30 years ago which, according to marketing manager Andrew McDonald, makes it Canada’s longest-running archaeological dig.

That was when renowned archaeologist Dr. Ernie Walker—who also happens to be an original and founding Wanuskewin board member – and fellow researchers began unearthing one-of-a-kind finds. Take the 2000-year-old wolf jaw bone and an elk tooth that was once used as a personal effect – unique treasures to be sure. In the summer, visitors can actually find some of Dr. Walker’s University of Saskatchewan’s archaeology students hard at work at one of the many dig sites, says McDonald as we enjoy a traditional Indigenous meal at the site’s popular restaurant. With everything made in-house and sourced as locally as possible, the café offers an array of authentic cuisine with a contemporary twist. And it’s delicious.

Wanuskewin is not a federal, provincial, or municipal-owned park. Rather, it’s an independent nonprofit entity governed by a board. Its social entrepreneurial initiatives include conference facilities, corporate retreats, special events and weddings, whose revenues help maintain the sustainability of the nonprofit. A Council, meanwhile, made up of Elders who represent the various Indigenous communities who gathered in the Wanuskewin area, ensure that the Park continues to stay true to their oral traditions and cultural heritage.

Almost immediately upon arriving at the Park, we were greeted by a Wanuskewin staple: a dance performance by Julian Kakuma, a traditional dancer for 15 years whose dancing was as magnetic as the traditional stories he told through movement. (of note: on a recent Amazing Race Canada episode, teams were brought to Wanuskewin for a Detour challenge to learn a traditional hoop dance, a difficult task that Kakuma was asked to judge for accuracy). 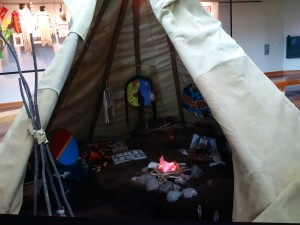 There is much to do at Wanuskewin. Visitors can hike 6kms of trails and explore 19 individual sites that represent the life and activity of those who once inhabited the area, such as bison kill sites and tipi rings. And talking about tipis, Wanuskewin’s wide range of programming includes something I wish I could have experienced: tipi sleepovers. Known as “Pe kapaysik Miykowapi” – translated as “Come and Spend the Night”—the sleepovers leverage both the cultural heritage of this place as well as its strong focus on storytelling. Visitors not only get to spend the night in a tipi, they also enjoy listening to traditional stories around the fire while munching on Bannock and Muskeg Tea.

Other programs at Wanuskewin include the Medicine Walk – a trail walk that educates visitors on traditional First Nations medicine found in the adjoining Opimihaw valley. Every summer Wanuskewin also hosts a free powwow—traditional and competitive ones— which typically brings in around 2000 participants.

On my way out, I stop at the Great Hall—which uses artifacts as well as oral and written traditions to demonstrate the life of Northern Plains People—and make my way to the room’s central display: a life-size tipi fashioned authentically. This is where visitors (especially students) learn about the history of this iconic home, how it was made, transported and its significance.

Kakuma stands by, ready to answer any questions and to demonstrate the tipi’s intricate design. I ask him about his role as one of Wanuskewin’s most popular and dedicated supporters and what the place means to him. “It’s a non-partisan place to witness and take part in all aspects of First Nations and Metis culture – music, cuisine, arts etc,” he says. “You can experience all of these parts of culture in one day,” he enthuses. “I’m proud to be a part of it.”