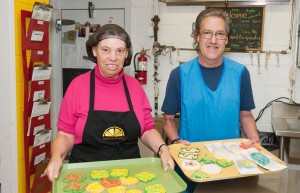 Over the past century, society’s approach to individuals with developmental disabilities has been a problematic one. It was not uncommon for those labelled in this way to be ostracized by their community. Viewing them as threatening and often misunderstood, society relegated these individuals to the periphery, restricting in the process their human, social and economic rights.

Not surprisingly, studies show that those with developmental disabilities in Canada experience higher rates of unemployment and low income support, which inevitably fosters poverty, isolation and social exclusion. It’s an especially unfortunate reality considering that, so long as people with developmental disabilities continue to be excluded from the labour market, the stigma and stereotypes over their employability will persist.

That stigma has a long history, perpetuated by a view of persons with developmental disabilities within the context of a ‘deficit model’, one that focuses on the disability and encourages adaptation to a ‘normal’ standard. From that model evolved the proliferation of sheltered workshops and institutional jobs – undeniably a step forward from total exclusion from the labour market, but still a long way from effectively reducing the barriers to inclusion.

Fortunately, due to advocacy efforts and the growing significance of human rights legislation, society has started to open its mind, heart—and labour force—to those with disabilities.

Recently, the idea of social inclusion has become more popular, enabling citizens who have developmental disabilities to make a greater contribution to the social and economic life of their communities in ways we would never have thought possible a century ago. Along the way, there’s been a determined move away from segregated placement settings and toward community jobs and regular competitive employment opportunities.

Today, advocates continue to fight for the rights of the developmentally disabled, while social enterprises and other organizations play their part in paving the way for change too. Take Toronto-based Common Ground Co-operative. Leveraging the talent and expertise found in the community, the Co-operative supports the creation and maintenance of business enterprises for people with developmental disabilities. In doing so it offers an innovative model of social entrepreneurship.

The Co-operative, also a nonprofit with a charitable registration, houses five supported social enterprises*, each one structured as a business partnership for persons who have developmental disabilities. They consist of a catering and wholesale bakery business, Lemon & Allspice Cookery; three coffee shop locations known as Coffee Sheds that sell products produced by Lemon & Allspice Cookery; and a toy sanitization business, CleanABLE.

The latter came about in 2010 as part of the Co-op’s plan to diversify its services. Located alongside a Coffee Shed at Toronto’s Surrey Place Centre—an organization that serves persons with developmental disabilities—the partners here work in the evening without job coach support cleaning toys used in the agency’s therapy programs, daycare and waiting room.

It should be noted that Common Ground Co-operative relies upon external supports in order to sustain itself and the business partnerships that it houses. Central to its viability are grants, fundraising initiatives and core funding, about 70%, from the Ministry of Community and Social Services. What’s more, as per the definition of supported social enterprise established for this Series (link to first article), each of the businesses relies on support from the Co-op for its sustainability, including job skills training and business supports.

Case in point: a ten-month Apprenticeship Program—the Foundation Program—was developed by Common Ground Co-operative in 2003, providing job training and apprenticeship opportunities for those wanting to become partners in the businesses, with the final four months spent in a co-op placement at one of them.

Common Ground also employs administrative staff and job coaches who support the businesses, representing approximately 60 business partners and apprentices, all of whom are 18 years of age or older and identified as having a developmental disability. Partners and trainees/apprentices currently number 41 women and 23 men aged 18-60 years from diverse ethnic backgrounds.

Considering the unique organizational and support structure of Common Ground, the question now becomes: what’s the revenue potential for each partner? Each month, partners as a group earn 33% of the revenue from their business before the cost of goods is deducted. Keep in mind that, with the majority of partners being recipients of the Ontario Disability Support Program, the amount they can earn before deductions is limited. Within that limitation, however, partners can receive a maximum annual increase of 15% in their discretionary funds without seeing any deduction to their ODSP.

Annual earnings can vary considerably depending on the business and other considerations but, in 2012, each partner at Coffee Sheds and Lemon & Allspice Cookery made an average of $757. Every business pays a 5% administrative expense fee to Common Ground, while the remaining revenues go toward supporting their operating expenses.

So how successful is the Co-operative in its mission of helping people with disabilities achieve autonomy and empowerment? To answer that question, a host of surveys were undertaken of the partners, their families and business customers. The results were pretty telling.

For one thing, even though it’s only a supplement to ODSP, partners seem to agree that earning business income has offered them a sense of autonomy they hadn’t found otherwise. That they feel this way despite staff sometimes limiting partners’ freedom to ensure proper health and safety standards says a lot about the overall sense of self-determination among partners. A sense of inclusion in the broader community was reported to be high too, with positive feelings of self-esteem related to their job a common result.

The partners described having held numerous community jobs prior to working at the enterprises supported by Common Ground and that they experienced many hardships in retaining these jobs. The Co-op opportunity didn’t present those same challenges, they said. Moreover, the partners reported improved quality of life related to their job, with one stating, “This job is better because it’s our own business.”

As for the Co-op’s economic mission, surveys of customers reported a high degree of loyalty and regard for the quality of services offered by the enterprises, a testament to the Co-op’s dual commitment of furthering partners’ interests while offering a valuable business that can compete in the marketplace. Professional standards were pursued at every turn. In fact, when asked, respondents said the social mandate related to employment of persons with disabilities was seen as an added bonus, not an impediment.

That perspective is an important one and represents another significant role that the Co-op is playing – furthering community awareness of persons with developmental disabilities as valuable, contributing citizens. After all, without breaking down the social barriers and biases, so deeply entrenched in society, the potential for success for these social purpose businesses is limited. So, as society moves forward and broadens its perspective, furthered in large part by advocates and organizations like the Common Ground Co-operative, the future seems infinitely more hopeful. As a staff member of the Co-op stated recently, “People begin to see disabilities differently. Sometimes they are surprised, sometimes shocked; sometimes it’s like a discovery of something new for them. It’s because we are ruining their stereotypes.”

* This term will be used from now on, as it is more descriptive of the kind of organization we are talking about. Social enterprises can be subdivided into those that support a parent nonprofit by generating revenues that enhance the overall service capability of the parent nonprofit (for example, the ReStore of Habitat for Humanity or the Thrift Shops of the Salvation Army) and those that are supported by the parent non-profit. We refer to the latter group as “supported” to differentiate them from the former group.