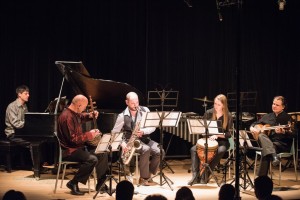 A few months ago, a delighted audience at the Alliance Francaise Theatre in Toronto was treated to a concert unlike any they had heard before. But it wasn’t just the performance that struck a powerful chord. It was the players and their collaborative mission that made us all sit up a little straighter and offer a deliberately appreciative round of applause upon the concert’s last heartfelt note.

The concert was the launch of musical collective, the Israeli-Iranian Musical Initiative  (I=I), the 2013 brainchild of composers from sworn enemy states, Iran and Israel, with the express intent of encouraging an intellectual and cultural dialogue between individuals and communities through artistic creations. And judging by the response, their intention came through loud and clear.

The event included the world premiere performances of original compositions by collective founders, Iranian-composer Parisa Sabet, Israeli Dan Deutsch and Israeli-born US resident Noam Lemish, incorporating Jewish and Persian traditional music, the poetry of renowned Iranian poet Omar Khayyám and Israeli popular songs. The performers were joined by a number of Canadian musicians for an unforgettable evening, one that reminded us of the power of music to transcend divergence, rise above dissent and speak volumes.

SEE Change Publisher & Editor-in-Chief, Elisa Birnbaum attended the evening performance and caught up with two members of the Israeli-Iranian Musical Initiative after the show.

What inspired you to come together and work on this project?

Parisa Sabet: I met Dan Deutsch when I came to the University of Toronto. There was a brief meeting held for new composition graduate students. In that meeting everyone introduced themselves and talked a little bit about themselves and their background. After the meeting, Dan approached me and asked me where I said I was from and I told him, “I am from Iran”. Then I asked him where he was from and he said, “I am from Israel.” And, after a few seconds he said, jokingly “I guess, basically we are enemies” and we both laughed. This was the start of our friendship.

Despite all the diplomatic hostility that has been going on between our countries, we found a lot in common especially in our cultures and we decided to share this experience with others through art and music. Later on we approached Noam Lemish to join us in this journey.

What’s your mission with this group?

Noam Lemish: The project presents the fruitful possibilities of cross-cultural musical collaboration. In doing so, it reaches out to the Jewish, Israeli, and Iranian communities, as well as the general public, promoting a cultural and artistic dialogue between audiences, creators, and performers. 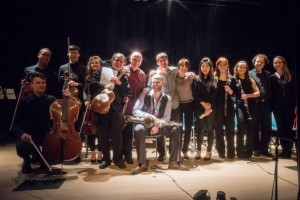 Is this an ongoing project or just a one-time thing?

Parisa Sabet: Yes, this is an ongoing project. I-equal-I’s board met shortly after this first concert and we are already planning our next projects. Lots of good things happened while we were working on this first concert, we met wonderful people and made great connections. A lot of artists and sponsors have already got in touch with us and expressed their interest to work with us on future projects. We are looking forward to these various collaborations.

What were the biggest challenges for the group and were you able to overcome them?

Noam Lemish: Getting an ambitious project of this sort up and running certainly involves some challenges, mainly logistical. It took a great deal of work and dedication to secure the necessary financial support. We were fortunate enough to win a Toronto Arts Council Grant and receive generous support from the Anne Tanenbaum Centre for Jewish Studies at the University of Toronto.

Noam Lemish: We have been delighted with the overwhelmingly positive response we’ve received. We have received such warm support and encouragement from musicians, audience members (Israeli, Iranian and Canadian), media outlets, community partners and various arts and culture organizations. As Parisa mentioned, we have been already approached by several organizations and festivals about future collaborations. We are also ecstatic about selling out our project launch concert and were so heartened by the level of interest the concert garnered.

Parisa Sabet: We are planning to expand our horizons and invite new artists with diverse musical backgrounds to join us in the next project. At this point, what I can tell you is that the next project is going to be more innovative in context and bigger in scale. We are very excited and looking forward to it.