Creating a Brighter Future for Girls in Afghanistan 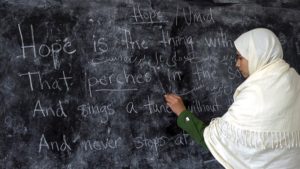 Documentary profiles the first all-girls’ school in an Afghan village and the challenge it poses to conservative social tradition.

In rural Afghanistan, one woman decided it was time for change. Believing in the power of education in re-imagining the future of her beloved country, in 2008 Razia Jan—founder of the Massachusetts-based Razia’s Ray of Hope Foundation—opened a free private, all-girls K-12 school in Deh’Subz district, 30 miles outside of Kabul. The changemaker and all those now enmeshed in her vision – from the principal, to the headmaster (the only man hired because women can’t hold leadership positions) to the teachers, students and village elders tasked with the job of keeping the students safe – are the subject of an eye-opening documentary, What Tomorrow Brings, that screened at the recent Hot Docs Festival in Toronto.

Before the Soviet occupation and Taliban takeover, Afghanistan was a relatively progressive country with a pretty liberal view on womens’ rights. Women were schoolteachers, government workers and 40% of them held positions as doctors. Today, the situation is different. Women and girls in Afghanistan are largely uneducated and often relegated to traditional positions in the home. The literacy rate for females over the age of 15 is 12.6% compared to 43.1% for males, and only 40% of females attend primary school and 6% attend secondary school.

But with the help of Jan and other activists, things are starting to improve. When Jan’s Zabuli Education Centre was first launched, 109 students streamed through its doors. By 2015 it boasted 450, with demand for more classrooms constant. But obstacles confronted Jan every step of the way.

Fundamentalism still resonates in these parts, witnessed in every splintered, impoverished home. Once deemed the Paris of the Middle East, Kabul is a veritable shadow of its former self, say those who lived here before years of war and conflict brought it to its knees.

“Things were different back then,” recalls Jan. “We didn’t have to cover our heads, we rode our bikes…we were free.”

To be sure, there has been a lot of progress since the Taliban were overthrown but, despite an increasing openness to girls’ education, many remain hesitant or downright hostile to the idea of empowering women. Take the 18-year-old daughter of the mayor of the village, Rihala, who registers at the school (placed in grade five due to her lack of education) and shares her wish to become a lawyer – one of the more ambitious goals of any other subjects in the film.

It soon becomes evident that her aspiration will prove a tough stretch. You see, Rihala’s father took a second wife (all of 16-years-old) and now wants his daughter to marry her new “stepmother’s” 70-year-old father. Rihala’s family doesn’t seem to share her love for education or progressive worldview, requesting she also don the burqa: “I will never wear it,” she states defiantly.

With conservative voices still strong and talk of a Taliban resurgence on the lips of many, it is not surprising that in 2015, 213 schools had to shutter its doors, affecting over 50 thousand girls in the country. And, as the documentary recounts, there seems almost daily news reports of girls’ schools being attacked or its water poisoned.

“When we started we had great hope that things would get better,” says Jan. “But within the eight years, things have gotten worse.”

Security is fierce at the school. Iron gates keep girls in and are only reopened at the end of each day. Every student bag is checked at the entrance, classrooms are scrutinized before any girl takes her seat and village elders are on constant watch. An especially powerful scene in the documentary shows the school principal during her morning ritual of drinking a cup of water from the school hose to test its toxicity. “If the water is poisonous, I’m just one person,” she says taking a big gulp.

In many ways her selfless act underlies one of the strongest messages of this film: change will not happen by standing still or being quiet – it will only emerge when the brave take a step forward, and then another.

It’s a lesson Jan hopes to impart on the students themselves. “We can guide them but they have to fight their own battles,” she says after Rihala misses six months of school during her messy familial dispute. In the end, she wins the battle, returning to Zabuli with renewed conviction (interestingly we now see Rihala shrugging off a burqa as she enters the school yard, hanging it over a railing before walking into class. Compromise is a common language of the brave, it seems).

But other students are not so lucky. Pashtana is a troubled young student who survives a self-inflicted poisoning in response to her own upcoming arranged marriage and the prospect of being pulled out of school. At the top of the film she speaks of hope for the future. “All I want to do is graduate”, she says wistfully. But, by the end, Pashtana’s dream comes to a close when she must drop out of school to marry her cousin.

Despite all its challenges, Jan and her team have taken strides most would not have believed possible a decade ago and in December 2015, the Zabuli school saw its first senior class graduate. “I can’t be sure what tomorrow brings but I’m so proud of these girls,” says Jan who gave each an even greater chance at success in 2016 by building a two-year college, the first free private collage for women in rural Afghanistan.

It’s about instilling the girls with the strength and self-belief to reach their potential, with education at its core. Toward that end, the film follows Jan as she joins a classroom to share the story of Pakistani activist Malala Yousafzai. “Nobody has the right to prevent a girl from studying,” she concludes passionately. She then takes a flower in her hand, holds it up for all the girls to see and compares it to an education that blooms and blossoms. “No one can take its beauty from you.”