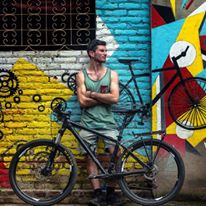 SEE Change is continuously impressed with the brave, impassioned men and women who go out on their own in pursuit of social and environmental change. And we try our best to empower them, the only way we truly can – by helping them tell their story. We asked one such changemaker, 25-year-old Tim Agius, to share his thoughts as he embarks on a project of a lifetime –  a 9-month cycling expedition through the Silk Road – to help raise funds for those who need it most. Here’s his story on how it all began.

Arriving in Nepal this April, I had the luxury of being free of commitments, anywhere in the world. I thought, ‘well let’s see what happens, yeah?’ For some, like me, it’s a magical feeling. However, I knew that I wanted to do community social impact work. After some research and conversations I discovered, not surprisingly, that a large portion of NGO’s in Nepal are quite corrupt, or at least highly inefficient. It was at this point that I made a firm decision to do something independently.

Fate also brought the Momentum Venture project to life. It was only my third day in Nepal when I met Vicky Kumar on the streets of Boudha, where I accepted his offer of fixing a hole in my shoe. A long conversation began. Vicky told me how his family had moved from India 10 years earlier after their father’s death. With three younger siblings never able to get an education, and an ailing mother, Vicky has worked tirelessly to provide for them. Spontaneously, out of sympathy, I purchased a set of tools for Vicky’s work that he had been sharing with a friend and splitting the profits.

This led me to explore the concept of microloans, and the direct impact of empowering locals through the provision of resources or tools to work and become self-sustainable. With the help of microloans, Vicky’s income, whilst still low, has increased by 200% and the family have moved to a fully sheltered apartment with electricity and water, a big step up from the leaking, cold shack they’d called home since the 2015 earthquake.

Vicky mentioned that his 15-year-old sister and many of the other women – mostly Indian refugees – had skills in hand quilt-making. So we took a risk in purchasing materials and they set to work. The results were magical! The women showed an immense amount of passion and creativity. 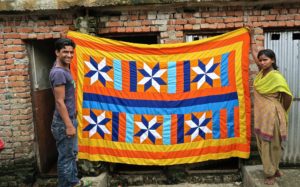 Therefore, this has become the main focus of the project here in Nepal. We have setup an online Etsy store, and been sharing through social media, already obtaining $1500 AUD through 15 international sales, valuable funds which has been shared between the families to help lead themselves to become self-sustainable, whilst gradually paying of the loan for the materials.

Once the loan is entirely paid off, 100% of the income from sales will be going directly to the families. Then an ongoing cycle begins. The repayment of the loan and 10% interest is re-invested into the community to assist in other families.

These families have been living for years, if not their whole lives, in such dreadful conditions where many of them sleep on the floor, children walk around barefoot, and they often have to deal with illnesses without the aid of a doctor or medicine. They live under the poverty line, generally surviving on less than $2 a day, and many of the families were highly affected during the earthquake, losing what they were at least able to call ‘home’.

However despite all of this, they are positive happy people, always willing to boil me a masala milk tea or share some food. The biggest desire of the women is to be able to give their children an education and opportunity at a better future.

Recently, I considered combining this project with a crazy idea I’d had for some time – I decided I’d go on an incredible solo cycling journey, for 9-12 months, through the Silk Road, Central Asia! I will begin here in Nepal, and peddle my way west before crossing to India and spending several months in the Jammu & Kashmir region. Eventually, I plan to ride through West China, Tajikistan and Kyrgyzstan in an adventure of a lifetime!

But, it won’t all be about the bike. We are currently running a KickStarter campaign to raise $5000AUD with which I aim to provide life- changing loans to 10 families in different communities along the way. In collaboration with Amplified Whispers – a creative education & storytelling platform in the heart of the developing world – the journey will be documented to create a web series of the journey, its challenges and results, as well as the local lifestyles and general biking adventure. 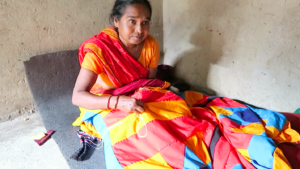 It won’t be easy! I’m facing months of camping & cooking basic, battling undeveloped roads and remote areas, and turtle-like progress cycling up into the Himalayas and Pamir Mountains. Loneliness is also one of the pre-trip fears!

In regards to the project, the biggest challenge is how to monitor and guarantee the loans are being re-paid and re-invested once I have continued on. We aim to combat this by working with educated students or social workers in each region who see it as an opportunity to learn and support their countrymen and women!

I still can’t believe I’m actually doing this. I believe it will be an incredible journey of human connections, hospitality, struggles and understanding. I have a greater sense of purpose than ever before and am itching to get out on this trip that not only can I live freely and see beautiful landscapes, but I can genuinely make a social impact on a direct level.

To take a look at the quilts currently available, go to: www.etsy.com/au/shop/MomentumVenture

Tim Agius, 25, from Melbourne, will this August embark on a solo 9-month cycling expedition through the Silk Road, Central Asia, empowering a number of undeveloped communities by providing resources through the form of micro loans. Throughout this venture, Tim will be documenting & creating a web series of the trip, processes & final impact, in collaboration with Amplified Whispers – a creative education & storytelling platform in the heart of the developing world.

To follow Tim’s cycling journey and the overall project – www.facebook.com/momentumventure