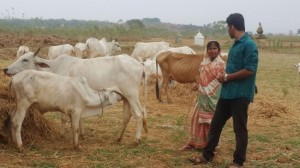 “Vat Vrikshya” in Sanskrit means Banyan Tree. The national tree of India, it’s considered holy, representing a shelter to smaller creatures. To social entrepreneur Vikash Das, it represents inclusive growth, a goal he is working towards in the eastern Indian state of Odisha.

Das founded Vat Vrikshya after being disillusioned by a life many others would aspire to lead: after completing a prestigious Masters in Software Engineering, he was leading a successful career at IBM. Despite the resistance from his close social circles, a dissatisfied Das decided to quit his job, return to his roots in Odisha pursue the path of building a better India, starting with helping the indigenous tribes, the Adivasi, that had he had grown up alongside.

“They are geographically isolated, living in mountains and hills, but even if they wanted to become part of society, they are considered outsiders,” describes Das. “They are used to being exploited and excluded.”

To really understand their needs and gain their trust, Das took an even bigger leap. He moved in with the locals, two to three months in each village, and communicated extensively with the village elders.

And that’s when he launched the social enterprise, Vat Vrikshya, with the goal of bringing the marginalized and vulnerable tribal groups together and to empower them, especially the women. “Tribal women do everything. They are the homemakers and also the bread-winner,” explains Das. “They travel miles and miles for drinking water and do the agricultural work as well.” 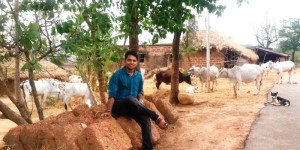 His enterprise works to help by finding them alternate, sustainable livelihoods. Some of the ways Das is making that happen is by establishing market connectivity between the remote villages and larger towns as well as providing financial and economic consulting. Vat Vrikshya also promotes tribal art to mainstream society, emphasizing their innovative design and organic materials, while educating those in the village about importance of savings and financial literacy.

Vat Vrikshya’s microfinance initiative is a holistic, structured program that runs “Maliashan” (Women’s Clubs) every Sunday where they track the women’s progress and nurture the entrepreneurial spirit in the members.

“Charity is for people who have no basic necessities. We provide vocational training to give them lasting education and the confidence to walk the path to a better life themselves,” says Das.

“Social entrepreneurship is considered a sunken boat option,” he adds, describing the level of (dis)interest in the non-profit sector in India.  Despite being a country of great wealth, India is also a place with widespread poverty and a mindset that hasn’t evolved beyond intermittent donations as a way to address issues. Finding more innovative, sustainable, long-term solutions is not the norm.

Nevertheless Das is hopeful for the next decade. “Seventy-five percent of India is rural, which means we can tap the resources of untouched area and involve the people of rural background and foster their potential,” he says. “Young people are now more confident and interested. One needs to be well-settled first in order to be able to participate.”

Tara Lee is a freelance writer based in India, where she works for a grassroots NGO organization specializing in community based public health initiatives. She has written on topics ranging from art, culture, technology and economics while studying journalism at the University of Hong Kong.