While on assignment in Costa Rica recently, I toured a fair trade-certified coffee cooperative. After witnessing the rigorous work that went into producing each aromatic cup of my beloved beverage, I met with workers on the ground, hearing firsthand their assessment of fair trade. The reviews were positive, one man even calling it a blessing for their families and livelihoods, with the help of vigorous hand motions and an interpreter.

But I was still left wondering. Sure, fair trade has made inroads, but is it doing enough? Even if we focus specifically on coffee, is certification meeting the needs of producers, workers and buyers? 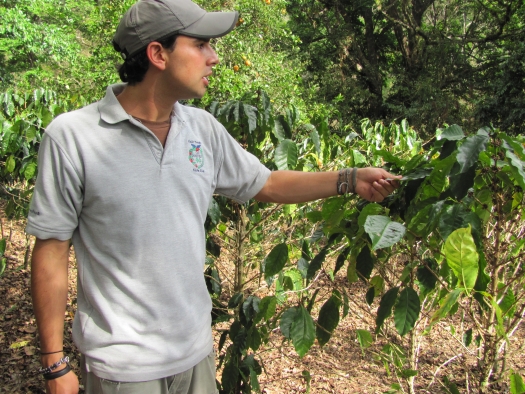 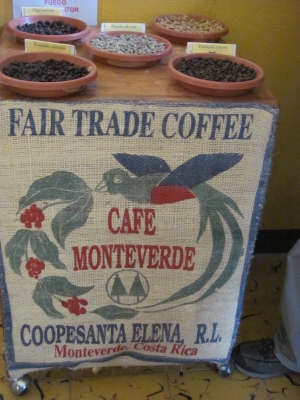 What is fair trade?

Fair trade, the business, the principles, the approach have received a lot of attention lately. It’s no wonder. With environmental sustainability on the lips of many and with producers of so many products – coffee, flowers, bananas, tea, cocoa, cotton, sugar, etc. – working in the developing world, where two billion people live in poverty, the pursuit of ethical business and purchasing practices makes sense.

Over the years, various initiatives were established to answer that call. In 1997, FLO brought many under one umbrella, creating worldwide standards and certification. In 2002, it launched FLO-CERT, an independent body that inspects and certifies producer organizations and audits traders. According to FLO (which became Fairtrade International in 2011), more than 1.2 million producers and workers in 58 developing countries now benefit from global Fairtrade sales, which have been growing at an average of 31 percent per year over the last five years. There are now over 27 000 Fairtrade labelled products sold in more than 115 coun­tries.

Sounds positive, right? Perhaps. In fact, despite the break-up, Fair Trade USA chief impact officer, Mary Jo Cook is quick to assert, “We’re united by a common mission to alleviate poverty through trade and to promote sustainable development.” But, she explains, after trying for several years to innovate within the FLO model, the group felt it had no choice but to leave. Why, you ask? In a nutshell, Fair Trade USA – led by outspoken president and CEO, Paul Rice – believes fair trade can do better.

There are two billion people living on less than two dollars a day and the traditional fair trade model reaches less than 1% of them, explains Cook. The organization’s renewed vision, Fair Trade for All, is focused on inclusivity, investing in cooperatives, and promoting customer engagement, all with the hope of doubling fair trade’s impact by 2015. “Fair trade can be a big part of the solution; it just has to reach more people,” says Cook.

But with fair trade’s historical focus on small farmers organized into cooperatives, the reach is inevitably limited, they say. Basically, if you’re a farm worker on a large farm with banana crops, you can be Fairtrade-approved. But if you’re producing coffee beans, you can’t. Problem is, that represents less than 10% of the agricultural supply, Cook says. “Cooperatives are an amazing form of producer organizations but they’re not the only people who should be part of fair trade.” 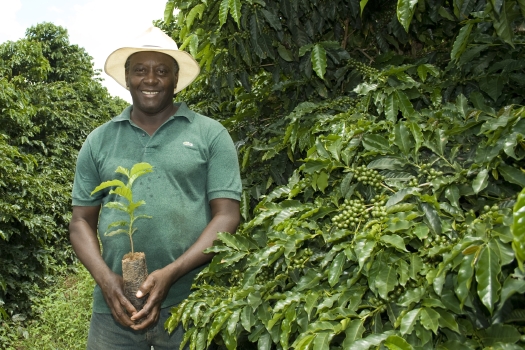 Fair Trade USA wants to use standards universally across all product lines. “Ours is more of an approach of a social entrepreneur,” she adds, “where you have to go and pilot and experiment and try and can’t accept the status quo.” Take their recent pilot project with a 500-acre, 100% organic, family-owned coffee farm in Brazil. Until recently, it wasn’t certified since it didn’t fit into FLO’s strict guidelines. As a result, producers weren’t privy to fair trade premiums and the company that sold their products wasn’t able to use the Fairtrade label (standards state that 100% of beans in a bag must be certified fair trade to be labeled as such).

In January, the pilot became the world’s first Fair Trade Certified coffee estate. By adopting the Fair Trade for All initiative, some of the farm’s 100-plus workers received dental and eye care for the first time, thanks to newly acquired premiums. “We see how this model works in more categories,” concludes Cook. ”It’s an example of how we’re trying to innovate to include more people.”

Wrong way up the right street

The goal is certainly laudable but some disagree on approach. It comes down to a demand constraint, says Michael Zelmer of Fairtrade Canada, the only Canadian member of FLO and the organization currently responsible for filling the gap left by Fair Trade USA. Even if you’re only talking about coffee – 30% of which is sold as fair trade – believing a more expansive definition will bring fair trade to more folks is erroneous. “You’re not meeting the supply you have now, so if you’re thinking about it in gross terms of supply and demand, you’re innovating on the wrong side,” he explains.

Zelmer supports Fair Trade for All’s goal of investing in cooperatives and increasing demand but argues research and experience show the greatest impact occurs through cooperative structures. And, while not every product offers the cooperative option (it’s hard to find small-scale farmer co-ops producing cut flowers), coffee does. “So it makes more sense to be channeling it that way to have the biggest possible impact.”

What’s more, opening up fair trade can potentially worsen the situation for small farmers. “Large scale plantations already have market access, they don’t need things like fair trade,” he says, adding they have enough resources and are already at a competitive advantage. Keep in mind, small scale farmers are the ones historically facing challenges politically and professionally. And FLO has been making great strides in that area, Zelmer says, explaining when co-ops start gaining significant market share and become powerful in regional politics, FLO knows it’s doing something right toward self-led empowerment.

“A system like FLO, one that’s global, has a huge amount of producer input that can have a ripple effect and encourage others to change their business practices and join in fair trade when they wouldn’t otherwise,” says Zelmer. “I don’t know of any system out there that has the level of producer control built into the system.” A recent decision to give producers 50% control over FLO’s general assembly is improving the situation even more still.

Fair trade should be a multi-pronged approach

Adam Pesce of Reunion Island Coffee appreciates the argument but questions FLO’s underlying assumption. “If there’s more fair trade coffee, is it not possible the market will fill the void and more people will buy coffee,” he asks. “If Fair Trade Canada and FLO believe fair trade is the best way to provide support for farmers, shouldn’t they want it to be available to every farmer?” Through his work he’s met many workers on estates facing similar challenges as workers on smallholder farms, he adds. “It just makes sense to be inclusive if the objective is to help.” Besides, Fairtrade has great brand recognition he argues; it’s, by far, the best known certification. “You’d think the more well-known, the more people would want to support it.”

Seems on that point they’ll have to agree to disagree. Though they may find agreement on another. “We’re actually big supporters of the broader fair trade definition,” says Zelmer. “We don’t take the stand that something has to be certified for it to be fair trade; it’s really making sure that good is done.”

Reunion Island was the first Canadian company to join Fair Trade USA after its split, with Pesce attributing his decision to their greater hands-on approach, which he says more closely resembles his own. Still, his conversion doesn’t mean he’s practicing certification monogamy. “We have our hands in every pie as far as sustainability goes,” he says, listing the varied organizations his company is aligned with, including Rainforest Alliance.

They’re also practitioners of direct trade, whereby coffee roasters buy straight from the growers, cutting out traditional middleman buyers and sellers – and organizations that control certifications. No one group singularly accomplishes the goal of fair trade, he asserts, having recently established a direct trade association with the first estate coffee in east Africa certified by fair trade. Sustainable models come in all shapes and sizes, he adds.

President and CEO of BC-based Salt Spring Coffee, Mickey McLeod, would agree. As one of the first companies to be FLO-certified in Canada, he was always a proponent of their principles. “I think fair trade has done a lot for farmers since it was first brought to Canada in 1998,” he offers pensively. “The original concept works well.” But after a lengthy trial with the organization and, after spending much time listening to the needs of coffee farmers, McLeod decided to let his license go.

A big part of the problem was bureaucracy, he says, adding his license fees and the farmer’s certification costs were substantial too. Besides, “there’s really not enough money in the supply chain the way it’s set up,” McLeod adds. “It’s better than it was but it can be something better.” After various attempts to effect change in the system, McLeod went his own way. “I got tired of waiting so we’re doing it all on our own now.”

Thus began Salt Spring Coffee’s own model of direct trade, called Fair to Farmer. They import coffee directly, engage with producers one-on-one, take care of logistics, all the while ensuring complete transparency with payment, expenses, revenue – you name it. Wanting to do even more, Salt Spring recently introduced a sustainable price model. The innovative price averaging initiative is currently in an experimental phase in two communities in Nicaragua and one in Peru. Typically, farmers and buyers fix a price based on the market, with producers invariably electing a day when prices are up and buyers preferring to wait for them to go down. Agreeing on an average price levels things out, making the transaction friendlier and more equitable. Not being constantly at the behest of the market’s ebb and flow also allows for more long-term planning. 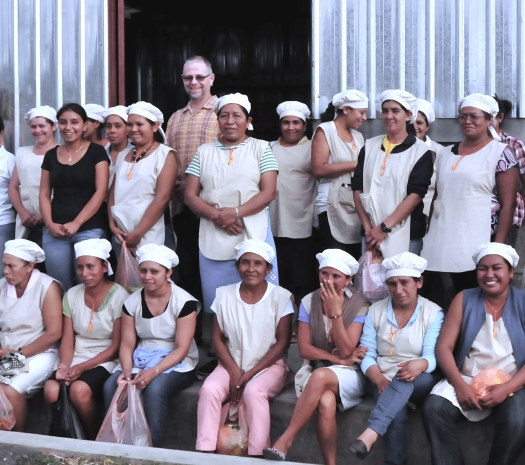 “A lot of this is about engaging with communities more,” says McLeod, explaining it takes a long time to see results but the increased level of openness and trust is heartening. The confidence is reinforced by Salt Spring’s endorsement by the Institute for Marketecology (IMO), which conducts rigorous audits as part of its Fair for Life certification. IMO requires buyers to purchase from FLO certified cooperatives – representing 98% of Salt Spring’s purchases anyway. For the other 2%, Mickey’s in discussion with IMO to relax the rules, considering two individual farmers in question are engaged in farming and social practices that probably supersede those of FLO-certified co-ops, he says.

Sure, more work is needed but McLeod is hopeful. “In the next few years I’d like to say we changed the model and it’s working, that we’ve taken out the bumps in the road and created a model for others.” As for Pesce, he’s hopeful about new models too, but remains cautious about limiting the approach to one. “Don’t forget fair trade is a component of sustainability, it’s not the entire story.”