The punts are lined up in a row, hugging the shoreline behind Pete Decker’s home, the sun’s last glint marking its descent upon their bows and tracing a shadow into the cool Atlantic waters. In July, these traditional wooden boats will be making their way into the clear blue for the annual Great Fogo Island Punt Race to There and Back, and event coordinator, Decker is a busy man. The award-winning race is designed to breathe new life into the once-ubiquitous punt and all it represents to the heritage of Fogo Island. One of many innovative projects created by the Shorefast Foundation—the brainchild of resident social entrepreneur Zita Cobb—the hope is to revitalize a community that’s faced its share of challenges.

Back inside the Decker home, I’m sitting next to Cobb while a customary Jiggs dinner is served. Decker offers a crash course in Fogo Island punt making, including its eschewing of fiberglass and other modern materials. He then takes out a photo album depicting his hometown of yore, a place where traditional saltbox homes were once filled to the brim, where wooden flakes were as common as partridgeberries and where the cod fishery was a sustainable way of life. 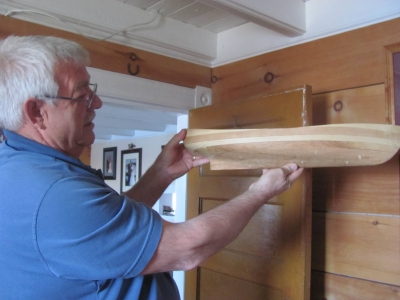 Peter Decker and his punt models

Boasting 110 square miles off the Northeast coast of Newfoundland, Fogo Island is made up of 11 distinct communities that roughly 2,700 people call home. A prototypical Newfoundland outport, the island is enveloped by water and magnificent craggy rock. But a cod moratorium in 1992 effectively turned the place upside down, with many residents leaving in search of greener opportunities. To be sure, the island remains a fishing town—now more reliant on crab and lobster (cod is making a slow comeback, of sorts, thanks to the cod pot, a newly sustainable method of harvesting that Shorefast can take some credit for)—but Fogo Island has never been the same since.

Enter Cobb. Fogo Islander born and bred, she returned to her hometown a few years ago with one objective: revitalize her community by recreating a sustainable, resilient and self-sufficient Fogo Island. With a $16 million investment ($5 million each from the provincial and federal governments and $6 million from Cobb herself), Cobb and her family started the Shorefast Foundation. Central to their efforts is a focus on the arts as a powerful force of change, under the auspices of the Fogo Island Arts Corporation. Art asks questions, explains Cobb. “It’s always future oriented; it’s about where we are and where we’re going.”  Led by Elisabet Gunnarsdottir, a former Icelander who was running the Nordic Artists’ Centre in Norway before Cobb brought her here, the two share a passion for creative resiliency. “Creativity is so important for people to find new solutions in their life,” says Gunnarsdottir.

The plans include an artist residency program that invites international contemporary artists to live and work here, engaging in a veritable cultural exchange with locals. It’s a way of bringing the world to small places and local to the world, explains Gunnarsdottir. “That’s when the magic happens.” An artist production program, meanwhile, offers a variety of artistic projects, seminars and conferences. And then there are the six artist residencies (four are standing already). Contemporary art projects in their own right, each is completely off-grid and uniquely designed with breathtaking views and a minimalist approach, thanks to world renowned architect Todd Saunders. Stark, fresh and bold, drive across the island and, like the pyramids of Giza, the structures are hard to miss. 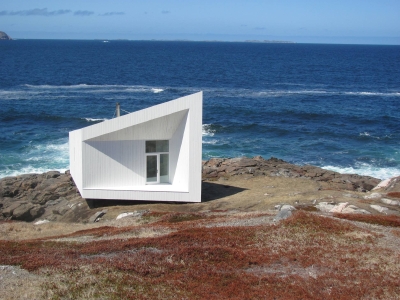 By this time next year, the residencies will be joined by a 29-room world-class inn. Appealing to the geotourist with a nice sum of discretionary income (rooms are priced at more than $400), the inn will feature a spa, heritage library, conference centre, art gallery, and an e-cinema in partnership with the NFB. (The only English one in Canada, the partnership is actually the second with the NFB. The first in the 1960s led to the now-famous Fogo Island Process, a type of filmmaking led by Colin Lowe designed to promote community engagement and social change.)

Destined to share the stage with the most luxurious inns across the globe, it’s clear Cobb is searching for a very specific patron, one who values a connection with people and nature and who has a penchant for living well and responsibly. As we tour the construction site, Cobb speaks of challenges encountered due to the inn’s intricate blueprint, including drilling into rock and equipping every room with ocean views, windows that open (a novelty in the hotel industry), and low carbon footprints. But Cobb isn’t one to back down easy. “It’s about aiming for the best,” echoes Gunnarsdottir. 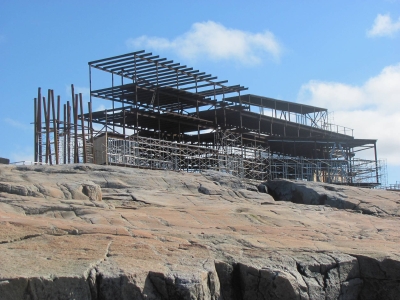 Of course, to be the best, Shorefast projects must benefit residents and tourists alike. “Otherwise we’re a failure,” says Cobb emphatically. Job creation and resiliency is paramount, with all profits reinvested in community. Community quilters, for instance, are currently hard at work creating the exquisite bedding that will adorn the inn’s beds. I witnessed the ribbon-cutting ceremony that celebrated the handing over of material to the group of talented crafters. It was a proud day for all. “The quilts are an example of how the inn is becoming part of the fabric of the local business community,” enthused Cobb.

What’s more, every initiative is a creative melding of past and present. Finding new ways with old things is the Shorefast mantra, after all. “Old gives new meaning to new and vice versa,” says Cobb. Yvonne Mullock—a UK-based artist hired to oversee the purchasing of material—explains her process further, “I just held up a mirror to what was already here.” The interiors of the inn, meanwhile—beds, chairs, tables etc.— are inspired by traditional elements, ensuring the past is never lost and visitors remain aware of where they’ve come and why. 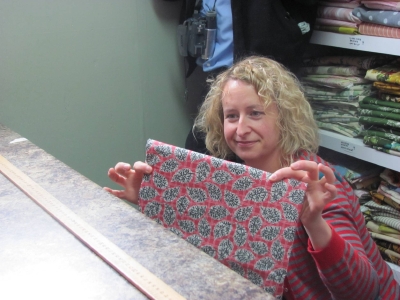 Yvonne Mullock with quilt fabric for the Fogo Island Inn

Shorefast is pursuing and supporting plenty of other projects too, including the punt race mentioned above. And, thanks to an outside donor, there’s a microfinance business fund helping local entrepreneurs get up and running. To wit: Nicole’s Café, a relatively new dining establishment on the island whose staff was trained by some of the top chefs in the country. A cozy spot, it’s known for traditional fare that takes full advantage of the island’s natural resources like the “Cod Pot Cod” and partridgeberry scones.

Thanks in large part to Zita Cobb and an infusion of innovation, Fogo Island is going through a revival unparalleled. But social innovation is not a new concept here. When the community faced a threat of resettlement in the 60s, for example, they rallied together and started a fishing cooperative, taking over ownership of all fish plants on the island. In fact, you could say innovation—along with a love for the arts—is in the Fogo Islanders’ DNA. It’s about staying relevant, vibrant and sustainable, says Cobb. After all, she adds, “Change is inevitable, but can you do it in a way that keeps the essence of who you are?” That is the ultimate question.