Houston’s Farm Dirt: Change from the ground up 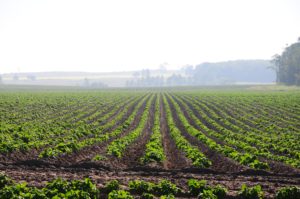 Potato field in Melancthon, Canada, photographed by John Church and published in In the Hills Magazine

I have a confession – I love dirt. This stems from growing up on a potato farm; I can close my eyes and bring myself back to my childhood where my father would come home from work and give me a big hug, smelling like nothing other than rich, wonderful dirt. Apart from nostalgic feelings, I love what soil represents – a key ingredient necessary to create new life. Without nutrient-rich soil the natural world would decay into a sterile desert. Unfortunately desertification is a real problem today, but that’s a topic for another discussion.

I am not alone in my love for dirt, take Houston example – Farm Dirt. This company creates high-quality soil rich in microbial life through a super-efficient process using local food scraps and wood chips. The compost is then used by sustainable agriculture projects throughout Houston’s inner city, such as Last Organic Outpost. Farm Dirt founder, Danny Wilson, identified an inefficient, broken system where valuable organic material was being wasted. This agent of change is shaping urban composting in Houston, disrupting the status quo to create a new equilibrium.

“What I like about being a social entrepreneur is that the better the business does, the more we help the environment, which helps everyone, so it’s a win-win-win situation,” says Wilson.

Starting with the support of Whole Foods, Farm Dirt has continued to grow and is now helping Houston Independent School District (HISD) become the first major school district in the nation to compost district-wide. We have already seen this systematic waste management shift happen with recycling, which at one point was a new concept, and is now generally mainstream and integrated into people’s daily routine. I spent some time working for the waste management division at Dufferin County in Ontario, Canada. While I was there, my inspiring manager decided to implement a pilot composting program. So we rolled out “Green Bins”, educated the public, and integrated composting into the existing waste management process. The program is now region-wide and, along with recycling, achieves a 54% landfill diversion rate (1).

What else do social entrepreneurs and dirt have in common?

The social entrepreneur has been described as many things. According to John Elkington, founder of Volans and co-founder of SustainAbility and ENDS, they are unreasonable, wildly ambitious and 70% crazy (2). Executive Director of Good Works Houston, Amir Eskafyan believes these individuals value themselves by the impact they make, embrace a spirit of collaboration, and are militantly fair throughout the value chain of their organization. Joseph Schumpeter, an early 20th century Austrian economist, argued that entrepreneurs are innovators required to drive economic growth and progress (3). Naturally, I see them as the dirt of society (in the best possible way). For this is the makeup of people who are propagating solutions to some of the world’s biggest challenges, from poverty to climate change.

When I think of an entrepreneur, the frightening 90% failure rate comes to mind, and this relates to startups whose primary objective is financial return. Now consider businesses that seek to be profitable while achieving social and environmental progress; it’s hard to believe that any would succeed under these odds. Well, I have good news. Many social impact ventures are exceeding historic success rates for new businesses. For many people, their sense of purpose is fulfilled through relationships, extra-curricular activities or other aspects of their life outside of work. Something that amazes me about social entrepreneurs is that many have managed to merge their career with their passions so closely that it means they love what they do, which can lead to a greater likelihood of being successful due to enhanced focus and purpose.

Quite simply, the world would be a better place.

In a twist on the traditional direction of knowledge-transfer, social impact ventures are burgeoning in developing countries with strategies and technologies that can be applied in the developed world. Piramal Sarvajal is using market-based solutions and Water ATMs to address water sanitation in India. Eneza Education is an edtech platform that started in Kenya and delivers education online, through smartphones and via SMS. Blake Mycoskie, the founder of TOMS, not only mastered being a social entrepreneur himself with his innovative “one for one” business model, he is now investing $100 million into backing other socially driven companies to achieve their mission. Talk about creating a chain reaction of positive, systemic change.

Farm Dirt is changing the way Houston thinks about waste management, and creating a product that will trigger further positive growth. Some may argue the idea is wildly ambitious and 70% crazy, but these are exactly the ingredients we need to catalyze change, drive progress and create new equilibriums.

I would like to thank Danny Wilson and Amir Eskafyan for graciously allowing me to interview them for this article.

Michelle Prentice is an Associate at Clean Line Energy Partners, a company developing transmission lines to connect renewable energy resources in the United States to communities in need of clean low-cost power. Michelle also works with Good Works Houston, a nonprofit that supports entrepreneurs in launching innovative solutions to Houston’s most pressing social and environmental challenges. Michelle has a Master in Development Practice from Sciences Po Paris, and a Degree in Environment and Business from the University of Waterloo.