Impact to Last: Lessons from the front lines of social enterprise

Bri was on the wrong path, in and out of jail for arson and three felony charges prior to learning she was pregnant at 22, at which point she resolved to make a better life for herself and her daughter. She began taking advantage of social services but still felt lost and overwhelmed without a stable job.

Women’s Bean Project (WBP), a social enterprise whose intensive transitional work program is known for the production of handcrafted gourmet foods and jewelry, provided Bri the opportunity she needed – thanks in part to a growing supplier relationship with Walmart. Bri is now confident, clean, and sober with new skills for finding permanent employment, and proud to no longer be the same young woman she once was.

Dion Drew was born and raised in Yonkers and, without enough money to make ends meet, started selling drugs and was sentenced to four years in federal prison. He reentered the community eager to start a new life; however, his criminal history was making it difficult to find work – until he discovered Greyston Bakery, a for-profit Benefit Corporation that produces four million pounds of brownies and cookies annually, primarily for large customers including Ben & Jerry’s, now part of Unilever.

Dion has been working at the bakery for seven years, which has enabled him to settle down and start a family. “I can’t really explain the things Greyston has done for me. It saved my life. If I was still on the streets I would be dead or in jail,” he said in a recent TED Talk.

The “cost” to Ben & Jerry’s of working with Greyston? A supplier relationship Unilever holds up as an example of the way in which it would like other businesses in its portfolio to operate. Explains Sean Greenwood, “Grand Poobah” of Public Relations for Ben & Jerry’s: “I feel as lucky to be associated with Greyston and try to be more appreciative of Greyston than they are with us.” 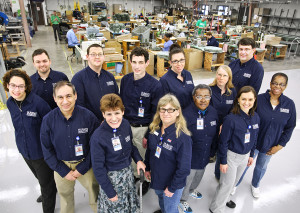 The group of inspirational Story Tellers pose for a p photo at the Dwyer Ave campus of Human Technologies on Tuesday March 17, 2015 in Utica, NY.

Tommy Fields remembers struggling to maintain his composure while being yelled at and talked down to by employers.

That was before joining Bank of America’s Support Services Division (“Support Services”), a high-performing team of 300 back office workers, most of whom are individuals with an array of disabilities.

Now, working in the warehouse and mail center, Tommy says he loves conceiving of better processes and systems, and having his ideas taken seriously by management. He also appreciates his health, dental, and vision coverage, which make it possible to support his family.

And the “cost” to BofA? Services delivered with exceptional accuracy and quality, discerning customers who provide repeat business 95 percent of the time, and almost zero staff turnover.

The “hack” that is social enterprise

These are the quiet successes of social enterprise, the growing community of mission-driven businesses that hire and assist people who are willing and able to work but have the hardest time getting a job:

– Lives transformed (10,000 of them annually at the 10 social enterprises featured in REDF’s just-published case study initiative Impact to Last, including WBP, Greyston, and Support Services); and
– Robust business partnerships that are value-adding in every sense: economically, socially, and culturally.

Walmart has granted WBP drop-shipping privileges, essentially providing customers with direct access to WBP’s entire catalog. Unilever invited Mike Brady, Greyston’s CEO, to participate in a series of TED Talks coordinated by the corporation. BofA has expanded Support Services to three locations in Delaware, Texas, and Maine, and is eager to have the team represented in every U.S. time zone.

Like Walmart, Unilever, and BofA, business partners to social enterprises are discovering that, in many cases, the social enterprise business model that values every employee and devotes time and resources to their success also places an uncompromising emphasis on the quality of services delivered to customers – partly to dispel any preconceptions that people with histories of unemployment, incarceration, addiction, and overlooked abilities are not up for the job.

This is a stellar example of “shared value,” the concept that has popularized the competitive edge companies gain by proactively addressing social problems connected with their business. But more than that, social enterprise really represents a “hack” to the traditional approach to business – one that has the potential to revolutionize the way companies bring people who have faced tough times into the workforce.

Thanks to a comprehensive recent evaluation, we know that for every dollar social enterprises spend, they return $2.23 to society, including $1.31 to taxpayers from reductions in government benefits and increases in revenues.

If only we could click our heels and grow social enterprise exponentially, we know America would be better for it.

But social enterprises are like any other businesses and, like their peers, struggle to overcome myriad hurdles, from the lack of resources and capacity, to the difficulties inherent in developing commercially viable products and services, to the need for strong financial oversight and leadership. And given their social mission, they require particularly strong people management to prepare and engage their intended workforce. 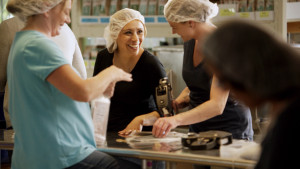 Understanding what has made several of the nation’s most successful social enterprises tick was the premise behind Impact to Last, an effort to look closely at how 10 organizations with a combined 300 years of operating history have survived, thrived, and are delivering impact at scale: 10,000 jobs annually, one-year job retention rates for transitioning employees averaging 75 percent, and over $150 million in revenue, 80 percent of which comes from business operations.

What we discovered was a consistent set of drivers and, as a result, clear signposts to guide not just other social enterprises, but the institutional backers intrigued by the quiet successes of social enterprise and interested in forging a common ground from which to explore a systemic approach to workforce change.

Social enterprises succeed when businesses, government actors, funders, and investors work together to bolster the core business models that become sustainable engines of economic opportunity and individual transformation over time, whether by being an anchor customer, providing growth capital, or creating an enabling policy environment.

Given the scope of untapped talent in the U.S. and the related challenges we face as a nation, now is the time to plant and fertilize a whole new generation of companies with sustainable business models that open up jobs to those who face the toughest hurdles. Until recently, we might have said this required a bold vision and courage. But we now know it just takes common sense. With the examples and evidence of what works in hand, now is the time to take action and deliver the social enterprise solution at scale, providing a competitive edge we cannot afford to live without.

Carla Javits is President and CEO of REDF. Ben Thornley is a Managing Partner at Tideline.