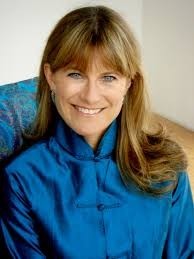 It is a warm evening, early in the summer, and the Shopify offices are packed for the Toronto+Acumen event. Clean and modern, their aesthetic is matched by the young professionals who have flocked here, dressed to impress. While we sit, pecking at the bison meat and chicken liver canapés, the atmosphere is humming with the anticipation of a celebrity. “Have you read Jacqueline’s book?” and “Have you been following Jacqueline’s work?” pepper conversations about work and the city.

When she finally enters, she is more than the typical CEO: clad in a magnificently embroidered shirt and capris, she radiates a blend of grace and self-assurance that captivate the millennial crowd. Early on, she says, “In a way I feel like I’m connected more to your generation than my own.” No one bats an eyelid.

This is Jacqueline Novogratz, whose numerous TED talks and book, The Blue Sweater, have brought her international attention. She is the founder and CEO of Acumen a company acclaimed for its work investing in social ventures around the world, providing the capital needed to transform these startups into profitable, functioning enterprises. The criteria to be considered by Acumen? To do good work, the type that helps the poor while ultimately generating a sustainable profit. Repo companies that use women instead of men; purveyors of solar torches that do enough market research to realize exactly what changes need to be made for the poor to trust their product – these are the types of business ventures that excite Novogratz and her colleagues. They tie into what makes Acumen tick: the belief that, rather than turning to charity, we should look to empower others.

This would mean believing, as Novogratz does, that profits and good work are not mutually exclusive. The attendees are here, of course, because they want to know how to make this a reality the way that Novogratz has. She says her road to Acumen started during her Catholic upbringing, where she was one of seven siblings. With her father off fighting in Vietnam, one of her greatest role models was an eighty-year-old nun who rewarded perfect Sunday school assignments with cards containing the stories of the saints. For Novogratz, those cards were more than just rewards. They served as an early example of social justice. As she says, “They were my first introduction to people who lived for an idea.”

Perhaps it was that inspiration that led her to take such a different path than her Stanford peers. Although she started working for Chase Manhattan Bank after graduating with an MBA, she soon left to pursue microfinance and, eventually, impact investing. Acumen began 14 years ago with patient capital at its core. It may have evolved over the years but its message remains constant.

Now that she has built this enterprise, Novogratz is keen to share what she’s learned from the experience. First, the most important thing for any social entrepreneur is the ability to really help your target demographic. “We learned that ‘build it and they will come’ is a big fat lie.” With the introduction of solar technology in Kenya, “The poor didn’t like it because they didn’t trust it.” At least, they were wary until amendments like the introduction of cell phone banking allowed people to finance it incrementally, introducing some much-needed stability. “What you find out is that if you really put yourself in their shoes, there is nothing irrational about any of it.”

What least serves the interests of the poor? Corruption, says Novogratz. “If you care about the poor… you have to fight it and take it on.” To people and things that hurt the poor, Novogratz has this to say: “Watch out, because we will come after you.” This tenacity is part of what makes her, in moderator Allison Hunt’s words, a “practical idealist.” Novogratz defines the term as having “a head for business and a heart for the world,” saying that in order to help the poor, at times “we have to make brutal decisions.” Because they need to be profitable, one of Acumen’s investments was forced to downsize. That meant shutting down several maternal hospitals — never a good feeling for a social good organization.

Yet despite Acumen’s willingness to make these tough decisions, Novogratz recounts Acumen being turned down for a large bank loan. “When I talked to the head of this big financial institution, and these would be for our companies that are really growing … the woman said, ‘We love what you do, but the problem is, we’re worried that you’re not real investors…. When push comes to shove, are you going to choose to protect the poor or are you going to choose to protect your shareholders?’” For Novogratz, this came as a shock. She sees the field of impact investing, social enterprise as one that prioritizes social welfare in the now while generating long-term profits. “I make a plea for nuance, because there is a feeling of ‘We love you but it’s not real.’ And how do you co-opt that language and say, well what is real?…. If all we do is protect shareholder interests and forget about stakeholders of the earth, and the poor, and the marginalized, well we’re getting the world that we’re in right now. And we owe it to ourselves to think about how we might change that.”

As someone on the boards of several business schools, she sees putting social entrepreneurship at the heart of MBA programs as a necessary step to making that kind of change. At the same time, she makes a plea for practical idealists to go where they can make the greatest difference. If they have a set idea of what they want to achieve not offered elsewhere, then entrepreneurship is for them. Others can find work in good companies instead of striking out alone. Either way, introducing the concept to business students requires these future leaders to consider how their actions and modes of commerce resonate in such an interconnected world.

That’s the type of thinking that motivated Novogratz, after all. The title of her memoir, The Blue Sweater refers to the item of clothing she donated to Goodwill in high school that she saw on a young boy in Rwanda while starting a microfinance bank a decade later. Her name was still on the tag. “It has been held by me as a metaphor for how our action and our inaction impact people everyday around the world…. We are each other’s destiny in a funny, funny way.”