We all want to “do good by doing right.” We don’t throw garbage on the ground. We recycle. We buy enviro-friendly cleaning products. We…wait, what’s that you say? My bottle of dish soap with the cute little duck on the label isn’t saving the world? Doesn’t green mean good? Not necessarily, according to the new documentary, Greenwashers.

Part documentary, part satire, and thoroughly clever, the film follows two “greenwashing consultants” as they work the environmental convention circuit in the US. Along the way they meet representatives from all kinds of “eco-friendly” companies that are trying to help other businesses “go green.” Whether it’s switching to a different kind of toilet paper, or slapping their logo on a reusable drinking bottle, options abound for business owners looking to “green” their image. But the question filmmaker Bret Malley poses is whether any of these actions are truly green. (Spoiler alert: they’re not.) 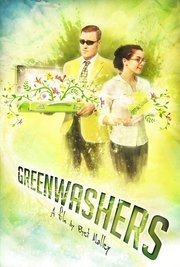 Once you wade through the rhetoric and the pretty pictures, what you find is that many companies aren’t actually environmentally responsible, they are just very good at marketing. Or as writer and environmental activist Bill McKibben puts it, “The more penguins per ad, the more damage the company is doing to the world.”

That may sound like an oversimplification but once you peel back the layers of greenwashing, it’s evident that he’s not far off base. One segment of the film tracks BP’s environmental record over the past decade and shows that the worse their enviro crimes became, the higher their marketing budget climbed. It literally gave me shivers.

Luckily, interspersed with these heavy realizations are lots of flat-out funny moments as greenwashers Alex and Vivian (played by Bret Malley and Kelli Pennington) make their way through the green expos and take us on a tour of their biggest success, the greenwashing of a Syracuse mall. “All the environmentalists here, once we got LEED certified, they just shut the hell up. They can’t say anything once we get that certification,” boasts Alex, before throwing his Mountain Dew bottle to the ground in the mall parking lot. “They have people to clean that up.”

Although I wasn’t completely sure at the beginning which segments were satire and which were real, I quickly caught on and was happy to tag along with the greenwashers on their tour of “green” America. The results are almost tragicomic as you hear representatives at the green conventions speak about their products with such conviction and respond enthusiastically to Alex and Vivian’s schtick. I could almost feel sorry for them. Almost.

But there can be no feeling sorry for the giant corporations that are duping America and the world with their so-called green initiatives. From manipulative packaging, to sneaky product placement, and a few outright lies, these household names are definitely guilty of the seven sins of greenwashing, and Greenwashers has no trouble exposing them.

This is a funny, smart and thought-provoking film that will stay with you well beyond the credits. In fact, you’ll probably have a lot harder time feeling good about your next dish soap purchase. And that’s the point.

Greenwashers is currently making the rounds on the film festival circuit. Watch for it in your area. For more information, visit: www.thegreenwashersfilm.com.

Nicole Zummach is the co-founder and editor-in-chief of SEE Change Magazine. She has worked in the publishing industry for more than a decade, and has spent most of her career researching and writing about civil society and the nonprofit sector. Contact her at nicole@seechangemagazine.com