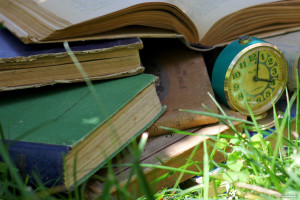 On Canada’s west coast, in an orchard on British Columbia’s Gabriola Island, a small publishing house is working to give individuals the tools to change their societies. New Society Publishers was around long before the idea of social entrepreneurship became ingrained in the popular parlance. Yet, as awareness of alternative ways of structuring our economies grows, their story remains an important one. Through their passion and hard work, New Society has survived many changes – including going from non-profit to for-profit, and twice from imprint to stand-alone – and is now taking the next step by matching the company’s methods to its underlying principles.

This past September, the employees voted to pass a shareholders’ agreement that would put in place an Employee Trust. Thanks to the support of Carol Newell of Renewal Partners, employees now share in both New Society’s ownership and profits. To learn more about these changes, I spoke with Julie Raddysh, the eldest daughter of co-founders Christopher (Kip) and Judith Plant and now the company’s Director of Operations.

The Plants did not set out to become publishers. They were passionate activists among British Columbia’s progressive community, interested in the eco-feminist and peace movements, among others. Yet life has a way of making things happen, and they transformed these passions into The New Catalyst, a quarterly magazine published out of their BC home.

At that time, New Society Publishers was a distant business run collectively out of Philadelphia. After a chance meeting with the American owners grew into a friendship, the Americans eventually convinced the Plants to shift their focus. They made the difficult decision to move away from their magazine and toward a Canadian imprint of New Society. This imprint would go on to replace its American counterpart when the latter ran into financial difficulty, making the transition to a for-profit enterprise around the same time.

Decades later, this “Ma and Pa” enterprise is still around. Its story is one of growth and resilience: as many publishing houses downsized, New Society managed to adapt to changing conditions. It was in this landscape that, roughly a decade ago, the Plants were forced to decide what would happen to the company after they stepped aside. It is here that our story begins.

In 2008, the company was bought by Douglas & McIntyre (D&M). At this time, says Raddysh, it “functioned under the umbrella of a much larger corporate publishing house” – meaning some creative freedom within a bigger machine. After D&M filed for bankruptcy, the Plants were able to buy back New Society in 2013 with the help of Newell, a former investor.

As Judith Plant describes in her retrospective talk, Gathering the Threads, “It was a fearful time… we knew the banks were looking for a bottom-feeder: a company that would buy the business for pennies, let go of the staff, and sell off the inventory at bargain prices.” Newell’s intervention allowed New Society to survive, and in the wake of the failed corporate route, they were able to try something that Raddysh describes as “more in line with New Society’s mission.” As she says,

“We wanted to create something new that had a greater focus [than] the bottom line…. Our shareholders have proven that instead of taking the route of accumulating profits they have chosen the triple bottom line valuing the social, environmental and financial aspects of the company.”

It was this goal that pushed the Plants toward an Employee Trust. The move allowed them to once again embrace their mission while retaining the practical benefits of being a for-profit. Under the new agreement, employees are now entitled to one third ownership of the company’s shares with the other two thirds held by Plant and Newell. The Board of Directors consists of a representative of each major group with two spaces reserved for industry representatives should they be needed. The staff is able to vote for its representative to the Board and the three members on the Trust: “one from the general staff body, one from our management team and one who sits on both boards.”

Employees are now better able to contribute to the direction of the company, while sharing in its wealth. In addition to the third of shares they own, employees are entitled to half of the company’s growth. The Employee Trust was created not just to achieve convergence with the company’s purpose, but also as a means of recognizing the dedication of their employees. As such, employees are not required to make a financial contribution; Renewal Partners redistributed their shares to create the Employee Trust, in recognition of that dedication. “Our staff is not only in this for the love of publishing but also for the desire and dedication to help make the world a better place,” describes Raddysh. In fact, when D&M’s ownership of New Society ended, the employees banded together to try and buy the company. While unsuccessful, this effort motivated the Plants’ decision to change the financial structure of the business.

The Employee Trust has been a long time coming: when New Society became a for-profit, there was tension between the ideas espoused in their books and their new structure as a profit-driven company. This is not to suggest that the move to a for-profit enterprise threatened their mission “to provide tools for positive change in the world and building blocks for new healthier society.” Rather, New Society’s trajectory asks us to consider how best to achieve change. Is it by practicing what you preach, so that internally you remain as egalitarian and redistributive as possible? Is it through the wide reach of more traditional corporate efforts?

To me, New Society’s approach has synthesized the two paths, as many of today’s social enterprises have. The Plants recognized the pitfalls of the strictly cooperative system adopted by their American counterparts, but their recent experience with D&M showed them the perils that can come of a more corporate strategy. For those looking to adopt a business model in line with social enterprise, they could do worse than this middle path taken by New Society.

How does the change feel for those at New Society? “The feedback has been great,” says Raddysh. “For our team it really feels normal.” No matter what the future brings, the spirit of New Society will remain intact. “Basically we will continue doing what we love, and we are always trying to do it in the best possible way.”