Putting a Smile on Their Face in Thailand: A volunteer reports 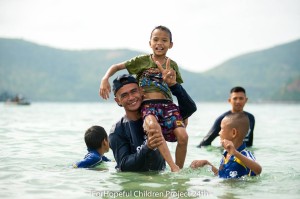 Just a smile changes the world – the motto of For Hopeful Children Project (FHCP) – resonated through all three days during which I was greeted with children and staff smiling ear to ear.

FHCP started with just a few volunteers and less than 100 children in 1991. Year by year, the numbers grew and this year I was one of over a hundred volunteers taking care of 1,200 disabled and underprivileged children from every region of Thailand.

The children arrived at the Royal Thai Marine Corps in Chonburi for a weekend of outdoor activities and festivities. As its name suggests, the aim of FHCP is to give children hope, of a better future and possibilities, despite the hardships they face – to put a smile on their face.

The annual event is an opportunity for the children to enjoy themselves as much as they can, a day they “look forward to all year, every year,” as a ten-year-old girl later told me. This was her third year coming to the camp.

I was designated to Building Four, which housed the visually impaired. I had worked at an open kitchen for the blind briefly so I knew the basics: make sure they have something to hold on to when they walk; gently touch their arm to get their attention; describe the obstacles in the surroundings.

While waiting for the children to arrive, I repeated the few Thai words I had learned that morning: left, right, be careful, and steps. I was nervous.

A fellow volunteer, Daria, shared her previous experience with children. “I was at the crafts table with a boy with severe autism. I was intimidated and was unsure of what to do because I had never met someone with a mental disability,” she said. “But children are simple. I showed him how to paste painted tissue papers to make papier-mâché and we connected without exchanging a word.”

I, too, agree with the popular adage that one does not need words to communicate. However, the visually impaired children I would take care of wouldn’t see my body language or facial expressions either– elements of communication that some psychologists argue constitute up to 80 percent of a message.

The bus arrived around midday and the children embarked with their caretakers. I approached one who did not have a caretaker and introduced myself. “Sawadeeka,” – Hello – I said, and gently touched her forearm with the back of my hand. I saw a faint smile in her face, and a Thai volunteer nearby explained to her I was foreign and introduced us by our names. Hers was Moratai.

I took her hand and we walked up to the living quarters. As she took cautious steps up the stairs, she squeezed my hand to find balance. It was a simple gesture, but it touched me to realize she was entrusting me with her safety.

The outdoor activity I joined later was a demonstration by the navy’s fire department. They put out small fires amidst the large lawn and later let the children stand on a platform attached to a crane that rose up to sixty meters, high enough to get the full view of the marine base. Because Moratai was too frightened to go on the crane, we enjoyed a private picnic while we waited for others.

At this point I had already fed her lunch and knew her fondness for the cat noise I made whenever she requested it by saying “Miao-miao,” or ‘kitty.’ She followed me around, her small feet traipsing through the grass and her pigtails bouncing up and down. I walked about the green, meowing, clapping, and shaking the ice-cubes in my water bottle to make the sound of a rattle. Eventually she caught me and I dropped the bottle. Under the scorching sun neither of us minded the cold splash it made on our bare legs.

The highlights of the camp each year are a visit to the beach and performances by each group after dinner, since few children at the camp had had the chance to vacation at a beach or go to a concert. The performances on both Saturday and Sunday stretched into merrymaking that lasted late into the night, where the younger children started to doze off in the volunteers’ lap, yet still refused to go to bed.

The concert hall was more of a giant bodega with a stage. Moratai and other children from Building Four were dancing. We had removed the plastic chairs to the side so that they can walk about without tumbling over. It was curious that they had never watched a rock music video, yet had still mastered the head-banging routine.

I watched them jump around, stamp their feet and sway to the rhythm, the expressions on their faces more colorful than the bright lights beaming overhead.

The cool night breeze tickled my forehead and I thought back to the morning of the kids’ arrival. On the second floor of Building Four the group unpacked and the marines moved around rickety bunk beds. One of the organizers, Harry, turned to me and asked, “Do you feel lucky?” He was referring to the gift of full sight the two of us had. I did. But in a different sense. I felt lucky not because I could see while others could not. Rather, I felt lucky because at FHCP I was reminded that no matter our differences – be it disability, nationality, language, age or background – we can all connect through our humanity – our most precious fortune.

Tara Lee is a freelance writer based in Hong Kong currently assigned to Humanitarian Affairs Asia in Thailand where she is helping to provide a platform for young entrepreneurs to come together and inspire each other. She has written on topics ranging from art, culture, technology and economics while studying journalism at the University of Hong Kong.