Saris on Scooters: How microcredit is changing village India

Small loans can be life-changing. Between 2001 and 2008, author and journalist Sheila McLeod Arnopoulos traveled over the span of 21 months to the most impoverished parts of rural India to investigate the transformative capacity of microfinance in combating poverty. Saris on Scooters: How Microcredit Is Changing Village India is the captivating result.

India can thank the information technology industry for its status as a rising superpower. Yet, in contrast to the success of its growing middle class, 80% of the over billion people who live in this predominately rural country make less than two dollars a day. Zero in on the women and the figures are even starker. Typically illiterate, they often marry young and work hard to support their families, all the while struggling in a world that considers them second or tertiary class citizens.

When Bangladeshi economist, founder of Grameen Bank and Nobel Peace Prize winner, Muhammad Yunus, developed the concept of microfinance—whereby small loans are given to poor entrepreneurs financially unable to secure traditional bank loans—he essentially started a revolution. Self-sufficiency suddenly became a realistic notion for businessmen and women worldwide. India jumped full-force onto the microfinance bandwagon and the industry has been growing at 70% annually over the past five years.

At the forefront of the movement are courageous women—many of them Dalits (formerly known as untouchables) from India’s poorest villages who are using microfinance to extricate themselves and their families from poverty. Wanting to see these revolutionaries for herself, Arnopoulos set out on her pilgrimages. But she didn’t simply show up, conduct some interviews and return home. An acclaimed investigative journalist who recently spoke at the 2010 Microfinance Conference in Toronto, Arnopoulos tends to get up close and personal to her subjects. So, traveling by rickskaw, bus, motor scooter, sleeping on the floors of bare-boned huts, Arnopoulos engaged these revolutionaries the only way she knows how. 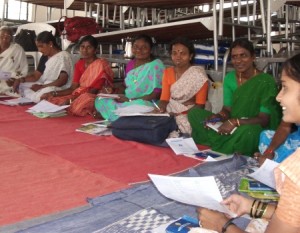 As a result, her stories are imbued with a sense of authenticity and humanity unparalleled. Saris with Scooters is more than just a story about microfinance. Part travelogue, part social studies thesis and part economics lesson, Arnopoulos allows readers a uniquely personal glimpse into the lives of female pioneers. Some went from making pennies a day working as coolies on other people’s lands to investing in their own. Others started a farmer-run organic cotton grower/producer company, doubling their income and improving the health of their land in the process. And some women started newspapers, providing content on social issues; many are now writing for mainstream publications.

But the microcredit narrative in rural India goes way deeper than that. It’s also a statement on the power of collaboration in effecting change on a macro scale. Through supportive networks, women are not only succeeding in business, they’re fighting prejudices, child labour, and making significant strides on the road to equality and social justice. Take the 33,000 Dalit and tribal women in 400 villages who formed 15 cooperatives and used small loans to run a sand quarry and are in the process of launching a dairy. Their ability to mobilize and collaborate proved especially fruitful when it came to combating bureaucracy and the male-dominated world they were striving to grab a piece of. 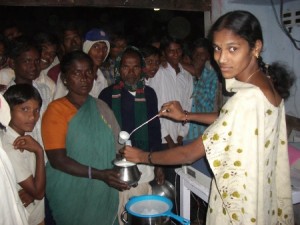 Of course, current news reports out of India offer a sobering twist to the book’s generally optimistic and uplifting profiles. Critics are cautioning that the microcredit model in India is being exploited by commercial greed, with abusive collection methods and high interest rates becoming more pervasive. In Andhra Pradesh, boasting the highest number of microlending businesses in India, reports say at least 25 defaulters have committed suicide in the past few months, with many others struggling to repay their debts.

Hoping to avert what many say could be India’s version of the United States’ subprime mortgage catastrophe, India’s government is introducing a national law to keep microlending institutions in check. The Andhra Pradesh government, meanwhile, has already introduced an interim law restricting how companies lend and collect money.

Challenges aside, Saris on Scooters stands on its own as a powerful message about what can happen when resources meet courage and entrepreneurial activism. It’s not a perfect solution, for sure, but loans are undoubtedly impacting the socioeconomic realities for many. Tackling their economic disparity, women in India are on a grassroots movement toward equality, human rights and social change.