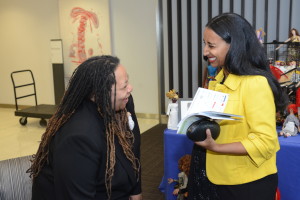 The year is 2002 and 22-year-old Alfa Demmellash, a Harvard junior, stands atop a hill in Kibuye, Rwanda, eight years after the 1994 genocide of almost a million people, to witness a memorial — and to observe how the Tutsi and Hutu are trying to live together again. While she’s there, she observes female entrepreneurialism at work. Women are running farms and managing successful coffee bean cooperatives. They are helping to rebuild Rwanda’s economy.

Research brought Demmellash to Rwanda, but being a global citizen and surviving her own childhood in Ethiopia helped her empathize. This would shape her goals of community building and empowering entrepreneurs. It would also help spark the founding in 2004 of Rising Tide Capital (RTC), a New-Jersey-based organization dedicated to assisting struggling individuals and communities build strong businesses which transform lives, strengthen families, and build sustainable communities.

Demmellash’s life began in Addis Ababa, Ethiopia. When she was two, her mother fled the country, leaving the toddler in the care of her grandmother and aunt. She lived on less than a dollar a day but never considered herself poor and nearly a decade later, she and her mother reunited in Boston, Massachusetts. Her mother worked as a waitress during the day and a seamstress at night to earn money to bring her daughter to the United States. She worked tirelessly to keep her daughter fed, clothed and in school.

Watching her mother sew beautiful gowns for low profit, the young girl thought there had to be a way for her to increase what she was making as a seamstress. During her teen years, Demmellash went with her mother to banks to see about starting a business, but the business terms were intimidating and unclear. In the process, she saw “a remarkable and dynamic woman” become discouraged, another experience that would inspire the soon-to-be-entrepreneur’s work.

Upon attending Harvard University, she and classmate Alex Forrester discussed what their generation could do to alleviate poverty on a local level. They set out to learn what resources people needed — or as Demmellash says, “To find people like my mom.”

Rising Tide grew out of a question that the duo posed to themselves: What role did their generation play in helping people, and what was the best way to use their education? The organization is dedicated to helping entrepreneurs in low-income communities start small businesses and, in some cases, help to keep owners in business. A social entrepreneur, Demmellash identifies a large-scale problem such as poverty and develops new approaches and business-type models to help people help themselves.

She believes by addressing the underlying issue of economic poverty, immense impact can result. And she’s proven it to be true. In 2008, she addressed the United Nations Global Summit on Women to talk about the connection between the entrepreneurial spirit and the economic empowerment of women. Demmellash was later saluted as a CNN Hero for being a community crusader and was invited to the White House, where President Obama honored her and other creative community crusaders. She later appeared on “Larry King Live” to discuss Rising Tide Capital and how entrepreneurialism can transform communities.

As she stated so eloquently, “The impact of entrepreneurship is beyond even the entrepreneur. There are stories of individuals who felt inspired and resourced and empowered by RTC and go out to create companies that are providing for their families. And are changing the way people see the world. Now people are thinking about what they are going to do to better themselves, get an education and start a business. People are feeling hopeful. They are hearing it from their neighbors or in the news when their neighbors have created a company and are making concrete steps toward achieving their future aspirations and dreams. In a way that makes people get started on their own visions and get involved in some way. This is when you know that something is different because of a mission-oriented entrepreneurship around transforming a community”

Rising Tide grew out of a dream to offer people a way out of poverty. Over ten years later, Demmellash and Forrester are now married and CEO and COO of Rising Tide Capital, respectively. The couple continues to explore innovative ideas and ways to build their organization, along with the people they are helping. With a vision to build a replicable model of Rising Tide Capital’s development services, they continue to work towards transforming lives and building communities through entrepreneurship.

Tatyerra Spurlock graduated from Ball State University with a BS in Public Relations in Spring 2015. She works at Rising Tide Capital