Send in the Clowns: Using humour to tackle pain 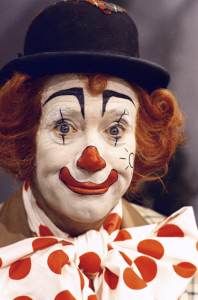 The evening I watched a performance by Edu-Clowns for the first time, I was in a foul mood. I had spent the day summarizing a rather tragic story of a Tuberculosis patient afflicted with an extensively drug resistant strain of the disease. I had been working for an NGO whose major projects were health initiatives in TB and HIV care and control in rural south India.

Still mulling over the complexity of the TB burden in the district, I accompanied visitors from a donor agency to a field visit and a performance by Edu-Clowns, a theatre group that campaigns for pertinent health-related issues. They use humour to educate the rural population about sensitive topics such as HIV, TB and sexual education. The organization I work with often collaborates with Edu-Clowns as a localized approach to de-stigmatizing socially taboo subjects.

The performance took place in a village forty minutes away by bus from the town office. Holding onto the handlebar above the window for my dear life, as you do in India, I recapped to myself the statistics I researched a few hours prior: 2.6 million reported cases of TB, comprising one-quarter of the world’s occurrence; 50% of healthcare supplied by private providers, whose practices are unregulated; 300,000 deaths from the treatable, curable disease annually.

The village could not have had more than a couple hundred inhabitants. We settled into plastic chairs, fixed in place, its legs stuck in the mud field, in front of the outdoor stage. Dusk fell and gradually villagers gathered around the stage. Edu-Clowns bantered, danced, sang, never stood still. The performance was presented entirely in the regional vernacular I did not understand so I took pleasure instead in watching children shriek in laughter and an elderly gentleman stroke his beard with a wry smile every now and then.

Throughout the performance, the field staff handed out pamphlets with information, such as an introduction to TB and HIV and the nearby government facilities that offered free services they could access. 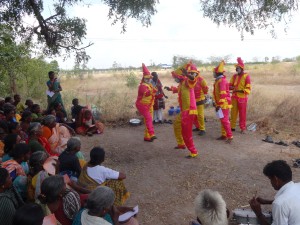 From the famed A Modest Proposal by Jonathan Swift to the popular modern satiric magazine The Onion, humour has had a long tradition as a social corrective. Humor alleviates tension, which opens the possibility to discussion, allowing people to learn the necessary information that can bring about change.

Although humour is contingent upon time, space and the person, in principle it operates on an understanding of social customs and ethos and an easing of tension created by contradictory forces within these customs and ethos. Take a behind-the-iron-curtain humour from the cold war era below for example: a man who has requested an exit visa to one of the Western countries is summoned to the police station. “Why do you want to leave? Isn’t your salary good enough? Is your work too hard?” he’s asked. “No, I can’t complain,” he responds. “ Isn’t your flat big enough?”  No, I can’t complain,” he repeats. “In that case, why do you want to leave?” is the frustrated response. “Just because I can’t complain!”

The norm imposed by a totalitarian country created tension in the citizenry who felt a lack of freedom of expression. The tension is relieved by humour. Laughter serves as a valve for the release of frustration. The alleviation creates space for discussion and the entertaining facet of it engages the audience.

Sri Lankan-American comedian and writer D’Lo was born a girl but realized assigned gender did not align with his identity. He started his career writing hip-hop and poetry, with characters who embodied personal stories that were both funny and painful. He uses his art today to confront issues such as police brutality, AIDS, political prisoners, violence and sexual orientation. Regarding his unique style he says, “I provide and maintain a safe space for people to be open and absorb information.”

Ensuing awareness promotes change. An Asian American performer and writer Kristina Wong takes on topics such as mental illness and mail-order brides. Her one-woman show “Wong Flew Over the Cuckoo’s Nest” tackled suicide and depression among Asian American women. When Wong performs at universities, there’s an increase in the number of students that enroll in the schools’ counseling service. Humor weakens the humiliation surrounding mental health problems and gives the sufferers an opportunity to re-frame the situation. Humour allows them to feel emotions other than fear of social exclusion, lifting the deterrence and encouraging them to seek help.

The removal of stigma is especially paramount in places like India, where tradition dictates the lives of the majority of the population. Recent economic growth and post-modern globalization has brought India to the world stage as an emerging power. In cities one can observe a cultural evolution, an adaption to these developments but even in metropolises like Delhi, traditions ensure. For example, the police impose a curfew of midnight for nightlife establishments.

Liberal outlooks, such as those allowing for openly addressing HIV and forms of prevention, are not shared by the vast majority who remains old-fashioned, conservative Hindus. One of the major reasons for default, or failure to complete TB treatment, is the stigma attached to the disease; TB treatment requires that a patient visit a health center three times a week, which makes their affliction obvious to the community, who might ill-treat them. Patients of HIV and TB are often barred from employment and disowned by their families.

On the way back from the performance, I watched the bus tilt capriciously every time we hit a bump on the unpaved dirt road. I pondered the grave problem, but recalled seeing Edu-Clowns temper the gravity of an issue, as they sang and danced in their bright yellow and pink costumes and hand out flyers in the same pink and yellow.

Oscar Wilde said, “Life is too important to take seriously.” He was always a jester. Comics push boundaries, inspire dialogue and help us confront the reality we might neglect otherwise. Perhaps that makes him a social entrepreneur in his own right. Comedy can neutralize prejudice and instead bring proactivity. I thought to myself, maybe TB is too important to take seriously.

Tara Lee is a freelance writer based in India. She was recently assigned to Humanitarian Affairs Asia in Thailand where she was helping to provide a platform for young entrepreneurs to come together and inspire each other. She has written on topics ranging from art, culture, technology and economics while studying journalism at the University of Hong Kong.