There exists a sector in the global economy representing more than 95% of the world’s business, contributing to over 50% of the world’s GDP, supporting large multi-national corporations, and triggering economic growth in developing countries. It is made up of small- and medium-sized enterprises (SMEs). And only a fraction of this sector has access to credit. This means that the single largest source of job creation remains largely unfinanced.

The vitality of SMEs is critical, within the international development agenda and beyond, especially in the context of emerging economies recovering from financial crisis. SMEs are often too small to attract commercial bank or investor interest, but too large to benefit from microfinance products. As a result, this “missing middle” tier faces barriers to growth: informality and bureaucracy in emerging economies; the domination of the private sector by corporations and micro-enterprises; and, of course, a significant lack of financing preventing entrepreneurship and scalability.

Regulatory restrictions favour large corporations, and SMEs are often obligated to follow large-scale commercial enterprise norms that are beyond their financial resources and human capacity. The mismatch between the needs of smaller firms and the supply of financial services being biased toward larger firms creates a “finance gap.” In response, SME entrepreneurs are compelled (one might say forced) to operate informally, often illegally, outside of government regulatory reach.

Further limiting SME successes are the sector’s intrinsic weaknesses, such as flaws in provider delivery models, which impact their access to financing. SMEs are widely considered to be at greater risk of failure, which negatively impacts their financing opportunities and increases the SME financing gap. Responding to these limitations, entrepreneurs rely on internal financing through personal networks to generate sufficient startup funds. The likelihood of a small- or medium-sized firm having access to a bank loan in low-income countries can be less than half of what it is for a larger firm. 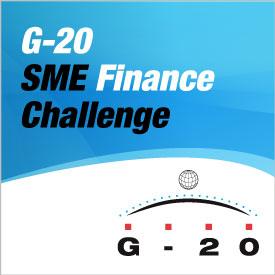 The development community has taken the initiative in filling this finance gap, and governments have begun to address deficiencies in the enabling environment to foster SME access to capital. In spite of their efforts, however, interventions have had mixed results, which is why the Group of 20 and Ashoka’s Changemakers – with support from the Rockefeller Foundation andDevelopment Banks worldwide – have launched the SME Finance Challenge, an online social entrepreneurship competition that aims to find the best models for public-private partnerships that catalyze finance for SMEs. The competition is a call to the private-sector to put forward its best proposals for how public finance can maximize the deployment of private capital on a sustainable and scalable basis. It will challenge the private-sector and those on the frontlines of SME access to find solutions that work and leverage the scarce public resources to support the “missing middle.”

This approach has the potential to drive sustainable development and rebuild the future.

John Townsend is a social change devotee, international traveller, and sports fanatic. Working for nonprofits internationally and domestically, he has been directly exposed to sustainable community investment and using business principles for social good. He recently co-founded a nonprofit, ChangeUP, designed to solve the existing social deficit by allowing everyone to give a “voluntary social investment.” You can reach him at jctowns[at]gmail[dot]com or follow him on Twitter @JohnCTownsend.