It’s 1am on a Friday and I’m on a makeshift dance floor at the home of Joel and Dana Solomon on Cortes Island, British Columbia, 100 miles north of Vancouver. A lovely house that caresses both forest and ocean, it’s a perfect spot for a party.

The guy to my left is a life/business coach and investor. He’s come to the Social Venture Institute (SVI) Hollyhock to see, learn, listen. And, apparently, to dance. The chatty dude to my right was the CEO of a renowned Vancouver nonprofit and has now started his own organization. He talks to me about the ever-growing landscape for social enterprise, his visionary cadence in sync with the boom boom boom of the 80s playlist. The rest of the gang are spread out across the house or sitting by the open fire pit in the front yard, the meta-chatter around social change a distinct harmonizing accompaniment to the evening. 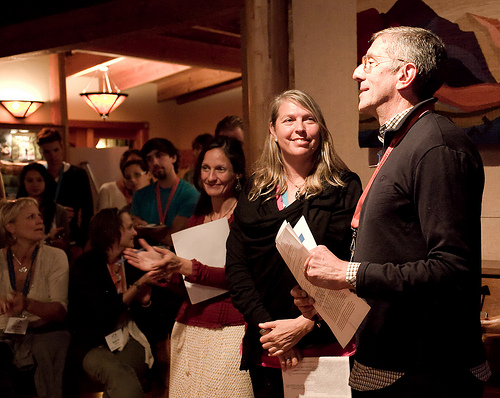 Nighttime parties – like clothing-optional hot tub sessions – are the norm at the Social Venture Institute (SVI) Hollyhock, a three-day conference bringing together socially minded entrepreneurs to learn, engage and support each others’ mission and often-challenging road to success. You see, as far as business conferences go, SVI ain’t like the others. The first clue is the dress code. Wonderfully casual with nary a heel, tie nor suit jacket in sight, jeans and flip flops are the common attire (though shoes are removed before entering buildings). Meals are primarily vegetarian, organic and locally grown when possible.

Then there’s the accommodations, which include dorms and camping. Though, lucky for this finicky sleeper – and everyone around me (believe me) – Hollyhock also offers single and shared rooms. Mine was situated ocean-side, a perfect perch from which to watch the island’s resident deer graze each afternoon.

And, yes, considering our location in the self-proclaimed left-leaning bastion of B.C., there was the requisite touchy feely session or two and even the occasional chanting of sorts, all of which I observed with the wide-eyed fascination of a middle-of-the-road Torontonian whose idea of “touchy feely” is changing my relationship status on Facebook from single to “it’s complicated” (then again, this Easterner pulled herself out of bed for the 7am yoga sessions, so let’s not rule her out just yet).

No question, SVI took some getting used for this Type A++. But its informality (casual one-on-one meetings were encouraged throughout) and unique character were most welcome alternatives to the stuffy, buttoned-up affairs that are par for the tiresome course in my world. 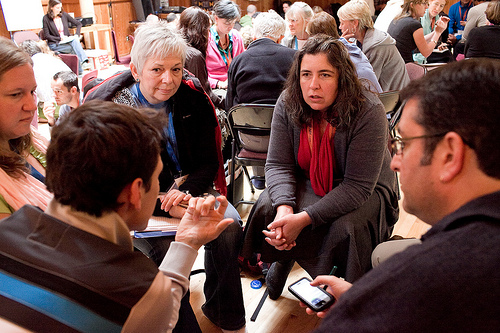 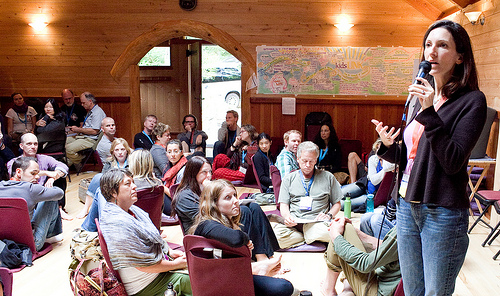 Take the participants. Their ideas flowed as freely as the coffee (I had lots just listening). Inspiration has a funny way of breeding motivation, which fuels collaboration. And around it goes. It was quite a treat watching it in action. Not every conference allows you to sit beside a fair trade coffee producer one day, an eco fashion designer the next, discuss the challenges of building playgrounds in war-torn countries one moment, and listen to a Harvard-educated researcher advance the use of psychedelic drugs for PTSD an hour later. It was a veritable hodgepodge of stories, postulations and persuasions – but all starting and ending with social consciousness. 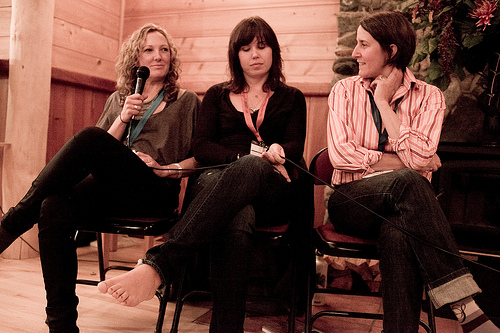 The level of honesty and openness that permeated SVI, meanwhile, was something I had never seen before. Under the veil of non-disclosure, some attendees even voluntarily placed themselves in the hot seat, courageously sharing their challenges, fears and dreams with a team of experts and oft-outspoken audience members, eager to support, delve deep and constructively advise (of course, with a disproportionate number of consultants in attendance, some comments may have carried a *slight* promotional bent. But compelling fodder nonetheless). 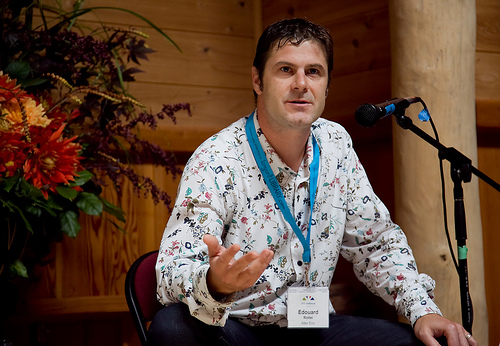 And then there were the presenters. I was particularly fond of the True Confessions sessions which saw successful entrepreneurs talk openly about their road to glory, offering transparent tales of the good, the less good and…well, everything in between. Take Mike Hannigan, co-founder and president of Give Something Back, California’s largest independent office supply company and fourth largest overall in the state. Following the Newman’s Own model, GSB –  a founding B Corporation – donates an average of 75% of their profits each year to nonprofits selected by customers and employees. Since its inception in 1991, GSB has donated more than $5 million dollars to community organizations in need.

Intriguing story aside, Hannigan was one of the most refreshing SVI speakers, hands-down. Honest, straightforward and downright funny, the man demonstrated that self-deprecation is not a lost art. To wit: explaining why he’s not the number one office supply company, Hannigan stated simply, “We’re not WB Mason because I’m not that good a business person.” 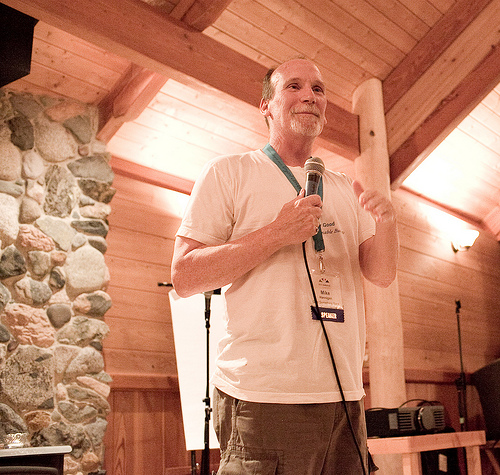 Mike Hannigan, President and Co-Founder of Give Something Back Photo Credit: Sara Dent

Mike Hannigan, President and Co-Founder of Give Something Back  Photo Credit: Sara Dent

According to Hannigan, the winds of social change in the US started blowing some 20 years ago, whereupon venture capitalists began investing in socially responsible ventures. Evidently, it’s come a long way, but with the emergence of the BCorp and other initiatives, he’s excited by the business model taking shape. Though, he cautions, “business itself is not the solution.”  We need to be social eco-activists. “We need to control the economy, not just complain when it screws up.”

Interestingly and almost counter-intuitively, the company doesn’t ask its customers to pay a premium for GSB’s beating (or is it bleeding?) heart. Citing a somewhat surprising statistic – 70% of Newman Own purchasers are unaware of where profits go – Hannigan approaches his company’s social consciousness with a sense of pragmatism. “Our customers make no sacrifice for buying from us,” he asserts, explaining prices are kept low. Loyalty is the intended consequence. The same can be said for GSB employees, who enjoy full benefit packages and the chance to support their communities.

Hannigan can certainly teach entrepreneurs a thing or two about melding profit with social motive – and doing so without the dangerous assumption that every customer need share their idealistic worldview to make a venture worthwhile. Idealism has its place, to be sure, but businesses rarely succeed without a healthy dose of realism. Offering quality products and services at competitive prices doesn’t hurt either.

It’s a view some at that nighttime party were grappling with when chatting with me that evening, and will probably be examining for a long time to come.

When the music finally emits its last beating breath, we shuffle back to Hollyhock, winding our way less-than-gracefully through the Cimmerian-like forest, flashlights at the ready. The group proceeds to the hot tub. This Torontonian heads to bed. You know what they say, too much of a good thing…at least that’s the story I’m sticking to.

A special thank you to the stunning and conveniently located St. Regis Hotel in downtown Vancouver, where Elisa stayed en route to Cortes Island.