Tackling the Food Security Crisis in Northern Canada: One expert weighs in 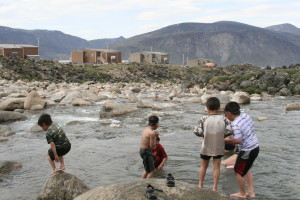 We continue our series examining food security in Canada’s north.

Nunavut is Canada’s newest territory, officially joining the federation in 1993. Being home to some of Canada’s Northern most communities, it holds a certain amount of mystery for those of us down south. Its mostly Inuit inhabitants have overcome geographical isolation and extreme climates for centuries. Today, the most significant and life threatening issues facing these Canadians is simply having enough food to eat. Food security is an ongoing problem for the majority Indigenous population who are struggling to adapt to traditional lifestyles and modern imports of all kind.

The Root of the Problem

I sat down with Dr. George Wenzel, a geography professor at McGill University, specializing in Inuit culture and society, to discuss the root causes of this crisis, and the possible solutions. Dr. Wenzel has spent over 45 years living with, and studying the populations in the Northern Arctic. He has many published works regarding Inuit food security, among other topics, based on his extensive fieldwork. His office is an extension of his kindly, if somewhat eccentric, professorial demeanor, with papers, pictures, and books covering every square inch.

He thoughtfully answers my questions from behind wire-framed glasses. “The food system in Nunavut today has two parts; market foods which are brought in by air, or through sealift and sold through retail, and the traditional [or country] food sector, which is primarily supplied by hunting activities of individuals. The food that’s produced traditionally is moved in a process we would call sharing.” Sharing in the Inuit sense is a complicated process of kinship ties and social obligation – traditional food sharing works as a form of personal currency.

The high price of importing market foods to isolated regions goes hand-in-hand with a contemporary shift to wage labour, resulting in the inability for many to afford basic nutrition. Before European contact with the North, Inuit received 100% of their daily calories from hunting and fishing activities. The semi-nomadic groups thrived in practically inhospitable environments by utilizing the resources around them. Specific diets vary but include caribou, seal, fish, a variety of whale species, and small game animals. Exclusively consuming meat is unusual for other Canadians, but Inuit actually receive a sufficient amount of nutrition from these sources. Dr. Wenzel reveals that, “Inuit had a perfectly adequate diet before anyone brought any vegetable into the north.”

Are Greenhouses the Answer?

Which is why some solutions to the food security crisis currently plaguing the nation’s Inuit have been criticized. One strategy in particular has been to install greenhouses so that the populations can grow their own fresh vegetables and herbs. This well-meaning solution is an example of transplanted ideas that, “just don’t fit the context” according to Dr. Wenzel.

“To me it’s a novelty. I see these things as kind of luxury items and oriented more toward non-Inuit… You’re dealing with people’s tastes, there’s no reason why Inuit can’t eat tomatoes, but most don’t like the acidity. Inuit are also not very spice oriented.”

A decidedly more Indigenous solution is appropriate given the demography of the region, he offers.

Curious about what a more culturally appropriate solution would be, I asked Dr. Wenzel his thoughts on where funding should go to alleviate the problem. “My view is that there shouldn’t be as much money put into the market food sector, but instead more strategizing around that traditional food sector.” The high cost of store-bought food makes a healthy diet unattainable for Inuit with very limited monetary income.

He adds that, “The majority of Inuit are underemployed or unemployed, so the best investment in a dollar of food is in a bullet. A lot of people simply need gas and can’t afford it… to go hunting for a day just with fuel and ammunition is probably $30-50. A single person living on welfare is probably getting $500-600 a month, just a few trips is a whole rent payment.” Tools such as snowmobiles and guns have been adapted into Inuit’s traditional practices making hunting more efficient, but also more costly.

Navigating traditional and contemporary ideologies is a difficult reality for Indigenous nations all over Canada. Matters like food security and access to traditional lifestyles are not only Indigenous issues – they’re also Canadian issues. And they must be addressed in such a way as to ensure solidarity and understanding between both groups.

SEE Change intern Samantha Scalise is currently living in Montreal studying international development at McGill University. Focusing on culture and society she hopes to use her degree to promote positive social change locally and globally.