In the good ol’ Greece of yore, the agora was a much-heralded political and commercial space where Athenians would gather to buy and sell goods, discuss politics, and share ideas. Some of the greatest thinkers of the time—Socrates, Plato and Aristotle—were known to shoot the sh*t in this public assembly, engaging in oft-heated yet always delightful philosophical discourse and banter. It’s not hard to imagine Aristotle’s concepts of leadership and human potential finding their first group of ears in this noisy town square. Leaders create environments that fuel others to realize their potential, he was known to say. 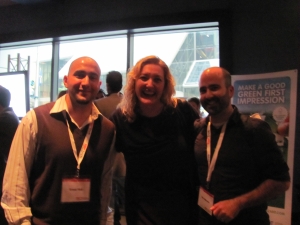 In fact, it’s been argued that some of the world’s most significant ideas were “born and raised” in this meeting place, shaping our world for centuries to come. Ideas like democracy, for example, a uniquely popular notion considering it came on the heels of the tight-fisted rules of tyrants and aristocrats. Likewise, participating in governance, deliberating judicial issues, and electing public officials were deemed a privilege and honour for every free citizen (the term “idiot” [idiōtēs] originally referred to those who declined to take part in public life).

So what does all this have to do with TEDx? A lot. The September 30th event may have taken place in 2010, in a temporary assembly space, but the Athenian influences were palpable. For one thing, though the room only held 300 attendees, viewers were streaming in from near and far, all hoping to share in the event. Most importantly, though, the raisond’être of our gathering: the discussion of ideas—bold, glorious, didactic, deductive, inspirational, all-consuming—would have made any political theorist blush (with Plato declaring the speakers “philosopher kings,” but I digress).

Here’s the thing about ideas. They’re powerful. Not only in their ability to inspire, confound and configure, but in their capacity to motivate, and promote discourse and debate. They push us to reach outside our self-contained box of understanding and pursue our potential, our call to action, which was the underlying theme of this year’s TEDxToronto. 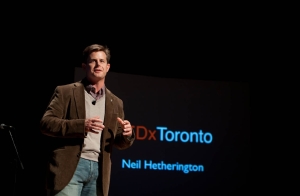 The ideas that came out of our agora this past Thursday—some brash and brazen, others pure and simple—gave us all reason to pause, think, and act. From Drew Dudley’s hope that we embrace our inner leader, to Dr. Catherine Zahn’s insistence that we open our eyes to discover, discuss and demand a better life for those facing mental challenges, and Neil Hetherington’s inclusive community-building model, one that instills eventual homeowners with a sense of pride and ownership (and his directive to stop watching Extreme Home Makeover, where that sensibility is lacking).

Amanda Sussman reminded us that politicians can make good partners if relationships are pursued effectively, stating, “Incremental reform is the triumph and frustration of our democracy. But change happens in small steps.” And Tonya Surman introduced us to the notion of community bonds as powerful tools of potential. Social change cannot succeed by the efforts of one person alone, she added, though social networks are only as effective as what we do with them.

Trey Anthony’s call to action was to remain true to oneself and be fearless. Break out of your restrictive self-generated box, she added, and by gosh, leave the job you hate (a standing ovation followed). “Dive into your fear; one cannot discover new oceans unless you have the courage to swim away from the shore…even at risk of drowning,” opined Anthony. Along those same lines, George Kourounis left the audience with this thought: embrace your fears for the worst thing you can be is comfortable. 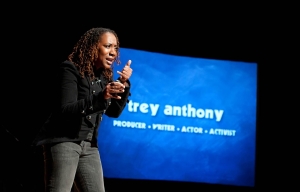 The French writer Victor Hugo wrote that nothing is stronger than an idea whose time has come. How right he was. Ideas are at the very heart of social change and the speakers who promote them embody Aristotle’s notion of leaders – inspirational GPS’ on the road to human potential. As such, our city’s new agora, TEDxToronto, established its place in the world of thought, provocation and action.

The term Ideagoras, coined by Don Tapscott and Anthony D. Williams in Wikinomics: How Mass Collaboration Changes Everything, refers to Internet sites where people gather to exchange ideas and solutions. It would only be fitting for us to coin a term for our new agora set in motion by TEDxTO. Call-to-action-goras may not exactly slip smoothly off the tongue and I already feel Plato’s rolling eyes mocking me. But it’s a start.