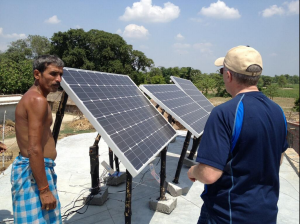 “Do you mind if I roll up the window?” New Delhi was one of the most polluted cities on earth and I was happy to limit my first hand experience to the fifteen minutes I spent waiting outside the airport.

I was to begin my new position with an NGO in the southern most state of India, Tamil Nadu. Coincidentally, a friend had also relocated to India earlier in the year to work as a policy analyst for a corporation vying to build solar plants around the country. On my way south, I paid him a visit, a weekend layover in Delhi.

An obliging host, he had come to pick me up from the airport. We drove into the city. Both of us were advocates of social change and the conversation flowed towards my work, and his.

The company had just spearheaded a project to relocate a small village to make space for a solar plant. After meetings and negotiations with the village committee, the matter was put to vote, and the village was to relocate. Residents were to receive what would be considered a very generous financial compensation by the local standards for their departure.

It was a result of a democratic resolution. Nevertheless, the decision was not unanimous, and several from the minority who had opposed the construction of the solar plant were less than pleased to uproot their lives. The company received hate mail, some threatening the field staff of the company and some threatening to commit suicide for the life change they were forced to make.

My friend was resolute in proceeding with the project. “From this contract, the villagers will have more money than they could have ever imagined,” he explained. “Ten, twenty, thirty-fold of what they could have earned in a lifetime slaving away under the scorching sun day after day. It’s a chance for them to have a new start – to invest in something or themselves or to move to a city for a better job. It will open doors for them if they were only willing to try.”

I felt uncomfortable observing his unwavering confidence in the face of a death of another human being. I stirred in my seat and turned my head to the window. We had entered the city center. Under the overpass were a slew of tents, some more deserving of the name “blanket fort” than tents. Nearby lay stainless pots, water pails, laundry, and whatever meager possession that belonged to the owner. When the traffic light stopped us, a group of children between the age of six and twelve swarmed around the car, knocking on the windows, panhandling.

“Look at this, pure human misery,” said my friend. “This is the only country in the world that still has the Bubonic plague. For them to move forward, changes are necessary – changes that may require sacrifices.” The point was hard to refute. Three hundred million people in India lived without electricity, a privilege the rest of humanity has enjoyed for over a century.

He slammed down his closing argument: “Why should millions go on living in the dark ages because of a few losses? Why should these disgruntled farmers continue their status quo at the expense of an entire district? If they refuse to move forward with society, that’s their choice.”

For dinner I insisted the last supper before the commencement of my new job be a steak. I suspected the rural region where my placement will take me would not allow such blasphemy. Dining upon a thick slab of beef, I made my opinion clear: “How can you say it is their choice? Their education level, their limited scope of experience doesn’t allow them to have the same view as you and I, or anyone from developed nations.”

We were, after all, devouring an animal Indians considered holy. We were foreigners. An outsider was not entitled to make judgments on what he or she could not understand about a nation and a culture. It was anachronistic to hold the farmers to the standard of high-mindedness of modernization, of social change, when their circumstances never allowed for them to aspire for it.

I continued, “Farming is what their families did for generations, it’s what they’ve done their entire lives; it’s what their world comprises of. Of course it’s frightening for them to move on, even impossible. The project could bring more good than bad. It doesn’t change the fact that the farmers are victims, of the current of social change. It’s not some idle self-infliction nor is it simple obstinacy.”

He retorted, “We are all meant to adapt. Humans, especially. That’s how we have climbed to the top of the food chain without claws, or fangs, or wings. Those who are unable to adapt, unfortunately, are simply unfit for the new age.”

Was Mother Nature the villain then, and her accomplice evolution?

The new age had begun May 2014 when the new Prime Minister Narendra Modi decided to make amendments to the land acquisition bill of India. The incumbent was praised for his drive for progress, but at times criticized for the ruthlessness with which he carried out his objective.

As one of the several changes it brought, the amendment to the land bill removed the consent clause as well as the limit to the amount of land that can be acquired by development projects. Fear stirred among the farmers and landowners, who reacted with vehement opposition, sometimes with violence against others and themselves in protest.

According to the theory of evolution, we would have abandoned the duty to care for the sick, the elderly, the differently abled, or anyone who does not possess the average competencies, but we have not. Instead, we created the concept of human rights, social welfare and charity. We dedicate our resources to protect those who have been given less – be it physical strength or the more conceptual opportunity – because we have evolved not only to adapt, but also to have empathy and conscience in our larger frontal lobe.

My friend believes the most advantageous trait of humans is adaptability, but I believe altruism is the true mark of humanity, while I admit how naive that may sound.

Controversy continues in India over the land bill. From building solar plants to improving infrastructure and expanding urbanisation, land acquisition is a necessary process in development India seeks as a country.

How the government will balance progress with its cost – obvious concerns for the larger development sector – we’ll have to wait and see.

Tara Lee is a freelance writer based in India, where she works for a grassroots NGO organisation specialising in community based public health initiatives. She has written on topics ranging from art, culture, technology and economics while studying journalism at the University of Hong Kong.