The Effective Executive by Peter Drucker

The Definitive Guide to Getting the Right Things Done.

Pretty much anyone who has even peripheral involvement with the business world has heard of Peter F. Drucker, the “father of modern management.” In his lifetime (1909-2005) he published 39 books and served as a consultant to many of the biggest companies in the world, including GE, IBM, and Coca-Cola, to name a few. But despite his eminence, he never forgot the importance of the worker and the ability of the individual to effect change.

Indeed, The Effective Executive is all about how the individual must learn to be effective so that he can be successful in whatever endeavour he undertakes. And I use the male pronoun here on purpose because if there is one thing I noticed throughout this book it is that Drucker first published it in a time (1967) when all, or nearly all executives were male. Women served an organization as secretaries and dutiful wives throwing lavish dinner parties. If you’ve seen Mad Men, you can almost picture Don Draper reading a copy of this book while sipping a rye at his desk. 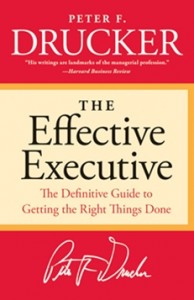 That being said, there is nothing dated about the actual advice that Drucker offers. His five practices essential to business effectiveness are as relevant today as they were 45 years ago:

It’s logical, it makes sense, and as the subtitle of the book tells us, it’s all about getting the right things done. Therein lies the real challenge for entrepreneurs, and especially social entrepreneurs, who have not only a profit motive but a social one as well. Which are the “right” things to focus on. What should take top priority? It’s a bit of a chicken-and-egg quandary but luckily Drucker provides something of a roadmap for making those decisions. He says, “courage rather than analysis dictates the truly important rules for identifying priorities:

Reading through this list, it is surprising how well Drucker’s advice lends itself to social entrepreneurship. In fact, Drucker himself states (and keep in mind he was writing this in the mid-1960s) that “effectiveness reveals itself as crucial to man’s self-development; to organization development; and to the fulfillment and viability of modern society.”

Perhaps that is why Drucker’s work stands the test of time. Unlike so many other forgotten management tomes that focused on how to be the “top executive” or “get rich quick,” he sees business as only one part of a viable society, not the raison d’être it so often appears to be. And he asserts that the knowledge worker, at all levels, has the capacity to create change through personal effectiveness. And that’s something toward which we can all aspire.

Nicole Zummach is the co-founder of SEE Change Magazine. She has worked in the publishing industry for more than a decade, and has spent most of her career researching and writing about civil society and the nonprofit sector. Contact her at nicole@seechangemagazine.com