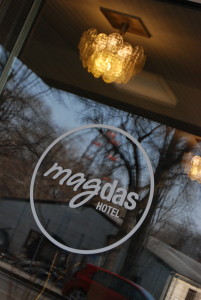 Refugees are operating a newly opened hotel for tourists in the Austrian capital of Vienna. They’ve already managed the first days with a full house. Writer Iris Mostegel gets a firsthand look at the exceptional project.

The spring sun floods the lobby with light. Two old couch chairs with flowered patterns invite visitors to relax, while low jazz sounds waft over from the bar. Nearby a hotel guest inquires at the swanky reception desk about the wifi password. “Please be aware that these are lower case letters,” explains the 29-year-old receptionist Dinis* from Guinea-Bissau with a concentrated look. The tourist smiles and nods.

Just a few weeks ago the Magdas Hotel opened its doors in the Viennese Prater district, which marked the start of a unique social business project, the only one of its kind in Europe. Otherwise excluded or merely tolerated footnotes in the labor market form the hotel’s core team – 20 refugees welcome guests from all corners of the world in 21 languages as receptionists, barkeepers and service personnel. In the day-to-day operations they are supported by five industry professionals and a job coach. For many, it is their first job in this line of work, if not their first job altogether. 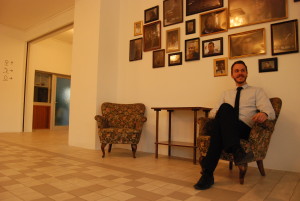 Dutch hotel manager Sebastiaan de Vos knows each of the 20 refugees. Their photos hang on the wall behind him.

Solving social problems with market economy rationale, giving people who didn’t land on the sunny side of life a perspective – these are the goals of the Austrian Caritas organization, which launched this project and entrusted Dutch hotel professional Sebastiaan de Vos with its management. The 28-year-old is still visibly charged up. While the Nigerian housekeeper Chichi* is gracefully heading towards the elevator, the Dutchman is briskly coming from a meeting. “It’s running well. We even had a few days at full capacity already,” he beams.

Irrespective of its social foundations, the Magdas Hotel has to run well as a professional service provider – it has to be self-sustaining as there is no public funding and the guests expect the comforts and service to which they’re accustomed. Therefore, besides breakfast and laundry service, the hotel offers wifi, bicycle rental and child care, as well as a bocce court.

Seventy-eight rooms are housed on four floors, with the interior a distinctive mix of vintage and stylish design. A view to the famous Vienna “Riesenrad” adds to the appeal; just a few hundred metres away the giant Ferris wheel quietly spins its rounds. 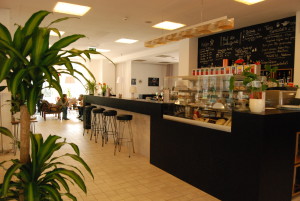 The bar offers Styrian beer and good wines, as well as a dozen sorts of tea, coffee and Austrian “Apfelstrudel”.

A German businesswoman is standing in the lobby with her suitcase; she is departing today after a two-night stay. “Totally charming, I really liked it very much,” raves 29-year-old Wiebke Kutscher. “Besides, it is a terrific idea.”

One part of this idea was to also give the 20 refugees a symbolic face: Right at the entrance, behind the two flowered couch chairs, their portraits hang on the wall − 20 faces that tell stories of war, violence and trauma. People who no longer have any big dreams, but who merely want to lead a decent life and work, often after years of waiting for their refugee claim decisions. And who are now glad to have finally found a legal job with a commensurate salary. 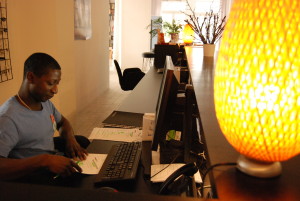 Like 37-year-old Maryam* from Morocco, who was forced to leave her homeland because of her sexual orientation; she was only granted asylum after 12 years – her position as a service staff member at Magdas Hotel is her first real job. As well as 50-year-old Rasuli* from Afghanistan, who fled from the Taliban and eked out a living by doing odd jobs. The former businessman is now the building services assistant at the hotel.

Or 29-year-old Dinis* from Guinea-Bissau, who leaked secret documents from the presidential palace to the press as a young man and therefore became a target of the regime. Actually he wanted to go to Stockholm, but his train stopped in Vienna – and he stayed. He is happy with his job as a receptionist. “Finally,” he says, “I can provide for myself.”

Magdas Hotel was pre-financed with a loan from Caritas. The former senior citizens’ home was converted and completely modernized with € 1.5 million; once the hotel is in the black, the money will be paid back. Another 57,000 Euros came through crowdfunding, which was added to donations from companies and support from private donors – after the project became known, people from all over Vienna brought plants and books for the library.

However, there is one thing hotel guests will not find in many rooms: a television set, a conscious decision. Since Magdas Hotel particularly wants to be a place where people talk to each other. And listen, too. Especially to those who up to now have hardly known anything other than being an anonymous number in refugee statistics.

*Upon the hotel staff’s request, no surnames are mentioned.