The Maasai: Doing it for themselves

On a recent media trip to Kenya, my world seemingly turned upside down. Morning wake-up calls consisted of playful hippos twelve feet from my perch. Lions, monkeys and leopards danced in our midst. And I fell asleep to the sounds of aptly titled bush babies stomping about the porch and giraffes foraging delicately outside my tented cabin.

And then there were the people. On the one hand, outstretched hands, torn clothes and bare feet followed us everywhere. On the other, was sheer exuberance, pure joy, smiles from ear to ear and children waving, crying “jambo!” as far as their voices could carry. The juxtapositions begged the query: where does true happiness lie? 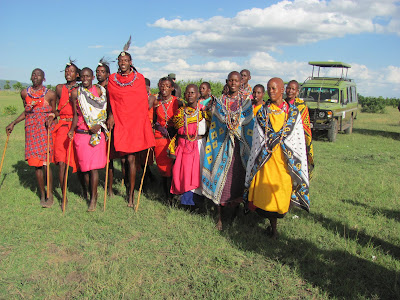 One particular group made the question even more complex. The Maasai are undeniably the most visible tribe in Kenya, though they represent less than two percent of the population. Semi-nomadic, they’re known for their unique garb – sheets, typically red, wrapped around their body, beaded jewelry, shoes made of tire strips – and their eye-catching adumu – “jumping dance” (historically a mating ritual, now also a tourist draw). Traditionally, the Maasai subsist on blood, meat and milk, hence the significance of cattle in their lives. At one village, in fact, cows and goats shared their owner’s living quarters: huts made of cow dung, mud and grass.

I’m sure if the Maasai had their way, they’d be left alone to feed off the land, acquire just enough cows to secure an average of four wives (10 per) and enough children to keep tradition strong. But it’s not that simple. Over the years, much of the land they depended on for grazing in Kenya and Tanzania was converted into wildlife preservation parks like the Maasai Mara game preserve and the Nairobi National park. Nevermind the long drought which left many cattle dead and the Maasai livelihood at the precipice. 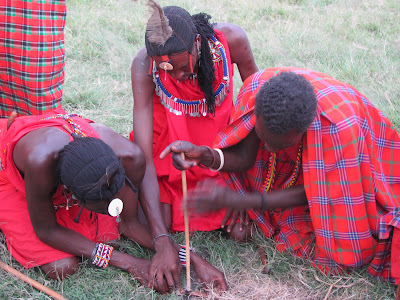 The situation has forced many to look for non-traditional means of sustenance. For a minority that means a complete overhaul: university degrees, moving away from home and becoming professionals. For others it means getting paid to perform their ritual dance, charging tourists for village tours and selling beaded jewelry. Here’s the thing: every Maasai woman knows how to create the traditional beaded jewelry. But only recently did the focus turn to attracting buyers in the outside world.

Of course, if entrepreneurial efforts aren’t properly executed, they may be for naught. Take the Maasai markets, the obligatory culmination of each village tour. It’s not uncommon for someone walking by the tables of handicrafts – beaded jewelry its main draw – to be harassed, sometimes aggressively so. Pulled to and fro, with shouts of “how much lady?” is common with pleading eyes greeting you at every turn. I don’t doubt the situation is grave and sense of desperation high. But after spending quality time engaging the Maasai in profound and intimate discussion, the off-putting behaviour stands in stark contrast, leaving a bittersweet taste in one’s mouth, making one mutter “there must be a better way.”

The good news is more successful self-sustaining models are taking root. Take a look at the Oldarpoi Maasai Safari Camp, a tented camp situated directly outside the Masai Mara National Reserve. The 40-acre accommodations is solely owned and operated by the local Maasai community and built with all the comforts of home, including hot showers, plush beds, mosquito nets and front porches. It’s quite a feat, especially considering the simple lives Maasai lead only a few miles down the road, with nary a shower or bed to their name. Mosquito nets? Forget about it.

Then there are social enterprises like the Leakey Collection run by Philip and Katy Leakey, a couple who lived among the Maasai in the Kenyan bush and witnessed firsthand the impact of the drought. Determined to provide their neighbours with work opportunities without affecting their cultural traditions, they taught the Maasai women how to use their advanced beading skills with another sustainable resource: grass. Dyed grass strands are then mixed with glass beads and the resulting Zulugrass jewelry is sold online and in stores worldwide. Most significantly, the initiative has inspired over 1400 hundred Maasai women to become entrepreneurial contractors without having to forego their traditional lifestyle.

Times may change but, as these examples demonstrate, tradition and modernity can co-exist and enterprising approaches can have fundamental impact, if done right. As we leave the village, 19-year-old Thomas LeKen, the son of the village’s revered medicine man, pulls me aside. One day soon he’ll get a degree and establish a career in community development, he says, his eyes growing wider than I had seen them all day. As if to justify his proclamation, he explains, “We are becoming civilized, we are getting educated, we are changing.” But nothing changes overnight, he continues, sounding a lot wiser than his 19 years. “Everything in life goes by steps.” One small step for the Maasai, one giant leap for Kenya.