The Toilets No One Used: How cultural sensitivity can impact success on the ground 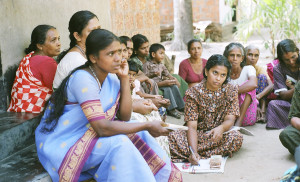 “Director Seal engea irka?” Where is the Director’s stamp, Julee asked, holding the stamp pad in her hand.

“Theriyadu,” I don’t know, I replied. After two months in Tamil Nadu, I had picked up enough of the Tamil dialect to make small conversation. I was the only foreigner in the organization, or the entire town for that matter. I was also the only English speaker at the grassroots NGO, with the exception of the director. The handful of phrases I learned went a long way.

We spent the next two hours frantically searching for the stamp – used to validate official documents – rummaging through the desks and all the cupboards. “Theriyala,” I said again with a frustrated shrug. I had spent an entire day the week before organizing the stamps around the office. Although my official position was fundraising and communications intern, I took care of everything that involved English and anything the situation required. NGOs are almost always underfunded, understaffed. It came with the territory that my work ranged from grant writing, human resources and project development to marketing. But, in addition to those duties, I self-prescribed another onto my agenda: improving office maintenance.

The office had around 70 stamps laying about, shared by the accounts and administrative teams to accompany letters and documents we sent out. Some of them were tossed in recycled ice-cream tubs, while others found their way into random boxes with other stationary items. I categorized them by function and frequency of use, numbered each, and made an index to locate them with ease.

Initially greeted with enthusiasm by the office staff, the system quickly fell apart. Stamps didn’t return to assigned containers and index pages went missing. I was reminded of the cautionary tale shared among NGO workers about a mission that built western toilets in an African village, but no one ever used them. They simply didn’t suit the villagers’ custom and they saw no use for them. It was a well-intended project to improve sanitation and living conditions, but something was lost in the process. Perhaps no one followed through by educating the villagers on the importance of a proper waste-disposal system. Perhaps they would have preferred a different initiative. But their opinions were not taken into account.

Julee and I did eventually find the stamp. It was on the windowsill at the staircase between the second and third floor. After the scavenger hunt, I returned to cleaning up the database for intern recruitment. I researched contacts in university career centers and international offices and propositioned advertising the opportunity to students. With the help of the short-term volunteers I managed, I expanded the database to include over 300 relevant contacts. Applicants started coming in and I corresponded with a few useful contacts with whom the organization could cultivate partnerships. The majority of the international volunteers who came to the organization were travellers looking to work with the children at the orphanage for a few days, maybe a couple of weeks. A steady supply of university educated, long-term interns could genuinely benefit the organization.

I scrolled through the excel sheet filled with university names. I had put together three other databases, of past volunteers, registrations and log-in details, and past grant proposals. I had written a dozen or so templates for English correspondences. I felt hopeful, then looked at the director’s stamp still sitting on the ink pad Julee left behind and I wondered if I was installing toilets no one will use.

I feared my efforts neglected the ground reality, that they were inappropriate for the organization. I had chosen to leave my previous position in an international NGO specializing in events because I wanted to be more in touch with the communities in need. I wanted to work for a local organization, to immerse myself in the culture. The new position indeed offered this opportunity. The organization provided medical services, education and economic guidance at a local level.

But now the challenge was resolving the conflict between my work style and theirs, something I had yet to deal with having only worked in western or international firms. I focused more on organization, on efficiency but I quickly learned these values may be irrelevant in my current work setting. Organization, as illustrated by the stamp situation, was not part of their work habits. Efficiency, which I tried to demonstrate by having a daily agenda, did not hold up against frequent power outages and a slow internet connection. And delegating responsibilities to appropriate officers was difficult to adhere to with the frequent staff turnover.

In turn, I came to appreciate flexibility and proactivity. Even if I tried to book transports ahead of time, the driver may not show up for hours. Even if I spent weeks writing a grant proposal, the grant-maker may turn out to be associated with a corrupt branch of the government that would refuse to review the application without a bribe. Often, the best thing to do was, ironically, to do things without trying to deliberate on the best thing to do to –  simply go ahead and do it.

Yet, I still believed my being a foreigner could be an asset. I had fresh perspectives to offer and values that could improve work functions. I closed the ink pad and wiped the stamp clean. I brought the box of stamps to Julee’s desk and tucked it in the drawer. After all, one quality we all shared was persistence.

Tara Lee is a freelance writer based in India, where she works for a grassroots NGO organisation specialising in community based public health initiatives. She has written on topics ranging from art, culture, technology and economics while studying journalism at the University of Hong Kong.