The Value of Nothing: Why everything costs so much more than we think

Since the economic crash of 2008, publishers have been falling over themselves to publish books analyzing what happened from every conceivable angle. Most of those offerings are probably in the discount bin already, forgotten as quickly as they appeared. Somehow, among all that, Raj Patel managed to write a concise and insightful book that doesn’t necessarily focus on the crash, yet perfectly illuminates why it happened. And it’s something you’ll actually enjoy reading! 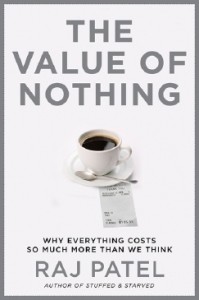 The Value of Nothing, Patel’s follow-up to the bestselling Stuffed and Starved, examines how we as a society undervalue the things that truly have value (like water), while assigning great value to things that are of little use (like diamonds). He outlines the dangerous rise of the corporation as a legal “person,” and introduces us to a host of philosophers and economists throughout history whose theories are still being used – and abused – today. And then there is Homo economicus, who is “animated by the desire to make the best of what he has in order to get what he wants.” Sounds familiar.

But Patel isn’t just rehashing other people’s observations. Instead, he takes us on a sweeping tour through history to see where and how we got it wrong to begin with, and how the ramifications of earlier economic policies, such as the enclosure of the Commons in England centuries ago, continue to impact us today. He then brings us back to the current day – to the food sovereignty struggles in India, the plight of migrant tomato-pickers in Florida – and it’s evident that history does, indeed, repeat itself.

Of course, The Value of Nothing isn’t just a history lesson. It is a well-researched and compelling argument for why we need not just economic restructuring, but a complete shift in our ideology. Patel argues that as humans we need to move away from the model of Homo economicus – individuals “pursuing, as best they can with the resources that they have, as much of a given thing as they can get.” Instead, we need to take back the Commons model that was destroyed so long ago for the benefit of the wealthy few.

The good news is that there are signs of this happening in little pockets all over the world. It probably wouldn’t be defined as a “movement” quite yet, but these positive steps forward offer a ray of hope, a way out of the situation we’re currently in. As Patel states, “A sustainable future will need markets, but ones that are kept firmly in their place lest the motives, passions and resources that a few people are able to derive from them continue to corrupt the rest of society and the planet.” Amen to that.

Nicole Zummach is the co-founder of SEE Change Magazine. She has worked in the publishing industry for more than a decade, and has spent most of her career researching and writing about civil society and the nonprofit sector. Contact her at info@seechangemagazine.com