1. “The impact of poverty on health is not an issue of the developing world,” said Rebecca Onie. “It’s an issue of poor people anywhere.” One of the winners of the 2011 Skoll Award for Social Entrepreneurship, Onie is effectively doing her part to transform the American healthcare system. In the clinics where her organization, Health Leads, operates, doctors are allowed to prescribe vital resources like food and housing just like they would medication. Once receiving their prescriptions, patients simply hand them to college volunteers who then connect them with the necessary resources. The holistic approach underlies the very basic fact that being healthy requires a lot more than literal medicine.

2. “Thank you Academy,” said Skoll winner, Madhav Chavan, as he accepted his award. “Skoll Awards are the Oscars of social enterprise,” he posited (only somewhat) tongue-in-cheek. Chavan runs Pratham, dedicated to ensuring children in India receive a proper education. Though a high proportion of the country’s students receive uniforms, textbooks and food, 50% can’t read. Hoping to change that jaw-dropping statistic, Chavan’s organization trained over a million volunteers and teachers, reaching more than 34 million children so far.

3.“Agents of change want to spark a revolution,” stated Ned Breslin, founder of Water for People. The organization partners with communities in developing countries to create sustainable, locally-maintained drinking water solutions and supports market-driven sanitation solutions. Ultimately, his organization is putting stakeholders back in control of their water systems. What’s more, NGOs and others will no longer be deaf to those hardest to reach- the poor, the vulnerable. “We will hear the roar of people, of everyone,” he stated passionately. Imploring others to join the Water for People movement, he admits, “We can’t do it alone, but we can try.” 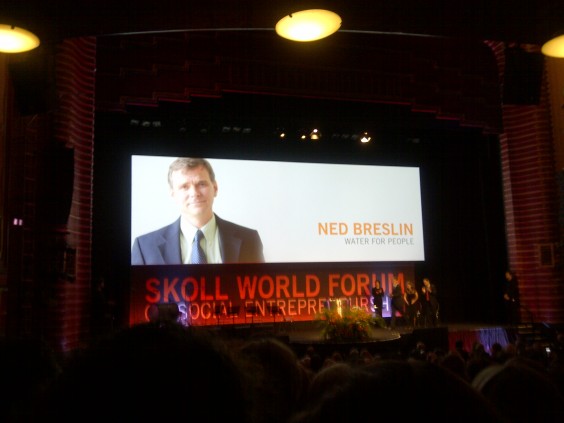 4. “Join me in making this difference,” requested Ellen Moir, founder of the New Teacher Center (NTC), helping improve student achievement in American public schools. The mission is pursued by way of providing new teachers with exemplary mentors who provide support and guidance for two years’ time. After all, Moir explains, young teachers typically feel they are on trial by fire, with no guide on how to effectively do their jobs. Her organization will build a better profession that honours and values teachers and that creates optimism and hope, she says. So far NTC has reached 1.5 million students and the aim is to get to 3 million. Something tells me she’s get there – and beyond.

5. “One of the good things about being old is you’re allowed to be repetitive,” joked Archbishop Desmond Tutu with his infectious laugh, as he accepted Skoll’s inaugural Global Treasure to the World award.  “As I grow older, I’m increasingly aware of how much I owe to others,” he added. Here’s the thing about Desmond Tutu: I could have easily created a blog dedicated only to the top quotes of this affable, funny and gracious man for he provided a bevy of magical ones. “I stand out in a crowd only because they are carrying me on their shoulders,” he said, referring again to the many who work hard in his name. “In case you think I’m being modest,” he quickly added, “it’s nothing of the sort.” He’s simply a good captain, he attested. “I recognize that people are more gifted than I, and I say ‘go for it’.” Looking around the room he stated with conviction, “God smiled when he saw the Skoll Foundation, it vindicated him. You put a smile on God’s face…thank you.” 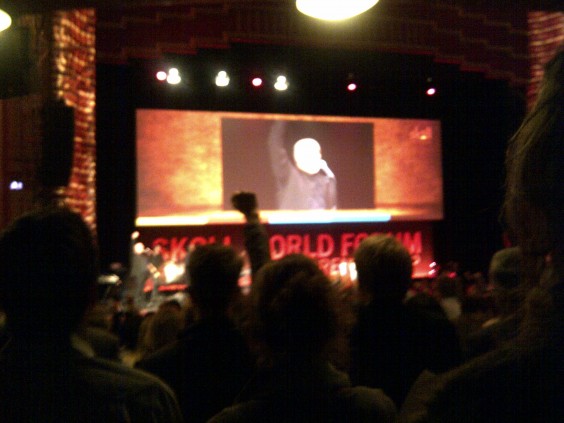 6. “You can blow out a candle but you can’t blow out a fire; once the flames begin to catch, the wind will blow it higher.” From the song Biko, sung by Peter Gabriel at the end of the awards ceremony, with particular resonance dedicated to his good friend, Tutu (Chair of The Elders, an organization Gabriel helped found). The song is about South African anti-apartheid activist Steve Biko who was arrested by police in 1977. After being held in custody for several days, he was interrogated, a process which resulted in him sustaining serious head injuries. He died shortly thereafter.