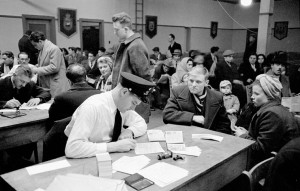 Her name was Aquitania. Born in Scotland and launched on April 21, 1913, the ocean liner was a beauty, boasting accommodations unlike any other found in the water at the time: walls decorated with portraits of Royalty and prints of English seaports, a smoking room elaborately designed using oak paneling and beams and a restaurant bedecked a la Louis XIV. What’s more, with the Titanic as inspiration, Aquitania was one of the first ships to guarantee enough lifeboats on-board for all passengers and crew.

Designed to carry 597 first-class passengers, 614 second-class and 2,052 third class, Aquitania sailed her maiden voyage to New York on May 30 1914 and her last on November 15 1949. That auspicious final journey brought my seven-year-old mother from the former Czechoslovakia to Halifax, Nova Scotia en route to her soon-to-be adopted home of Montreal, my father taking the same liner and journey only a few months earlier at the age of 10.

And it was here, at Pier 21, in the Halifax Seaport, where they wearily disembarked, along with a million other passengers between 1928 and 1971, searching for a fresh start, and a more hopeful future. Not surprisingly, the place became known as the Gateway to Canada.
When I decided to embark on this ambitious project documenting social change in Canadian history, I never expected the stories to resonate on such a personal level. I came to Halifax to interview a Dutch immigrant who walked through these doors as a teen and came full circle, working today as a volunteer guide at the Canadian Museum of Immigration at Pier 21. I was here to trace the evolving patterns and policies of immigration in Canada and how they’ve shaped who we are today as a country.

Yet, as I stood at the entrance to Pier 21, the port of a million immigrants, my feet suddenly felt heavier, as if encumbered by something, by history, by reminiscences of the past and the footsteps of the children I would later have the privilege to call my parents, and their families. What first captured their attention, I wondered. Were they welcomed with open arms? Did they see that lighthouse beyond? How terrified were they of these new beginnings?

I then thought of their respective parents, not much older than I am today, desperately searching for a safe place for their children to grow up, a place that didn’t make them feel unwelcome, undesired, inconvenient. Carrying all the belongings they could after a war turned them inside out and upside down, unceremoniously shaking out the contents of their lives, my parent’s families walked through these same doors unsure, unstable, yet grateful they were finally open (immigration in Canada was put on hold during the war, a decision that would prove controversial). And delighted to be on terra firma after a long voyage on the beautifully appointed Aquitania.

Upon entering the doors, émigrés shuffled through the assembly hall, medical facilities and beyond—whether to start lives anew in Halifax or to catch a train onto the next port called home. Some, however, remained a while in the detention quarters. Like Tibor Lukacs, who lived there for five months when his family came to Canada to escape the Hungarian Revolution, describing detention as a “prison.” The reality was, until you received an official “landed immigrant” stamp, you could be denied entry. Health issues, proof of sponsorship and lack of employment were all challenges that stood in their way. To be sure, the gateway wasn’t always easy to traverse but, for many, it was infinitely more desirable than from whence they came.

Today Pier 21 is the site of Canadian Museum of Immigration that recently underwent a beautiful facelift, part of a $30 million expansion. With over one in five Canadians today able to trace their history to this very spot, the renovated museum uses digital technology, interactive activities and other media to capture the diverse stories that make up our multi-dimensional immigration narrative. Like the story of Reva Kanner Dexter, a Polish refugee who arrived from Germany in 1948. “Canada is a country of immigrants,” she shares in a multimedia exhibit. “Pier 21 was our safe haven and it will continue to be so,” Kanner Dexter adds, arguing that reality helped maintain peace in the world.

Or Dutch immigrant George Zwaagstra who emigrated here in 1951 and now gives tours at the Museum as a way to give back to the country that let him in and that gave him what he was searching for at the tender age of 17: adventure. Interestingly, emigration from the Netherlands was so high in the 1950s that the government restricted the amount of money families were allowed to take with them for fear of destabilizing the country.

Sure enough, Zwaagstra tells me, his family arrived with one crate and a $100.00 in their pockets. No matter. “It was a fantastic feeling after six days on the ocean to see land, the coast of Nova Scotia,” he says, recalling the excitement at seeing the sign greeting all those who embarked at Pier 21: Welcome home to Canada. Though his sponsor found him a job on a Nova Scotia farm, Zwaagstra quickly traded that opportunity for others, eventually joining the Royal Canadian Air Force, working in construction at the CBC, marrying the love of his life, another Dutch émigré, and settling down in Halifax.

And then there were the war brides, 48,000 of them and their 22,000 children who came from Britain during the war years to begin their new lives with the Canadian servicemen they met overseas. But it was the late 40s and early 50s that really brought the most action to Pier 21 with approximately 100,000 refugees brought over with the help of the International Refugee Organization and hundreds of immigrants arriving illegally from the Baltic States.

As for my parents, immediately upon arriving in Halifax, they moved to Montreal where they remain till this day. Their immigrant narrative—traversing across the ocean from a place where they no longer felt wanted to their adopted home — is one shared by so many. Yet, it’s the luxury liner that brought them here, the beautiful Aquitania, that uniquely captures my attention. Like my family, the ship was tired, battle-weary, but she pushed ahead nonetheless, navigating her way through rough seas, a turbulent winter and plenty of unknowns to reach the final destination. As a proud Canadian and daughter, I’m terribly glad she did.