The UK’s first food waste supermarket has recently opened in Leeds. Described by its founders as the world’s first ‘anti supermarket’, the organization sells produce that would otherwise be thrown away. The supermarket is operated by volunteers from The Real Junk Food Project (TRJFP) and is run on a ‘pay as you feel’ basis, allowing customers to donate money, skills, or time in exchange for food. There are plans to open more food warehouses in other major cities in the UK in the near future. 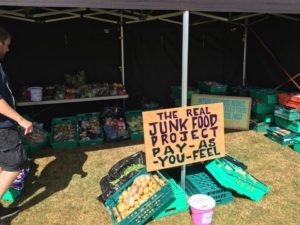 Founder Adam Smith created The Real Junk Food Project after many years working as a chef in the UK and Australia. Noting the significant amount of food wasted in the restaurants he worked in each day, he started a series of cafés serving meals made entirely of leftover food. This gradually developed into a program in which leftover food was given to schools. The supermarket came about entirely as a by-product of these programs. The team behind it have commented that they, “never intended to set up a supermarket and it should not exist.” Over the summer, it was found that the programs intending to give food to schools had an excess of supplies. The TRJFP needed an immediate response:

“We did not want to waste the food and become part of the problem we are trying to fight so we decided to open the doors to everyone and allow people to come and take what they needed and leave what they did not.”

People responded swiftly, coming in to take supplies of food that would otherwise have been thrown away. The warehouse now receives two to ten tonnes of food daily, and donates most of this over the course of the day. According to their website, food might come from a variety of sources including, “food banks, restaurants, cafés, food photographers, events and functions.”

Customers have the option of paying what they believe the products are worth, or can alternatively volunteer as a part of the project: in the past, customers have helped with cleaning, driving, stacking shelves in the supermarket, and many other activities.

Food waste is an increasingly significant problem worldwide. The Food and Agriculture Organization of the United Nations estimates that approximately 1.3 billion tonnes of useable food is lost each year across the world. The UK is a particularly bad offender – a survey by the newspaper Evening Standard suggests that up to £230,000,000 worth of food is wasted yearly. This is particularly worrying when taking into account the fact that up to 795 million people in the world, or roughly one in nine, regularly do not have enough to eat. 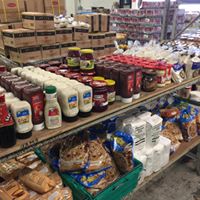 Wastage of otherwise edible food has now become so widespread that the UN has chosen to respond to it with one of their Sustainable Development Goals, a list of universal goals developed in 2012 to combat poverty and other global challenges facing today’s world. Here, the UN has pledged to reduce the amount of food waste by 50% by 2030. While big retailers have started to recognize this problem – Tesco and Sainsbury’s have become the first retailers to reveal the amount they waste publicly, and to become signatories to the Courtauld Commitment, a UK-specific agreement committing members to lower the amount of food wasted over the next ten years – it nonetheless remains an important issue.

Thankfully, the movement devoted to combating this problem is increasingly gaining traction. France’s recent laws obliging supermarkets to donate food left over at the end of the day rather than simply discarding it is just one example of this. The first food wastage supermarket opened in February of this year in Copenhagen, Denmark, run by a volunteer-led group called Wefood. Now that the UK has a similar supermarket – soon to become many, as Smith plans on introducing more supermarkets in other cities, such as London – perhaps we will see more developments worldwide.

The food wastage issue is a significant one, with tonnes of useable food being thrown away daily. TRJFP has referred to their own project as a side effect of this ‘broken system’, something that ideally would not be necessary but unfortunately is. While big supermarkets have pledged to resolve the problem, it is clear that more must be done in order to meet the goals set out by the UN, and to halve the amount of useable food wasted by 2030. For now, though, initiatives such as TRJFP’s food wastage supermarket are perhaps one of the best ways to respond to this, using community action to funnel the overflow of food to those who need it. This is a neat community-driven response to a significant world-issue, and hopefully an indicator that more will be done in future to deal with problems of food wastage arising from big retailers and other sources.

Rachel Kirk is an editorial intern at SEE Change Magazine. She is partway through a Bachelor of Arts/Laws (Hons) at the Australian National University, Canberra, focussing on English literature and human rights in international law. Her work has appeared in Voiceworks, Woroni, and Demos.