Industrial espionage is rampant. Embittered unions face off with corporations, and “America has become a second-rate superpower.” Welcome to 1985, as seen through the eyes of Oliver Stone. Wall Street is a fast-paced tour of mid-80s New York, complete with squash courts, shoulder pads, and steak tartar. It is a world of greed and excess, where a young Charlie Sheen, as Bud Fox, declares, “There is no nobility in poverty anymore.” 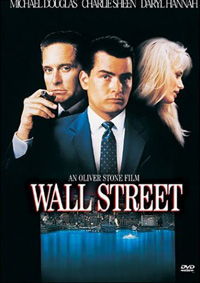 His father, an airline union rep played by Martin Sheen, reminds Bud that “money’s only something you need in case you don’t die tomorrow,” But it is the seductive lure of power and luxury, the world inhabited by business tycoons like the sly Gordon Gekko, that ultimately draws him down the rabbit hole and into the high stakes casino better known as Wall Street.

Bud Fox starts out selling “opportunities in the international debt market,” but winds up selling out his own father for a share of a bigger pie. Only once the damage is done does Bud realize what was lost in his zealous pursuit of money. Even Gekko himself, played by Michael Douglas, warns of the power of greed. Though, in his case, he is touting it as the one thing that will save “that malfunctioning corporation: the United States.” Regardless, Stone certainly positions Wall Street as a cautionary tale, a morality play of sorts.

The film received favourable reviews upon its release in 1987, with critics and fans alike viewing it as an accurate critique of the 1980s culture of excess. One need only look so far as the faux exposed brick walls that Bud has installed in his new luxury apartment to see how, in its own time, Wall Street was pointing a finger at the foolishness of it all.

Almost a quarter-century later, I find myself looking beyond the big hair and dated (though somehow still compelling) soundtrack, to the underlying exploration of society’s relationship with money and humanity’s never-ending quest for a better life. We still need money – any entrepreneur worth her salt will acknowledge that – but it seems that, slowly, our definition of “something better” is beginning to shift. There are people running companies now who don’t just care about the bottom line. And for those who operate social enterprises, there is more than one bottom line, one that has nothing to do with money at all. This is progress.

On September 24th, Gordon Gekko gets his chance at redemption in the sequel, Wall Street: Money Never Sleeps. Set in a pre-economic-meltdown 2008, the second installment will feature a “softer, gentler” Gekko, one who is trying to do better. Whether or not he succeeds remains to be seen.

In the meantime, spend a few hours on Wall Street. In many ways, it was ahead of its time and continues to be relevant today. And not just for financiers. The heady days of 1980s Wall Street are not unlike the current enthusiasm and hopefulness surrounding social entrepreneurship. Along with the risk and gamble associated with doing good, there is also room for ego and hubris. Left unchecked, even a well-meaning entrepreneur could go the way of the Gekko.

Nicole Zummach is the co-founder of SEE Change Magazine. She has worked in the publishing industry for more than a decade, and has spent most of her career researching and writing about civil society and the nonprofit sector. Contact her at info@seechangemagazine.com