Why Haiti’s Answer May Lie in Clinton, Collaboration and Social Entrepreneurship 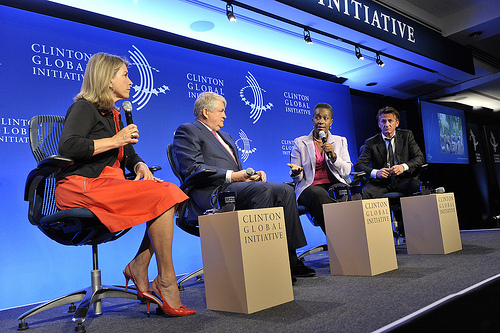 Four years after the devastating earthquake hit the nation, killing 250,000 people, Haiti is still struggling to regain its footing. It is said that more than 300,000 Haitians remain in temporary shelter, criminal activity persists, cholera and other health issues are constant challenges, while the traditional red tape is an ongoing, pull-your-hair-out obstacle.

So what can explain the sense of enthusiasm that imbued the packed Haiti session I attended at the recent Clinton Global Initiative (CGI) annual meeting in New York City?

It wasn’t celebrity-cum-activist Sean Penn’s presence at the standing-room-only panel. Though that may have helped. An unscheduled appearance by President Bill Clinton did too, while the presentation by Haiti’s Prime Minister Laurent Lamothe demonstrated a growing dedication on behalf of the region’s troubled public sector.

But there was something else: a renewed sense of dedication to the region by a number cross-sectoral collaborations. Corporations were moving beyond cheques to action. Emerging from silos, organizations working hand-in-hand with the private sector (and even government) to find solutions. Hopeful solutions, to be sure. As President Clinton stated, “The more partners we have, the better we will do. When government is working with private sector and NGOs our impact will be great.”

Thing is, there’s already been $330 million worth of commitments from CGI members in Haiti. But what was clear from the participants who shared their stories is that change in Haiti remains one of the more difficult goals, requiring comprehensive, system-wide solutions. “Haiti is the most complicated place,” opined Clinton. “It is maddening. This is not a place for the faint-hearted.” Indeed.

Becoming increasingly evident is the need for enterprising solutions. Planting the seeds of social entrepreneurship is vital to those efforts. Markets are there but business development skills and production are necessary. These needs are being met by a number of new initiatives, including one by TOMS shoes (more on that later).

As Penn, who’s working in Haiti with his J/P Haitian Relief Organization explained, “I get approached by people who want a job, an education. I can count on my hands when I was asked for money.” Entrepreneurs are waiting to explode, echoed Denis O’Brien, chairman of Digicel, a man who has made immense investments in Haiti, proving business savvy is essential to any turnaround.

Which is one of the reasons Muhammad Yunus, known more for his work in Bangladesh, recently arrived at Haiti’s doorstep, creating two organizations – a social business incubation company and a social business fund. “We have funded eight companies,” he explained. “And we’ll continue to gather more funds with our small Haitian team.” Next up for the social entrepreneur? Reforesting all of Haiti, a giant undertaking that’s already received momentum thanks to partners Richard Branson and the Clinton Foundation. 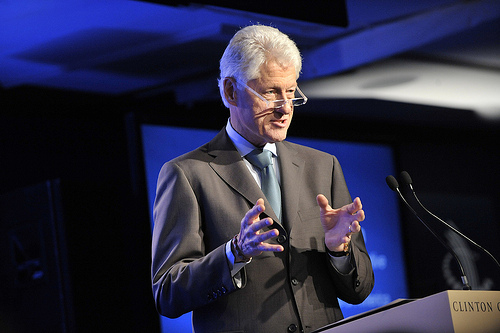 To be sure, while progress is finally showing its face, cross-sectoral partnerships are essential to moving forward. Take a look at MASS Design Group, which is working with Deutsche Bank and les Centres GHESKIO to create a health infrastructure to combat cholera in Haiti. It is the country’s first permanent facility for cholera treatment.

MASS co-founder Alan Ricks tells me that the idea came about after a stint in Rwanda made him realize that buildings can make people sicker. An outbreak of tuberculosis in that region, for example, was traced back to a health clinic. The question became, “If bad design is making people sick, can good design make people heal?”

When it comes to Haiti, hit with the biggest cholera outbreak in the last century, the more pertinent question is how to move beyond emergency responses toward tackling an endemic problem. The new facility will offer a patient-centric treatment centre and an on-site sanitation system, helping deal with healthcare, water and waste. Given that only 28% of Port-au-Prince residents have access to clean water and sanitation, its capacity to treat up to 250,000 gallons of wastewater annually is fundamental.

What’s more, with the help of the Deutsche Bank and other partners, MASS Design Group made a commitment at CGI to design ten Health and Hydration Centers in Port-au-Prince, which will include primary health care centres, chlorinated water distribution, and on-site wastewater treatment facilities to prevent recontamination. Currently in the process of raising $8 million, Ricks feels architecture can – and should—have a positive impact on life. “We just want to bring support to see a positive story coming out of Haiti. We think places like Haiti is where innovation happens.”

Creating larger impact is also at the heart of another partnership, this one between a nonprofit, Sustainable Organic Integrated Livelihoods (SOIL), and one of the world’s largest breweries, Heineken. The company recently pledged a $100 million investment in Haiti, bought out the local brewer, BRANA, and established an unprecedented collaboration with SOIL in the process.

SOIL builds ecological sanitation systems in Haiti that safely transform household waste into rich, organic compost, with the understanding that sustainable sanitation practices can fight both waterborne illness and malnutrition. “We set up specialized composting toilets and have a plant where we treat waste and turn it into soil,” explains SOIL co-founder and executive director Sasha Kramer. People pay a monthly user fee and sell compost to generate extra revenue.

This year Heineken, through BRANA, purchased 50,000 gallons of compost from SOIL for $30,000, an investment that will help improve public health and promote environmental restoration in Haiti by creating a market and demand for locally-produced compost and sustainable sanitation. “By buying our compost and getting it to the farmers that need it most, they’re supporting a local economy based on sustainable nutrient management in Haiti,” Kramer says. The compost will help farmers increase their yields, improve agricultural soil and potentially create a sustainable solution that can spread nationally and globally.

Today they may be closer to that goal.  Thanks to the collaboration, the Clinton Foundation also decided to make a grant to SOIL of $25,000 for additional agricultural research aimed at evaluating the most effective methods to boost local yields and increase farmer incomes.

The investment also represents an important shift from traditional, unsustainable aid toward social business development in Haiti. “I think we should interact with the private sector more often,” offers Kramer with a smile. She’s feeling optimistic about the increasing interest in the region by folks from all sectors. “It’s nice to see businesses with a sense of social responsibility coming in, instead of just looking for cheap labour,” she says.

Folks like TOMS Shoes, whose founder Blake Mycoskie made an exceptional announcement of his own at CGI’s Haiti session. The company, largely known for its buy-one-give-one model, pledged to build a large-scale shoe factory in Haiti. It is expected to create a minimum of 240 sustainable jobs over the next five years and a sustainable shoe industry there. They’ll also be working with the Haitian Artists Collective who will design, paint and decorate TOMS shoes.

“This is a major investment for TOMS and we feel we will have major returns,” said Mycoskie, explaining that their initial relationship in Haiti began when President Clinton asked them to send the country shoes but has since found reason to grow. The machinery is expected to rollout in December, followed by local training of Haitians. Production will commence in January, if all goes according to plan.

A major departure from TOMS’ traditional approach, one wonders if Mycoskie is listening to his critics who claim TOMS’ programs aren’t the most efficient ways to help people in need, and that job creation and self-sustaining models are more powerful long-term solutions. It remains to be seen whether this paradigm shift will follow in other countries where TOMS has presence.

Whatever the reasoning, Mycoskie’s announcement made a strong case for the ROI potential in Haiti and served as a call-to-action for other companies to follow. As the entrepreneur stated, “What brought us to Haiti is philanthropy, but what will keep us in Haiti is business.”