“Tell me and I forget.  Teach me and I remember.  Involve me and I learn.” – Benjamin Franklin

In the fall of 1727 Benjamin Franklin organized a group of 12 friends to discuss ideas for improving themselves and their community. Through the Junto Club, whose name derives from the Latin verb “to join,” its members addressed questions about morals, politics, philosophy, and business. For the 38 years of its existence, the Junto Club was more than a forum for exchanging knowledge and engaging in debate in the pursuit of truth. It also served as an incubator for ideas that evolved into public projects, such as the first lending library, a volunteer firefighting club, a public hospital, and the University of Pennsylvania. 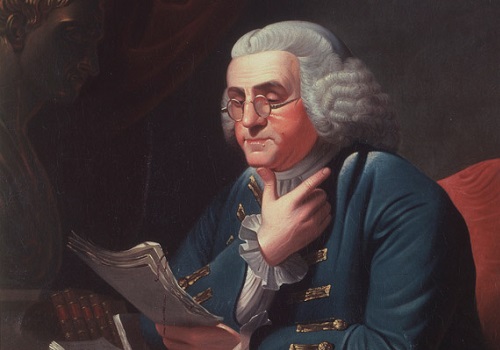 The Junto Club serves as a notable example of civic engagement, in which a number of ideas that emerged for community improvement persist three centuries later. The success of the Junto Club can be attributed, in part, to its charismatic and dedicated founder who drew up a list of questions to guide each weekly discussion.

In addition to being one of America’s first social entrepreneurs, Benjamin Franklin would also come to be known, and perhaps better recognized, for his achievements in printing, publishing, science and statesmanship.

Although we often give credit to the person who lights the fuse that ignites a spark, success in social entrepreneurship can be attributed to a variety of factors. One of the strengths of the Junto Club was its membership, which consisted of intellectuals representing different academic disciplines and professions, including medicine, philosophy, botany, and geography. When we consider the benefits of exposing ourselves to new ways of thinking and cross-pollinating ideas, the widespread and lasting impact of the Junto Club’s achievements may not be so surprising.

Another of its strengths was a commitment to collaboration that was grounded in open-mindedness and tolerance.  Participation in weekly meetings, which also involved merrymaking, enabled members to get to know each other better making it easier to build trust, which is essential for effectively working together.

“What is past is prologue” – William Shakespeare

Two modern-day social innovators (one of whom is also named Ben) are using a similar approach to re-imagine civic engagement. In 2015, as members of a Social Venture Network peer group, Jim Epstein and Ben Powell realized that they shared a vision for Washington, DC as a national stronghold for civic innovation and engagement. The DC Civic Innovation Council is an inclusive citywide effort to identify and engage local civic innovators. The purpose of the Council is to coordinate social and financial capital, making it easier to surface and scale ideas for solving tough local challenges that impede a better quality of life.

One of the first steps Epstein and Powell took was to convene a core group of supporters who collectively articulated a set of values to guide the Council’s work. These include: representation (participation that fully reflects the community), connection (optimize collaboration across resources, ideas and people), experimentation (use an agile, iterative, and participatory approach to test, refine and scale ideas), and agency (unleash the potential for every DC resident to create change for the city).

“Our city and our country need more Ben Franklins.  The power of the Junto Club is that it shows how when ordinary people commit to self-improvement, mutual support and a desire to work together for the common good amazing things can happen.” – Ben Powell

During the fall of 2017 Epstein and Powell met with leaders from the public, civic and business sectors to discuss their vision for a connected and dynamic ecosystem for civic innovators and to enlist support for a collaborative, participatory approach for forming the Council. From these stakeholder meetings over a dozen local leaders with diverse skill sets, professions, and life experiences volunteered to join a Steering Committee that will develop and launch the Council.

In January 2018 Steering Committee members met for the first time during a kickoff meeting that was co-facilitated by the two social innovators. During this half-day session, Steering Committee members participated in a detailed discussion about the concept for the Council. In addition to sharing their reactions to the vision put forward by Epstein and Powell, they also put forward suggestions to take into account as the Council continues to evolve.

Participants developed criteria to guide decision making about the kinds of activities they would work on together. Using these criteria, they identified three needs in the community (underperforming schools, lack of quality programs for youth, and division on both sides of the Anacostia River) that the Steering Committee could begin to address. Taking small actions that can continue to be built upon will enable the Steering Committee to learn which approaches work, develop community support for the Council as it is formed, and strengthen their ability to effectively work together.

“You never change things by fighting the existing reality.  To change something, build a new model that makes the old model obsolete.” – Buckminster Fuller

Like the Junto Club three centuries earlier, the Steering Committee faces a similar opportunity in learning how to support each other in transforming Washington, DC into a civic innovation capital. Working together on a multi-track process that involves determining what the Council is and how it will function, addressing immediate needs and building collaborative capacity through projects, and mobilizing funding and other resources to support this effort holds the potential for self- and community improvement. This is especially relevant as Steering Committee members grapple with the social and economic barriers that have historically impeded progress. Lessons learned from this experience will be shared with others who are interested in civic innovation.

Ben Franklin’s belief in the power of citizens to improve themselves and their communities extended beyond the Junto Club to spawn the development of similar groups across the country throughout and beyond his lifetime. His legacy and ideas continue to thrive in the 21st Century as the inspiration for the DC Civic Innovation Council.

If you are interested in joining an existing Ben Franklin Circle or starting one of your own to learn about Franklin’s 13 virtues and how to apply them to 21st Century values and leadership, check out: www.benfranklincircles.org. If you would like to get involved as a volunteer or financial supporter, contact the DC Civic Innovation Council: https://www.dccic.net/get-in-touch/

As an organization development consultant who specializes in developing networks for social impact, Kimberley has worked closely with Jim Epstein and Ben Powell, and in collaboration with other key supporters, on the development of the DC Civic Innovation Council.

Kimberley Jutze is a social activist, facilitator of social change, and founder of Shifting Patterns Consulting, a B Corp that facilitates social change by working alongside networks that increase civic engagement and hasten the transition to a sustainable economy to take collaborative action.  You can follow her on Twitter at @ShiftPatConsult and on Facebook.