Bill Gates and Bill Drayton Make the Case for Empathy 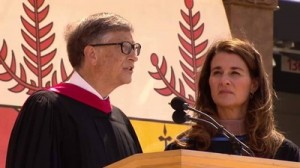 It might have been pure coincidence, but last month, Bill Drayton, speaking at Toronto’s MaRS Discovery District and Bill Gates, at Stanford University in California, made separate cases for why empathy is so important to the social change movement.

Before I zoom in on the specifics of what Drayton and Gates said, here’s a bit of background. The term ethical empathy has its roots in philosophy, the premise being that without the capacity for empathy, individuals may inadvertently harm others. In the healthcare field, the concept has been utilized in the training of physicians for some time, the focus being on developing doctors with a high capacity for empathy, ensuring they put themselves in their patients’ shoes when making critical health decisions and ultimately providing the best care possible. In the world of business, empathy has emerged as a way forward from the financial meltdowns over the years and the downright dishonesty of business leaders that got us there.

So how does this relate to the social change movement? For some time now, Bill Drayton has made the case for ethical principles as the starting point for organizational strategizing and decision-making. In the world of business, for example, this would necessitate making decisions not only on behalf of shareholders, but also on behalf of employees, customers and increasingly, the broader community. This approach implies that empathic skills are critical for today’s business leaders.

In Toronto last month, Drayton went even further, arguing that empathy skills are critical for everyone today since we all need to be social change makers.

At Stanford University last month, in a joint address with his wife Melinda to the 2014 graduating class, Bill Gates seemed to be echoing Bill Drayton’s message. You can find the transcript of Gates’ remarkshere. He challenged 2014 grads to move beyond the comfort zone that comes with graduating from a university currently ranked #3 in the world. In particular, he asked them to channel their optimism, saying it was terrific but not enough in today’s unequal society. “Optimism can fuel innovation and lead to new tools to eliminate suffering,” he said. “But if you never really see the people who are suffering, your optimism can’t help.”

A little later in the same remarks, Gates spoke emphatically about the need for technology to be appropriately leveraged for social change. “If technology is purely market-driven and we don’t focus innovation on the big inequities, then we could have amazing inventions that leave the world even more divided… we won’t cure malaria, we won’t end poverty. We won’t develop the innovation poor farmers need to grow food in a changing climate.”

So, how do we ensure the change-makers of today and tomorrow have these skills? There seem to be some interesting lessons to learn from current physician training programs around empathy. One suchapproach uses a sliding empathy scale that runs from zero to three. At zero, physicians are taking a rote compliance approach to medicine, making decisions simply based on moral rules. While this can lead to some good outcomes, the focus is on moving doctors down the empathy continuum.

Beyond zero, at level one, physicians are treating patients as beloved friends, which is better. At two they are applying the golden rule and treating patients how they themselves would like to be treated. But, at three, the highest end of the scale, they are able to make decisions from the patients’ perspective, leading to outcomes that are beyond simply medically good. Instead, they focus on the whole patient, including his/her family. If we look at the bad business decisions which led to our recent global financial meltdowns from this scale, what got us there was zero-type thinking. To avoid future meltdowns, the argument follows, we need to move to three-type thinking.

The big challenge in getting there, according to Drayton, is that our businesses, government systems and their leaders are lagging far behind. Let’s say these institutions are hovering somewhere between zero and one when it comes to empathy. In a world where everyone needs to be a changemaker, we need them to move down the scale towards a three. So, how do we make this leap? If you ask psychologists they will tell you that empathy skills are largely developed in young childhood, starting with the initial bonding between parents and babies.

So in the short term, to drive better decision-making around tough social issues (think the water supply, our food systems, climate change), we need to recruit leaders who already have these skills. In the long term, there’s a case to be made for better supports for parents, so that every child has a good chance to develop these skills.

As for our two speakers, if we ignore the urgency in Gates’ opening words and simply look at how he and Melinda closed their speech at Stanford, it seems patience is the name of the game. “As you leave Stanford, take your genius and your optimism and your empathy and go change the world…  (But) you don’t have to rush. You have careers to launch, debts to pay, spouses to meet and marry. That’s enough for now,” he said. Given the power the Gates duo have to engage the brilliant young minds at Stanford on urgent social issues, I find this wait-and-see approach somewhat disappointing.

In Toronto, however, Bill Drayton was very clear about the need for empathy education as an urgent challenge. There’s obviously much more to be heard on this subject. In the meantime, as I write this, Drayton’s Ashoka Foundation has partnered with the David and Lucille Packard Foundation in California to launch an online competition with $500,000 in prize money, searching for initiatives that, “cultivate empathy skills to strengthen communities and equip young people to become leaders of change.” You can find out more here.