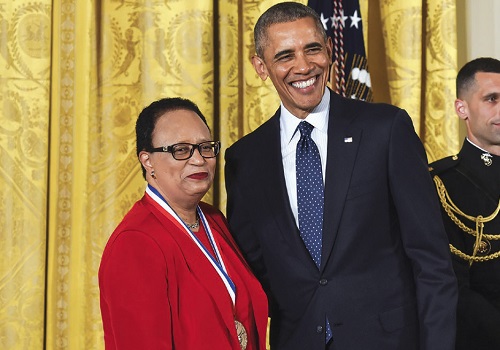 Scientists—starting with Isaac Newton—have long acknowledged standing on the shoulders of giants. But the names of those giants have tended to fade quickly when they belonged to women and people of color. That is starting to change with a new generation of activist organizations dedicated to supporting and promoting scientists who still have to fight to get the opportunities and recognition they deserve.

This work grows ever more urgent as the climate crisis accelerates: Think of all the Black, Indigenous, people of color ( BIPOC)  and female thinkers who have been brushed aside—and continue to face excess hurdles—and how much further along we could be if that were not the case. We don’t have time to ignore emerging leaders, and we need all voices (not to mention all sectors) at the table to develop durable and just solutions to the problems we face.

In honor of the one-two celebration of Black History Month and International Day of Women and Girls in Science, below we’re profiling three undersung yet pioneering scientists—all of them compelled to fight for their civil rights while pursuing ground-breaking careers—along with current projects that are carrying their torch forward.

Eunice Newton Foote: The All We Can Save Project

Eunice Newton Foote was the first scientist to propose the greenhouse gas effect. She designed an experiment that involved filling glass cylinders with various substances, inserting a thermometer and then placing them in the sun. Finding that the cylinder with carbon dioxide warmed even more than the one with moist air, and took much longer to cool, she concluded that CO2 in the atmosphere would warm Earth’s temperature. She published a paper on it in 1856, yet the Irish physicist John Tyndall is credited with identifying the greenhouse gas effect in a paper he published three years later.

There’s no evidence that Tyndall was familiar with Foote’s work, but as woman, she was literally born to be overlooked as a scientist. No doubt she knew it: Foote was also an early advocate for women’s rights, signing the “Declaration of Sentiments” at the Seneca Falls Women’s Rights Convention in 1848, which asserted women’s equality with men and argued that women were oppressed by the government and a patriarchal society.

Foote is finally beginning to get her due—the New York Times ran a belated obituary last year—and was an inspiration for The All We Can Save Project, which aims to support and advance women climate leaders. “We think of her as the first climate feminist,” says Katharine Wilkinson, co-founder of the project, with Ayana Elizabeth Johnson.

Wilkinson, formerly the principal writer and editor-in-chief at Project Drawdown, and Johnson, a marine biologist and policy expert, launched the project with their recently released anthology of women’s writing on climate, All We Can Save: Truth, Courage, and Solutions for the Climate Crisis. Climate feminism—a collaborative, creative, compassionate approach—is their prescription for overcoming this crisis, and The All We Can Save Project seeks to accelerate its spread by helping transformational women leaders realize their vision and finally pulling down the barriers that thwarted Eunice Foote.

Thomas Wyatt Turner became the first African-American to receive a Ph.D. in botany in 1921, from Cornell University, after decades of fighting for his right to an education and full citizenship. A child of sharecroppers and a Catholic, Turner worked in the fields and attended Episcopal schools because local Catholic schools refused to admit Black students. He later helped launch the NAACP and founded the Federated Colored Catholics. Turner earned bachelor’s and master’s degrees from Howard University, worked on his doctorate during summer leaves from his job there as acting dean of education, and then served as founding dean of Howard’s botany department.

The U.S. Department of Agriculture regularly tapped Turner as an expert on plant diseases, and his doctoral thesis, The physiological effects of salts in altering the ratio of top to root growth, “resonates even today in terms of the consequences of climate change, ocean levels, and the sustainability of crops,” notes Cornell. As an educator and a civil rights activist, Turner believed that mentorship was vital to the success of young plant scientists.

That insight is at the heart of the Doris Duke Conservation Scholars Program Collaborative, which aims to generate more creative solutions to climate change, habitat loss and other threats by diversifying the conservation field. The program focuses on providing undergraduate students from groups that have been excluded from or are underrepresented in conservation with the knowledge and experiences to become the conservation leaders of the future. Students have the opportunity to conduct research with and be mentored by leading academics; meet diverse conservation thinkers and professionals; gain in-depth knowledge of land, water, and wildlife conservation issues and challenges; experience extraordinary natural environments; and build a lifelong network of peers.

Program participants so far have participated in research on the effectiveness of man-made oyster shoals as living shorelines, the nesting success of hawks, forest regeneration strategies and many other studies across the U.S.

Shirley Ann Jackson was explicitly turned away from the table as freshman at MIT. She persevered, and her tenacity, brilliance and ultimate visibility in the seats of power have paved the way for young women and BIPOC scientists to build careers in science and science policy making. The first African American woman to earn a doctorate from MIT—in physics, in 1973—Jackson helped organize the MIT Black Student union and recruit minority students, worked as a theoretical physicist at Bell Laboratories, chaired the U.S. Nuclear Regulatory Commission, co-chaired President Obama’s President’s Intelligence Advisory Board, and served on the boards of IBM and FedEx. She’s been president of Rensselaer Polytechnic Institute since 1999, shaping the university into a world-class research institution.

The National Science Policy Network (NSPN) is building upon Jackson’s legacy by fostering community among early career scientists and engineers, catalyzing their engagement in policy making, and training next-generation leaders to be powerful advocates for the role of science in society. The NSPN focuses its work through a strong racial justice lens, with an eye toward not only reversing the historical exclusion of minorities from scientific communities but also elevating their policy-making voices to create a more inclusive and equitable future for all. NSPN strategies include helping network members communicate about technical and scientific topics accessibly and inclusively, advocate for smart policies in concert with academic and civic policy makers, and build robust partnerships across disciplines.

From the racial justice perspective, NSPN member Aliya Hoff describes the core challenge this way: “Science policy for racial justice requires that science policy advocates accept a dual responsibility: we must critically examine the processes involved in both scientific research and policymaking and continually interrogate taken-for-granted assumptions of ‘how things are done.’”

Bring on the brilliance

Inviting diverse people and viewpoints in the climate and environmental movements and enabling them to build careers in sustainability fields creates the opportunity for crucial questioning and reimagining.

In a Forum interview on the All We Can Save anthology, Johnson noted that when people connect women with climate change it’s typically as victims, “because today we have a system where women are even more at risk and sometimes uniquely at risk … But that’s not the whole story and it ends there all too often. When you have that kind of intimacy with the impacts of the problem you are necessarily more equipped to think about solutions. And we have to understand that when the story of Eunice gets repeated today, we’re missing out on brilliance and ideas.”

Now is the time to consign that pattern to history and let the brilliance shine. We need a bigger, more hospitable table, and we always have. The projects outlined above are just a few of those working to open that space. We hope you’ll support them all—or start your own.

Laura Deaton is executive director and Ben Jones is director of strategic partnerships at Multiplier, a nonprofit accelerator that helps path-breaking social entrepreneurs get on the fast track to impact.