Why Change is Difficult (especially if you’re a changemaker) 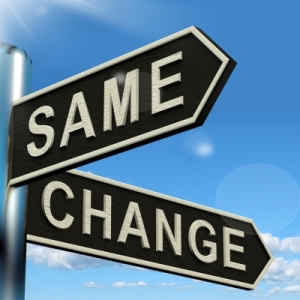 My new year’s tradition involves reflecting on what transpired during the previous year and making plans for the new one. I enjoy the satisfaction that comes from listing my accomplishments over the past 12 months and setting new BHAGs (big, hairy audacious goals). Less enjoyable, however, is evaluating my performance according to benchmarks I set for my business, especially if my results missed the mark. While it’s natural to feel disappointed, I choose to focus on the lessons learned and what can be done better the next time around.

The point here is not to endorse or criticize new years’ resolutions since it’s up to each of us to figure out what works best. Instead it’s about recognizing what makes change difficult and what we can do to better navigate this process. While the level of complexity may vary, from modifying a personal habit to transforming a social institution so that is more inclusive and just, there are certain factors that contribute to successful change efforts.

Be clear about your intention

As Alfred Einstein famously said, “Insanity is doing the same thing over and over again and expecting different results.” To put a finer point on this statement, my organization development colleagues and I are often fond of saying: “How is that working for you?” If the answer is not so well, perhaps it’s time to consider who or what is preventing you from getting the results you want and try a new approach. Through personal experience I’ve learned that when I set an intention and clearly articulate it in the written and spoken word that it is more likely to come to fruition.

One challenge that can get in the way of setting intentions is being on automatic. This is a state where our thoughts and actions are governed by established patterns of behavior, such as a routine. Automatic behavior is often useful in our daily activities in that it can save time and free up our minds to focus on other things. However, being on automatic can also prevent us from being aware of the choices we’ve made or from realizing that there are other options. Alternatively, conscious use of self requires being fully aware of our choices and selecting those that are aligned with our intentions. For example, I consulted with a nonprofit that developed a culture that manifested the problem they sought to address. When I pointed out the contradiction between their behavior and mission, it prompted a conversation with the staff and board about the desire for change.

One experience that contributed to my decision to transition careers from international aid to social change occurred during a field posting in a post-conflict region. I was working on a project that was funded by an international donor and was intended to support the re-integration of ethnic groups that had a long history of conflict. The goal was to resettle families in their original homes in ethnically mixed communities. While the nonprofit I worked for may have met its target for helping to return a certain number of families, the project ultimately failed. This was primarily because younger returning families were not convinced that conditions were conducive for remaining in their communities of origin and subsequently returned to displacement.

In our enthusiasm to address a problem we may overlook the needs of those who are directly impacted by the change we’re seeking to bring about. Even when we take the time to involve others who are affected in the change process, it’s important to make sure that we have sound and current data. This refers to obtaining information that is accurate, reliable, and timely from everyone involved, and not just the key players. It also means challenging our assumptions about what we think we know and operating from the basis of new information rather than past experiences. In this example, my colleagues and I were so focused on meeting the donor’s expectations that we neglected to fully engage returning and receiving populations in a meaningful conversation about the kind of future they wanted and their willingness to bring it about.

Create accountability for following through

An important part of change is sustaining the momentum to see it through to completion. Launching straight into task without taking the time to make sure that goals, roles, and responsibilities are clearly defined and accepted by everyone involved can cause change efforts to grind to a halt.

I was once hired to facilitate a team building process for a social enterprise that had a newly formed group. The business owner understood that building effective working relationships was essential for completing the project and agreed that one of the first steps was to develop a charter that explained the goal and how everyone would work together to accomplish it. I also helped the team establish a timeline and an accountability mechanism for completing tasks where commitments were made and progress was reported on in front of the whole group.

To sustain change intentions, commitment, and accountability are insufficient without a support system in place. This is especially true when it comes to changing our behaviors. In my work with changemakers I’ve often found a tendency to take on too much responsibility and as a consequence their personal life suffers. In an extreme case this can lead to burn out.

Not too long ago I had a conversation with a social entrepreneur that I had helped to launch a nonprofit. While a board had been put in place it was clear that the founder was still doing almost all of the work. Factors that contributed to this situation were a lack of clarity among board members about expectations and responsibilities as well as members who were not necessarily the right fit. However, what was most concerning was the founder’s unsubstantiated belief that support from the board was contingent upon reaching a certain level of success rather than inviting members to be part of achieving it.

At this point you may be wondering, given all of the difficulties in leading and facilitating change, why would anyone choose this as a career? For me, the answer is with risk comes reward. It’s more than the satisfaction of a job well done. In helping social entrepreneurs lead change within their organizations they are better positioned to do the same in their communities.

What have been your experiences with leading or participating in change processes? Let me know what you’ve learned from using these or other approaches.

Kimberley Jutze is a socially responsible entrepreneur and Chief Change Architect at Shifting Patterns Consulting where she facilitates social change by working alongside start-up and early stage growth social enterprises to help them mobilize resources and strengthen their organizational capabilities so that they can make the best use of these funds. Aside from presenting at social enterprise and organization development events, she has written a case study for the 10th edition of Organization Development and Change and is the author of the “Nonprofit Funding and Long Term Sustainability” Social Good Guide scheduled to be published in 2014. Kimberley has a Master of Science in Organization Development from Pepperdine University and a Master of Arts in International Politics from American University.