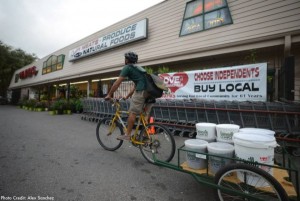 After years of transforming food scraps into soil in a north central Florida college town, the urban composting startup BikeCompost will bring their expertise out of the Earth and onto the screens of social entrepreneurs everywhere.

On March 20, BikeCompost will launch a virtual training initiative called BikeCompost Camp, to support new community-scale composting programs as they sprout in cities across the globe.

BikeCompost grew from Gainesville Compost, one of the earliest bicycle-powered community composting businesses, which represent a national trend toward a small scale and distributed approach to composting, as opposed to conventional industrial hauling.

According to CEO Chris Cano, BikeCompost Camp will be a digital platform for up-and-coming compost entrepreneurs to successfully launch their independent local businesses, and receive weekly support from facilitators, fellow participants, and Cano himself.

Camp will take place across six weeks, with each week focusing on a different aspect of starting or running a small-scale urban composting business. Topics will include business planning, equipment and infrastructure, member recruitment, and more.

“The first year of starting my program in 2011, I felt a bit isolated. This was before the incredible growth in community composting that has taken place over the last four years,” Cano said of the movement he’s helped to inspire.

A report from the Institute for Local Self Reliance (ILSR) called “Growing Local Fertility” a community composting trend. The ILSR recently invited Cano to give a keynote address at the Cultivating Community Composting national forum of the January 2016 US Composting Council Conference in Jacksonville, Fla.

In his speech, Cano described a pivotal moment, when he got to ride bikes in Los Angeles, Calif., trailer in tow with Michael Martinez of LA Compost, who had begun his similar program a year after Chris on the west coast.

“As I biked along with Michael, in the beautiful southern California weather, and looked ahead at the mountains and sky-high palms, I couldn’t believe my mind,” Cano said. “I realized that if our humble program in Gainesville could inspire a similar initiative in the second biggest city in the country, then I could make a real difference.”

Since then, Cano and his crew have shipped custom-built bicycle trailers to community composting programs in LA, Chicago, New York City, Austin, and others. And Cano has spoke with and supported aspiring compost entrepreneurs in cities across the world.

BikeCompost Camp will build on these interactions by providing digital resources, one-on-one guidance and virtual support sessions to participants. BikeCompost is also working on a suite of free webinars, the first of which was conducted on Feb. 14, to expand access to community composting educational resources.

“With BikeCompost Camp, we want to take everything we have learned on the ground over years of community composting and deliver it to the people who are most inspired to join this movement,” Cano said. “The more people we can reach through our efforts, the stronger our communities will be, and the more healing we can instill for the planet.”