CoPower’s Green Bond Helps You Invest in the Planet

So, you say you want to invest more consciously. That you want a portfolio you can be proud of, one that better reflects the issues you care about and less of the ones you don’t. It’s your money, after all. Why not put it towards causes that matter?

Well if the issue you support is the environment – look no further than CoPower. Launched in 2013 with the goal of helping everyday investors support clean energy projects, the company offers a simple online platform to make it possible.

Their flagship product is a green bond. The 6-year, five percent and four-year, four percent Green Bond allows you to invest in small-to-midsize climate-change-fighting projects across Canada. As of 2019, 1,100 clean energy projects – including LED retrofits in condo buildings across Ontario, BC and Alberta, Solar in Ontario, as well as residential geoexchange installations in Québec & BC— have been pooled into a diversified portfolio of loans that Canadians can invest in.

Here’s how it works: CoPower makes loans to clean energy projects that are generating or are expected to generate steady, predictable revenue – whether by selling clean power or by reducing energy consumption. The loans are pooled into investment products and, as clean energy developers repay their CoPower loans, that money flows through to the Green Bond investors as interest payments. 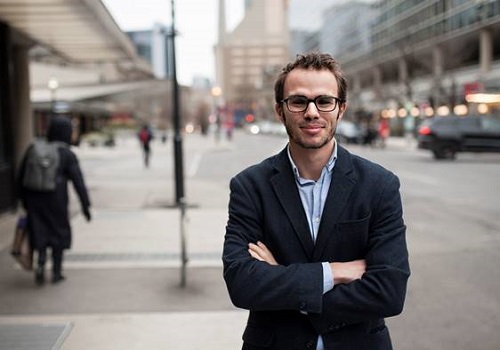 “We help people put the planet into their portfolio and take an easy first step in their impact investing journey,” shares co-founder and managing director, David Berliner. It’s an especially significant mission considering the importance in building sustainable infrastructure and clean energy projects to the fight against climate change.

Here’s the thing: big-scale clean energy projects are finding the support they need from Bay-street banks and investors – $300 billion invested last year alone. That’s why the types of projects CoPower supports are at the community level, where the biggest barrier they face in attaining scale is a lack of funding. They may be smaller—hence, the difficulty in securing financing – but they represent a surge in clean energy transformation.

“That’s the gap where CoPower comes in,” says Berliner, who likens the growing movement and its potential to the evolution of the car. In the 1900s, he explains, cars sold for the equivalent of $30 to $40 thousand and were available to very few. With the introduction of financing, suddenly there was a mass adoption of cars by average citizens, delighted by a zero-down loan that they can pay off in instalments. “That wasn’t a new technology or innovation,” he says of the change witnessed at the time. “It was a new business model and finance innovation.”

Clean energy is witnessing the same evolution today, with solar panels the cars of the 21st century. By financing these projects, billions of homeowners across Canada will have the opportunity to put solar panels on their roofs, switch to geothermal heating and cooling and engage in greater energy efficiency.

An investment that’s good for the planet is one thing. But CoPower also responds to another ask of prospective investors: good returns that aren’t correlated to the market’s at-times volatile ups and downs. As private investments – which anyone (not just accredited investors) with five thousand dollars can invest in – CoPower bonds aren’t traded on the public markets. So, even if there’s a downturn, they continue to earn a steady, fixed return.

Solar array outside of Ottawa

The bonds are currently available, via the CoPower platform, in Ontario, British Columbia, Québec, Alberta, Saskatchewan, Yukon, Manitoba and Nova Scotia. If you’re a Canadian living outside of those provinces, there’s still a chance to jump on CoPower’s green bandwagon with the help of a securities dealer.

And quite a bandwagon it is. Since it launched, over 600 Canadians have invested $30 million with CoPower, $16 million in the green bond, the rest in directed investments (by accredited investors). CoPower has definitely secured its spot in the impact investing marketplace – one that has matured tremendously since the company began.

It’s now common practice for big banks and asset managers to devise impact strategies, driven both by the demand of individual investors as well as by intermediaries realizing that impactful investments can deliver superior returns. Generally speaking, impact investments today are often outperforming their benchmarks.

“This isn’t just a feel-good story; it comes down to dollars and cents,” affirms Berliner. “If you’re not thinking about climate change in an investment, you’re probably not thinking about big risks that can come down in the next few years.”

CoPower will be introducing new products in 2019 and hope to deploy a lot more money into clean energy and sustainable infrastructure over the next 20 years. But they also want to continue moving the sector forward. “That’s where I think what we’re doing is so exciting,” says Berliner. “It’s not just about the millions into clean energy; it’s about giving more people the impetus to consider the impact in every investment.”

Elisa Birnbaum is the editor & publisher of SEE Change Magazine and the host of its podcast. She’s also the author of In the Business of Change.