On September 20, Puerto Rico was hit by Hurricane Maria. Two months later and the situation remains dire, with many citizens facing limited access to basic needs of survival. Amidst the chaos are the invaluable efforts of individuals at a grassroots level who are making a difference.

Take Richard “Crazy Legs” Colón. If you haven’t heard of him, Colón is an American b-boy from the Bronx who, after battling his way into the crew at the age of 12, began to recruit the second generation of Rock Steady Crew members including legends like Frosty Freeze, Ken Swift, Ty Fly, Kippy Dee, Take One and more. It was around this time people started referring to him as ‘Crazy Legs’ because of his custom dance moves that were unlike anything any of the breakers had ever seen before. He is also widely known for creating one of the most recognized moves in breaking know as the Windmill.

As a resident of Isabella, Puerto Rico and active member of the community, Colón sprang into action immediately following the hurricane assembling resources to support his neighbors. His mission? To help provide clean water, power and access to safe spaces for youth during the aftermath of the hurricane.  To achieve his goal, “Crazy Legs” partnered with Waves for Water and Red Bull with the goal of distributing 600 filters in rural areas on the west side of the island where aid had not yet reached, making clean water accessible to over 10,000 people. But he won’t stop there. Through his GoFundMe page, he continues to unite the community, and raise funds to provide ongoing relief.

SEE Change had the opportunity to speak with Crazy Legs to hear more about what prompted his activism, the situation in Puerto Rico today, what he hopes to accomplish and what everyone else can do to help.

What is the situation in Puerto Rico today and the main challenges?

The situation in Puerto Rico is still very serious, with water and power being the two main issues. There are layered effects to these issues. People are dying, getting infections and there are those in the deaf and hard of hearing community that rely on communicating by way of sign language. They need to be seen in order for them to communicate when the sun goes down. The ineffectiveness of the the US, local government and FEMA to act in a speedy and effective manner has been critical to where the island currently stands. Desperate!

What inspired you to take action?

At first I was acting as a concerned Puerto Rican, but then it turned into something that is about humanity. I also was concerned with the lack of response that the crisis was getting. I felt like we couldn’t rely on the government and acted as if they didn’t exist. But, within the law. 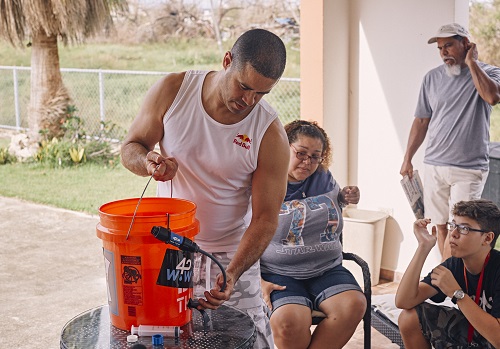 Richard ‘Crazy Legs’ Colón demonstrates how to assemble a water filtration system at his home in Isabela, Puerto Rico, September 30, 2017

Tell us about how you partnered with Waves for Water

Waves For Water and myself were brought together, because of our relationships with Red Bull. What started out as a mutual interest, is now a bond. I can’t say enough about the great work that has been done and how much I’ve learned about responding to a crisis.

What action have you taken and what’s the impact on the ground so far?

Waves For Water were more than first on the ground. They chose to ride out Hurricane Maria. They didn’t run and say, “We’ll be back”. They knew the importance of a quick response. Together we have helped about 80,000 people in Puerto Rico to have access to clean water. For all of us.

Things are still so dire on the island that this is actually helping save lives by keeping people hydrated and immune to the smallest diseases which have been the cause of many deaths since the storms. The situation has been classified as a public health crisis so these water filters are actually a huge help since it will be months, possibly years, before all of the wells and infrastructure can be restored to pre-storm conditions. 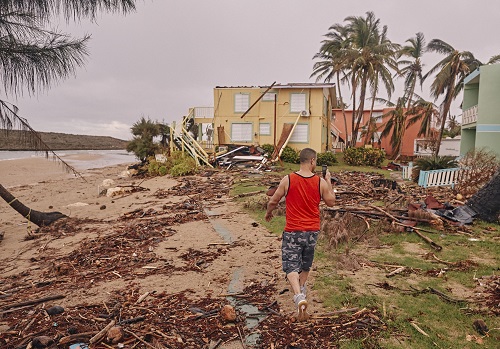 What does your experience say about the power of individuals to effect change?

The power as individuals comes from the decision to say, “I’m going to do this” and to truly put the work into making it happen. Nothing can get the work done that we’re all doing without completely diving into it wholeheartedly.

Watch Crazy Legs and Waves for Water in action in this video:

How can we all get involved?

Outside of Waves For Water, my friends DJ Tony Touch, DJ Enuff, Puerto Rico Rob, DJ G-Bo The Pro and myself started a fundraiser. We’ve been able to work out partnerships with MPOWERD. Through that relationship, we’ve sent 3000 solar lights to areas and people in need. We’ve also partnered with The 86 Company and raised $32,000, so that we can enable them to buy a generator that will open up another one of the club houses for the Boys & Girls Club Of Puerto Rico.

We have a lot more that we’re planning, but raising the money to do it is important. Anyone willing to help make a difference can donate to www.gofundme.com/rscforlife. We are not a 501(c)(3), but we are 100 percent transparent with how we use the funds raised. One hundred percent goes to directly helping the people. The only thing that gets deducted is the percentage that GoFundMe takes. People can also check out: @crazylegsbx and @rocksteadyforlife