WE Day 2016: Inspiring youth to make a difference

Founded over 20 years ago by twelve-year-old Craig Kielburger, the WE organization (originally Free the Children) has blossomed into a mega-organization educating and inspiring youth globally. The programs have broadened over the years, from focusing solely on international development, to a plethora of social justice initiatives, many right here at home. WE Day is an awareness-raising, youth-centered event held in Toronto at the Air Canada Centre each year. The event, featuring a star-studded lineup, has grown from its Toronto roots to cities across Canada, the US, and the UK, spreading its global message of togetherness.

The 20,000+ students that attend the Toronto event each year must earn their tickets by demonstrating two acts of charity, one on a local level, one globally. The ticket is often acquired through practicing generosity and commitment to change through WE programming at their schools. Gathering food or clothes for the less fortunate, selling goods to raise money for impoverished villages overseas, or starting inclusive clubs are all ways students have demonstrated their willingness to create change. The power of WE is marketed as a way in which students can act to create a positive and inclusive world. The WE Movement guides young people toward productive endeavors to prove that working together is more powerful than working individually.

WE day is filled with deafening cheers for celebrities and social justice warriors alike. This year brought to the stage acts such as Macklemore, Hedley, and the incredibly touching new work of Gord Downie. Olympian Penny Oleksaik and a YouTube personalities presented motivational speeches. Each person that graced the stage had his or her own unique cause to bring to the students attention. From drug addiction, to cyber bullying to inspiring heroes like a fire chief from Fort McMurray, Alberta (the site of a devastating fire this past May) brought raucous applause from the young and enthusiastic crowd. The day brought awe-inspiring speeches such as that from Canadian royalty, the mother of Prime Minister Pierre Trudeau, Margaret Trudeau, who promised, “If you have purpose, if you have compassion, if you have gratitude, you’ll have a happy life.” 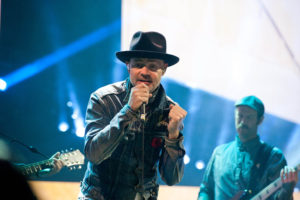 A highlight of the day was the performance of Stranger from Gord Downie’s new album Secret Path. The song, accompanied by graphic novel scenes lighting up the screens behind him was a passionate performance. He beautifully portrayed the heartbreaking story of Chanie Wenjack a twelve-year-old indigenous boy who died tragically while fleeing from a residential school in the mid 60’s. Downie has recently taken up the cause of fighting for indigenous rights, visiting isolated communities such as Ogoki Post, from where Wenjack was from. The singer and his brother brought Wenjack’s sister Pearl, a residential school survivor, to the stage to perform an equally moving indigenous prayer.

WE day brings together a variety of causes and campaigns that each hold in their heart the message of togetherness and hope for change. A truly positive day that inspires each and every student who attends to create as much impact as they can from wherever they are. Everyone has the power to be a changemaker and to make the world a better place, is the message here, all it takes is a little effort.