Dementia’s Unsung Heroes: In convo with filmmaker Cynthia Banks of The Caregivers’ Club

January is Alzheimer’s Awareness Month. With over 400,000 Canadians aged 65 and older diagnosed with dementia, including Alzheimer’s disease, we believe it’s important to use this opportunity to promote awareness of the brain disorder which is growing in impact across the country. Equally important is to highlight the people who are working hard to care for their loved ones affected by dementia – and the support networks who sustain those efforts.

We sat down with director, producer and writer, Cynthia Banks, to discuss her latest documentary, The Caregivers’ Club, what inspired the project and what she learned along the way. With its world broadcast premiere on CBC Docs POV this Sunday, January 14 at 9:00 pm (9:30 NT), the documentary (which will air again on CBC News Network on Sunday January 21 at 7 PM and be available to watch online at cbc.ca/CBCDocsPOV on Friday, January 12 after 5 PM), follows three families as they struggle to care for their loved ones.

A candid, intimate portrait of their daily struggles – one that oscillates between heartbreak, humour and frustration – the documentary highlights a devastating, and at times inspiring, journey that thousands of families will be forced to take as Canada ages.

I “grew up” at the CBC TV current affairs show, The Journal, and caught the journalism ‘bug’ from some of the best journalists in the country – Barbara Frum, Mark Starowicz, Bill Cameron and Bob Culbert. I moved to the CBC Documentary Unit as a producer with Mark Starowicz and became the series producer of the Canadian biography series Life & Times. In 2003, I left to establish my own independent filmmaking company Banks Productions Limited. I am so grateful I’ve been able to make a living as a documentary filmmaker since then and had the opportunity of working on some great issues (to view Banks’ documentary titles, visit: http://www.banksproductions.com).

What inspired this film and your decision to make it?

My father was in the hospital displaying aggressive behaviour and hallucinations due to dementia. I came in and he was tied down and my mom was crying in the corner and there was a social worker telling her they were getting ready to send him home. I said, “No, no, look at her.” For 10 years it’s been about my dad and now I choose her. “He’s not going home.”  He died shortly after that.

The system is not set up to handle all the people with dementia and especially those with behavioural or responsive behaviours.  It is no one’s fault, except the government has failed to put money into this problem. I was angry at the healthcare system and originally wanted to make a film about the difficulties in the system. 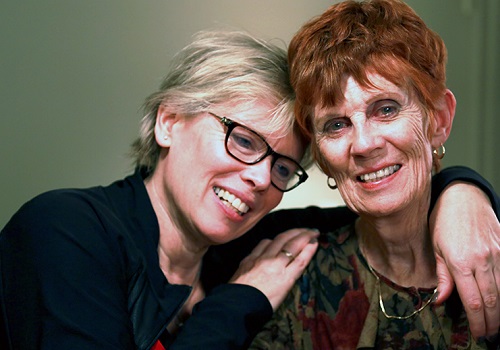 How did you finally choose the focus of the film?

At first I wanted to profile three formal caregivers – a doctor, a nurse and a PSW [personal support worker] – and through their eyes see the challenges they face with this disease and the system. But, with the help of CBC we developed the idea and it became about three at-home family caregivers. We thought we could see the failure of the system through their stories better and the challenges they face with the lack of at-home services. It was also a way to explore relationships and how to maintain them during this disease. How to cope and give some hope.

From what you’ve seen, what’s the toughest part of being a caregiver?

I have not been a 24-hour caregiver myself but what I’ve witnessed is when someone has the sole responsibility of caring for someone with this disease, it must become THE priority of life. You have to put your loved one first because of the nature of the disease and the fact that there is not enough help provided to you at home. This means that you end up neglecting your own health.

This is a major problem and I’m not sure what the answer is except having more people like our expert Nira Rittenberg of Baycrest Health Sciences, who works with individual families. Asking for help becomes a problem for caregivers because there’s either no one to ask or they don’t know where to reach out. They just put their head down and trudge the road themselves. There is often shame and a sense that they don’t want to burden others. This disease takes a village so asking for help is a must!

What were some of the takeaways, in watching the struggles of caregivers?

My dad had always been my knight in shining armour and so the conversation was always about what mom wasn’t doing, what she could do better, why she wasn’t able to keep things positive. I realized I had a huge amends to make to her so this past Thanksgiving I told her she deserved so much more thanks and support than she got and I dedicated this film to her.

What are your plans with this film; how are you hoping to help caregivers?

Some of the participants in the film and I are making plans right now to take the theatrical, longer version of the Caregivers’ Club on the road across Canada as a fundraiser. We want to raise money to provide the most physically and financially needy caregivers with 6-8 hours of extra help a week. This bit of help can make or break a family.

We are on the tipping point of a crisis in this country and caregivers need help. It’s unfortunate we have to get them help through a fundraiser but the government is not directing money into at-home help that will directly help caregivers. We need to raise the discussion about how we direct public policy to get our politicians to listen. This is what we want to do.

We need help to start this fundraising tour so if you can please donate to http://www.gofundme.com/thecaregiversclub.

The Caregivers’ Club will air on CBC Docs POV on Sunday, January 14 at 9:00 PM (across the country; 9:30 PM in NT) and again on Sunday January 21 at 7 PM on CBC News Network. The documentary will also be available to watch online at cbc.ca/CBCDocsPOV  after 5 PM EST on Friday, January 12, 2018.