Empowering People Through Robotics: In convo with Charles Deguire of Kinova 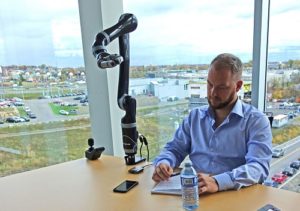 We are Canada, a six-part documentary series narrated by Sarah Polley that celebrates the next generation of passionate Canadian changemakers, premiered in April on CBC with new episodes every Sunday until May 14. Conceived and produced by White Pine Pictures, in collaboration with Ken Dryden, who serves as one of the executive producers on the project, the series profiles a new generation of Canadian innovators whose work is shaping and defining the future of the country in inspiring and imaginative ways.

To celebrate the series, SEE Change is publishing contributions by some of the changemakers profiled on the program. Today we speak with Charles Deguire from Kinova, an enterprise that is using robotics to empower people with disabilities.

What inspired you to launch your enterprise. What gaps were you trying to fill?

Founded in 2006, it all started with the inspiration of my inventive uncle Jacques “JACO” Forest. Living with muscular dystrophy, my uncle designed an ingenious makeshift arm that could pick up all kinds of objects to help with his daily tasks. Motivated and inspired by my inventive uncle, who passed away in 1993, I took up this robotic arm idea and elaborated on it. Thus was born JACO the robot arm. Launched in 2010, JACO is a six-axis robotic manipulator arm with a three-fingered hand.

Everyday activities such as scratching, picking up an object from the floor or drinking a glass of water were impossible for people with upper body limitations; now with our robotic arm they become less dependent on caregivers and enjoy an improved quality of life.

Kinova’s mission is to empower humanity through robotics. We believe that people with disabilities should focus on their education and work opportunities instead of worrying about finding someone to open a door or hand them a glass of water.

This is why, 11 years ago, we developed JACO, a simple, safe and intuitive robotic assistive device. This robot is meant to be integrated to the wheelchair of the severely disabled and to use the existing wheelchair controls to operate the robotic tool. It might be a chin control, foot control, joystick which allow them to compensate for the loss of upper body abilities.

The Kinova team has always maintained that persons with reduced mobility want to regain their autonomy not only for their own well-being but also to be able to contribute even more in their communities. So, to accelerate the development and integration of robotics in healthcare, we successfully reached hundreds of researchers and developers in more than 35 countries. They contribute their knowledge to elevate the applications of robotics technology. More recently, through these collaborations, we’ve secured strategic partnerships to produce new solutions in the area of medical robotics.

What are you most proud of, so far, in terms of what you’ve accomplished?

I am quite proud to have contributed to changing the lives of our people, our users, in a positive way. We couldn’t have dreamed of such an impact 10 years ago.

Also, the acknowledgement of technology developed by Kinova as a brand and its adoption of global leaders in the future applications of robotics such as Google, Amazon Robotics, NASA, Bosh, Toyota, Panasonic, Microsoft, HP, Hitachi, iRobot, to name a few.

And reaching 200+ research partnerships worldwide, business and technical recognitions/awards within the robotics community within the first eight years.

And the tight-knit “Kinovian” culture we created from day one, facilitating our fast growth in team members, constant quest for innovation and our success in organizational growth.

What are your greatest challenges in meeting your mission?

Kinova exports 98% of its production. Kinova would like to see all levels of the Canadian government become more involved in leading the evolution of medicine to deliver better patient outcomes here at home. Using robotics to shift focus from low value tasks to value-added activities will empower the healthcare system.

Creating the tools is eminent, but making them accessible will require conscious societal changes.

How important are partners and collaborators to your work?

They are extremely important. In an emerging market, driving this type of revolutionary change is imperative to do so in numbers to make accessibility a priority.

What is your funding model?

Kinova has used several sources of financing over the year. Mostly self-funded.

To be the 3M of robotics. A global leader that sets the standard for service robotics by empowering humanity and leading the revolution of healthcare through robotics.

How has participating in the “We Are Canada” series affected your life and this initiative?

It was a fantastic experience, personally and professionally. To be part of such an extraordinary group of passionate Canadians is quite humbling. It will always be one of my very proud life moments.

Kinova was founded in 2006 by co-founders Charles Deguire (CEO) and Louis-Joseph Caron L’Écuyer (CTO), two passionate, inspiring and visionary young bachelors in engineering. DeGuire, from Montreal, created a robotic arm dubbed JACO – an intuitive, flexible design that attaches to a wheelchair and becomes an extension of the person using it.